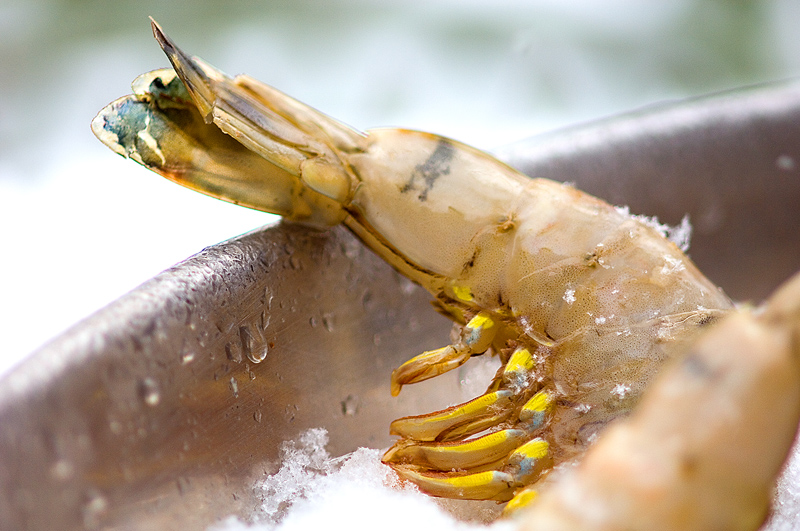 If you’re invited to a fish fry at the Harry Cope farm, you might be served some tasty pond-raised prawns.

Raising prawns is the latest in Cope’s innovative approach to farming using the resources of University of Missouri Extension and the College of Agriculture, Food and Natural Resources. 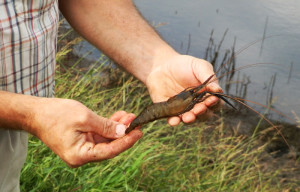 Cope said he became interested in prawns after he attended a field day at CAFNR’s Bradford Research Center in Columbia, where researchers have been raising southeast Asian prawns for the last several years.

The prawn growing season in Missouri is short because of the climate, said Tim Reinbott, Bradford superintendent. Fish, blue herons, raccoons and bullfrogs also take their toll on the crustaceans. “They have a lot of predators,” Reinbott said. “We put in 4,000 and got back less than half.” 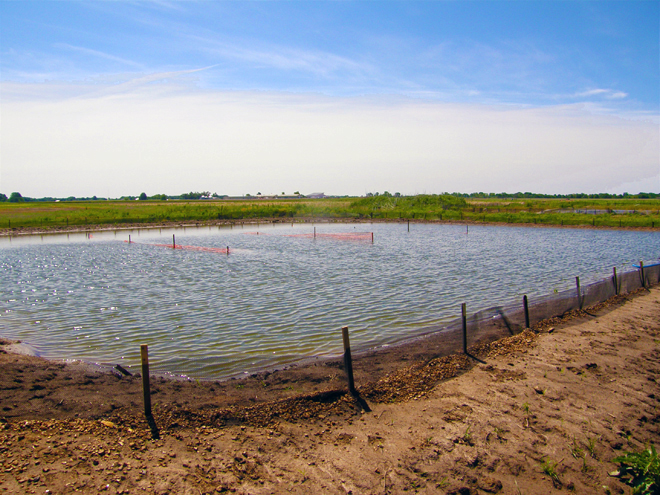 The prawns have been served in some MU campus dining halls and the Bingham Commons. They have a lobster-like sweetness and aren’t as firm as boiled shrimp.

Cope raised his fourth consecutive crop of prawns this year. The prawns belong to a species of large freshwater shrimp native to Malaysia. Prawns have been raised in the southern U.S. since the 1970s, but new techniques and management practices are allowing Midwestern farmers to be more productive with them.

Each year, Cope and five of his friends buy 3,000 juvenile prawns from a Dixon, Mo., supplier who purchases them from a Texas hatchery. Cope said the baby prawns are interesting to look at because of their translucent quality and dark eyes. “You only see eyes and a spinal cord at first,” he said.

In early June, the prawns are put in a quarter-acre pond with steep sides and an 8-inch drain and plug. The water is 3-5 feet deep. 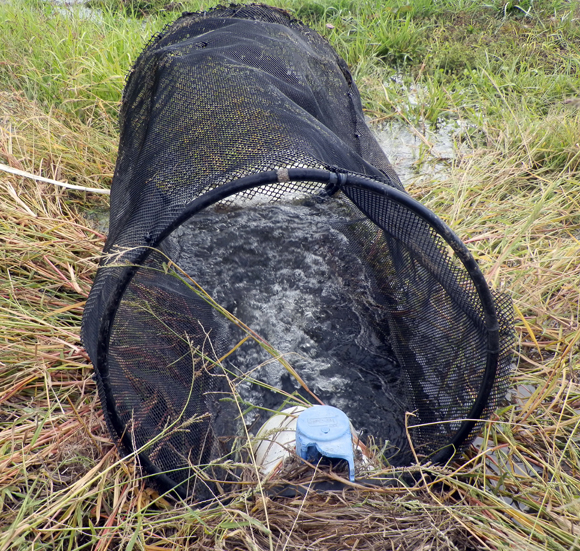 Prawns are harvested by being drained into a basket.

They grow quickly from thumbnail size to the length of a man’s fully extended palm and fingers before being harvested in late September to early October. Cope’s prawns generally are about 18-count, or 18 to a pound. The quarter-acre pond yields about 120 pounds of shrimp that sell for $10 per pound.

The Copes and friends harvest them by draining the pond. “All of a sudden, you’ll see shrimp walking out,” Cope said. That’s when the fish fry usually begins.

Cope said he worked with Montgomery County Extension agronomy specialist Richard Hoorman on this project. “Rich is a very good resource and researcher,” Cope said. In turn, Hoorman notes, Cope’s research on prawns and other innovative farming ideas has helped other farmers. Cope has made presentations at meetings and through webinars.

Cope and Reinbott agree that it would be difficult to raise prawns as a single source of farm income. “You couldn’t make a living off of it, but it could definitely add income,” Reinbott said.