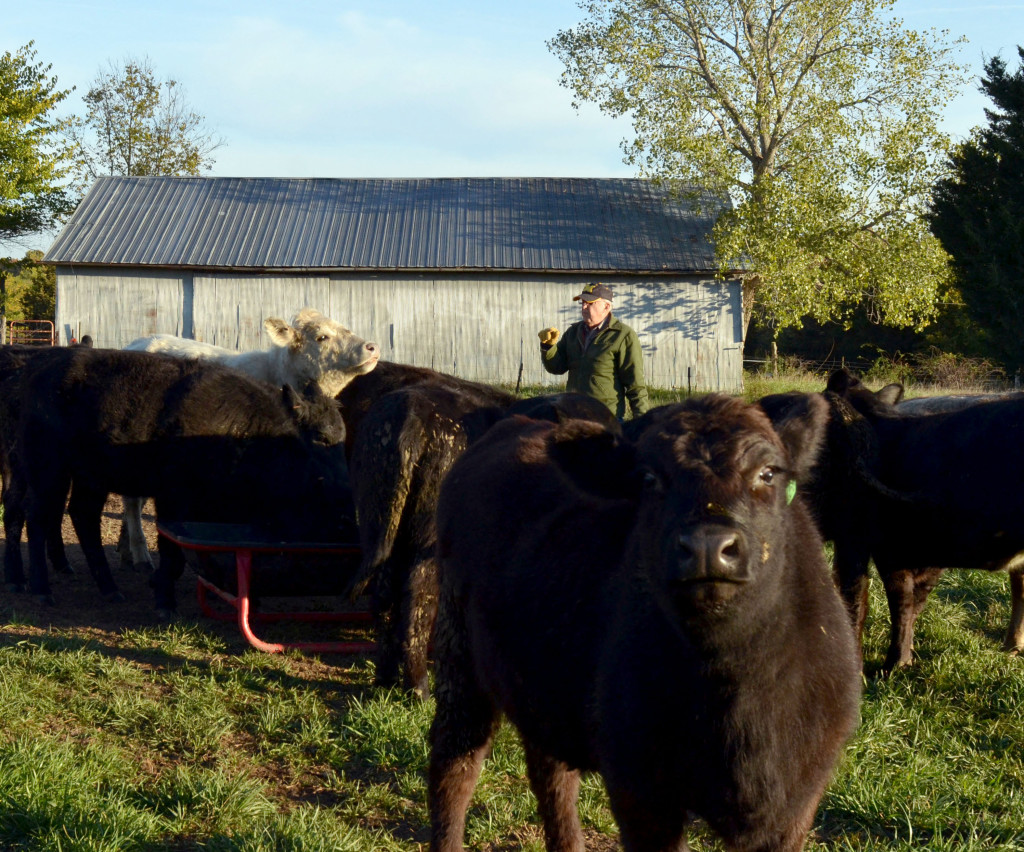 With more than 50 years of service to the University of Missouri, Fred Martz has influenced hundreds of farmers, students and fellow faculty members. Though he recently celebrated his retirement, his impact on education will sustain through the Fred and Donna Martz scholarship.

Martz’s connections to Mizzou and agriculture are deeply rooted.  He joined the MU Dairy Department faculty in 1961 and 14 members of the Martz family have taught, researched, studied or worked at MU. Martz’s father, Joe, took Martz out for chores on the family’s Indiana dairy farm when Martz was just three years old. The scholarship also honors the memories of Joe and Fred’s mother, Dora Belle Martz, who worked for the MU Office of Public Information.

In addition to providing financial support for students, Martz hopes the scholarship can serve as a conduit for connecting ideas. 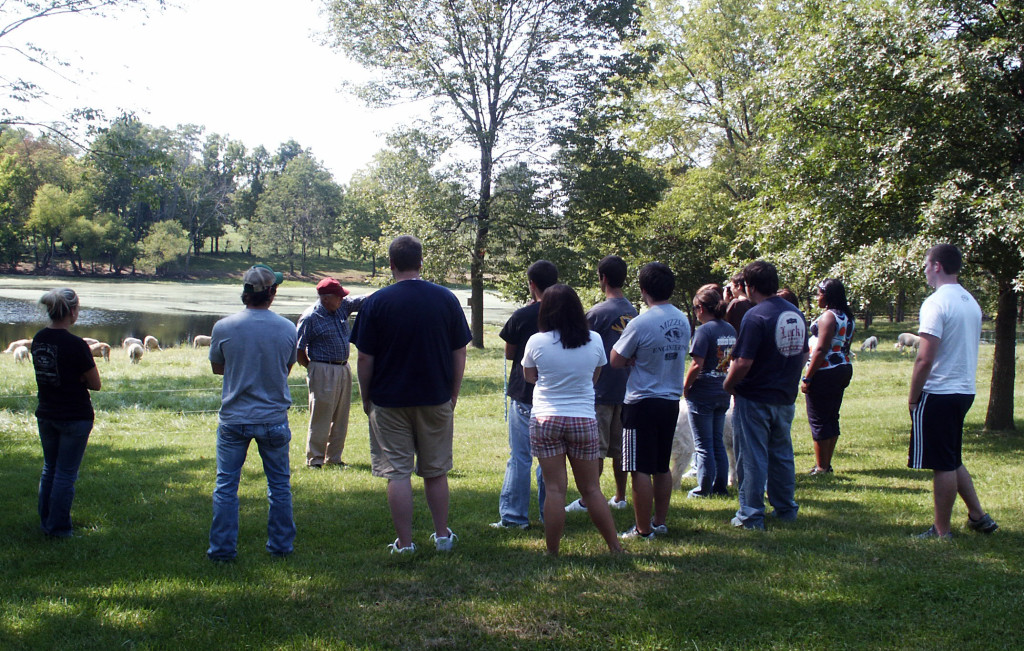 Martz helped pen the first course on sustainable agriculture at MU and has stayed involved in the curriculum since, sometimes guest lecturing or providing a guided tour of he and his son’s 450-acre beef and sheep farm just north of Columbia.

He started exploring sustainable agriculture in the 80s. “We went through the farm crisis and I began to realize we needed to do things differently and started investigating it (sustainable agriculture) more,” he said. His father had instilled in Martz a sense of the importance of conserving and improving soil through crop rotation and natural fertilization.

“One of the most important things in sustainable agriculture is to have something green and growing on the soil all the time,” Martz said.

He explained one of the tenets of his farming operation is to limit chemical and fossil fuel inputs as much as possible. They use MIG, or Management Intensive Grazing, and move cows frequently so as not to exploit the grass resource and to move nutrients (via the cattle’s urine and excrement) around the pasture.  They also test the soil every few years to get a snapshot of their nutrient profile and inform their practices.

MIG will take you further into a drought than conventional grazing, Martz said. At their farm, they made it through the 2012 drought without feeding much hay, about 20 bales. In early October, the pastures had recovered enough to stop feeding hay. 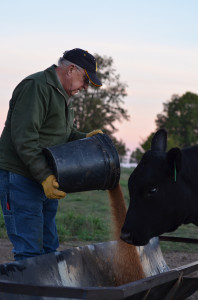 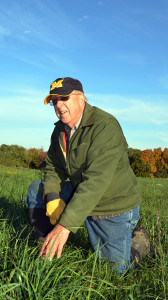 Fred Martz, MU professor emeritus of animal sciences, on his farm outside of Columbia.

Throughout his career, collaboration has been a consistent theme for Martz. He was on the steering committee that crafted the vision of the Forage Systems Research Center, where researchers develop and evaluate forage systems for all classes of beef cattle.

“Jerry Matches was trained as an agronomist and I was trained in dairy science, but we knew each other and both of us had the same thought that the disciplines on campus were much too separated, especially when it came to forages, agronomic topics and animal sciences. We wanted to bring them together for organized and collaborative research so we went to the farm and said we need to do studies with the whole forage livestock system, and the model for FSRC was established,” Martz said.

“Field trials,” however, were something Martz had experienced at a much earlier age, while helping his dad on the farm. “We used a horse-powered endgate seeder to spread phosphate fertilizer on an alfalfa field,” Martz said. “It (fertilizer) didn’t fan as widely as we expected, so there were places that didn’t get any fertilizer. We saw the difference between the fertilized and unfertilized areas in a few months—my dad pointed it out and that really got my attention.”

That spark of curiosity has led to a career of investigation, research and education to improve agriculture.

Martz and his colleagues just missed identifying the endophyte toxin in tall fescue—the predominant grass in Missouri’s pastures. Their forage fescue breeding project at the Southwest Research Center led to an endophyte-free variety supporting a 30 percent increase in animal performance.

Lately, Martz has partnered with Jordan Dawdy, PhD candidate in rural sociology and his partner, John Doubek, in their Community Supported Agriculture (CSA) project. Dawdy is exploring people’s choices and attitudes about their food, and he and Doubek had previously operated a meat CSA in Tennessee. Martz and his son Kevin provide the beef and lamb for the 40 members of the CSA, allowed Dawdy and Doubek to use some land to raise pigs, turkeys and chickens, and hosts farm walks to teach the CSA members about raising livestock.

Of all his accomplishments, Martz is most proud of educating students. He sums up his philosophy with a favorite quote from Henry Brooks Adams: “A teacher is like eternity; he can never tell where his influence stops.”

Mary Hendrickson, extension associate professor of rural sociology in CAFNR, has taught sustainable agriculture with Martz for the past several years.  “He’s been a great mentor for the students,” Hendrickson said. He always announces: ‘you’re welcome to come out to the farm anytime.’”

One of Martz’s former graduate students, Sandra Solaiman, a professor at Tuskegee University, returned to MU to give a seminar in honor of Martz’s retirement. Solaiman’s talk, “The Role of Small Ruminants in Sustainable Agriculture,” struck a chord with Martz.

“Sheep and goats don’t require a great deal of acreage and can provide meat for several families. We haven’t even begun to scratch the surface in that kind of food production here,” Martz says.

Hosting a former student for a presentation was a highlight for Martz, who is an advocate for bringing guests to campus to generate dialogue among students, faculty and staff. A few years ago Martz was a member of a campus group who invited Wes Jackson, director of the Land Institute in Salina, Kansas, to campus for several public events.

Martz believes the next generation of farmers will continue to move toward the middle—bridging sustainable and conventional agricultural practices. 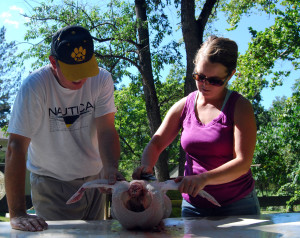 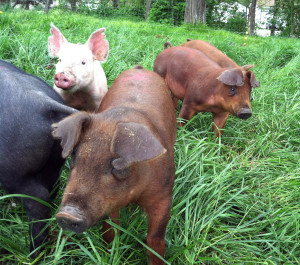 Pigs raised by Dawdy and Doubek on Martz’s farm.

At MU interest in sustainable agriculture courses and the major are on the rise, growing from two majors in 2009 to 15 currently. “We’ve been steadily expanding and attract a lot of transfer students and a broad variety of students—a lot want to be farmers but haven’t been before, some come from farm backgrounds, some are interested in educational farms and community food systems work and a lot are non-traditional students,” Hendrickson said.

What do Martz’s current students say?

“I think I have a notebook full of pearls of wisdom from Fred,” said Monica Everett, senior sustainable agriculture major at MU.

“I think it’s cool to know his background, growing up without electricity at first and before large scale mechanization and specialization in agriculture, and he went through conventional education and has a balanced approach.” Seal said. “He makes me laugh, always. He’s really just a lovely person and always seems genuinely happy to be speaking with students,” Seal added.

To donate to the scholarship fund, which supports students in animal science, soils, agronomy and sustainable agriculture programs, click here.