At the University of Missouri College of Agriculture, Food and Natural Resources, Agricultural Economics 4230 is a nontraditional class that gives students hands-on ag policy experience. Part of that experience is a trip to Washington, D.C., to meet with the people who are really making agricultural policy happen, said Scott Brown, MU assistant professor.

“Students were always interested in what we were doing at the Food and Agricultural Policy Research Institute,” Brown said, adding that students wanted to be part of the policy process. “So instead of putting students in front of a computer entering data, which wasn’t the experience they wanted from FAPRI, I said let’s construct a class that actually gives students some real experience and a chance to interact with policymakers.”

This year’s class, the fifth to make the trip, visited Washington D.C. in October.  Brown said he strives to get a broad coverage of different types of policymakers. 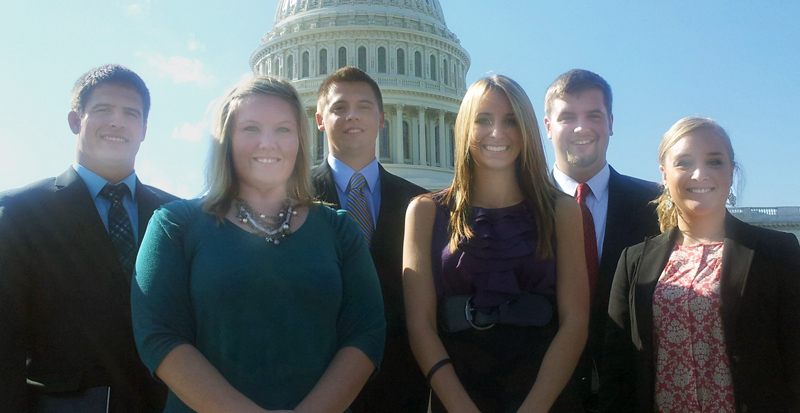 “I want them to get a sense of what it’s like on the Hill, whether it’s working in a Missouri delegation office or serving on House and Senate agriculture committee staff,” Brown said. “I’m trying to give the students a sense of who understands ag policy and how much time can they spend on it. In an office where the member is not on the ag committee, that staff person may have six or seven other things on their plate besides ag policy, so they’re going to understand the basics. Once you get students in front of the committee staff they get a real sense of the number of folks devoting a lot of time to ag policy.”

The students also visited USDA and met with staff from several of the agencies. Sydney Stamy, a senior from Mexico, Mo., says she really enjoyed the opportunity to talk with USDA chief economist Joe Glauber.

“It was just fascinating to hear his take on things and his role as an economist for USDA,” Stamy said. “It was really great to be able to tie in class material and see how it works in the real world and is affecting people.”

“It was kind of neat to think that just two years ago they were in our shoes,” said Kellen Bounous, a senior from Monett, Mo. “They didn’t necessarily know what they wanted to do with their future, but took a shot and have been very successful in D.C.”

Austin Smith, a junior from East Prairie, Mo., says that the experience has made him even more eager to work in Washington in agriculture policy.

Stamy says that the trip has made her reevaluate a policy career in Washington. “I didn’t really consider it until I’d been on this trip,” she said. “It really started to change my perspective on my future and I’m now starting to consider it.”

Brown said there are a lot of students who have gone through this class who are now in Washington working on agriculture policy issues. He wants to continue to see that happen and says that Mizzou students have a lot to offer in the ag policy process.

“I would definitely recommend this class,” Stamy said. “It is a great opportunity. You get to learn so much about what is going on in farm policy today, and how it is going to affect agriculture in the future.”