Whether the mechanism is a bulldozer or Geographic Information Systems (GIS), Christopher Fulcher wields tools for a singular purpose: to help people improve their communities.

Fulcher, Co-Director of the Center for Applied Research and Environmental Systems(CARES) in the Division of Applied Social Sciences at CAFNR, launched his career in community development on the island nation of Nevis in the Eastern Caribbean, where he served as a Peace Corps Volunteer from 1985-1987. 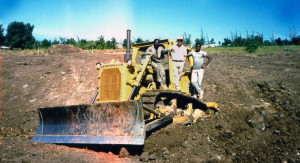 Chris Fulcher with his colleagues on Nevis.

“There’s not a day that goes by that I don’t think about Nevis in some way—what I learned, the pace of life and the wonderful people,” Fulcher said.

Fulcher, whose team was recently honored by the Centers for Disease Control and Prevention (CDC) with the Weight of the Nation 2012 Pioneering Innovation Award, has made public service his priority throughout his career. He attributed that quality to growing up in a civic-minded family. He was in the Texas A&M Corps of Cadets as an undergraduate, and was part of President Clinton’s inaugural class of AmeriCorps Volunteers in 1993. “That’s the cornerstone of CARES and that’s what motivates me—the public good,” Fulcher said.

Building trust with the local community is imperative for the community development work Peace Corps volunteers do. In some places, volunteers are accepted with open arms from the moment they arrive. In others, greater patience and perseverance is required to bridge cultural boundaries. Fulcher said several of the Rastafarians with whom he worked on irrigation projects joked that he was spy, but after they worked together for several months they were convinced he was there to help, to learn about their culture and share his own—not to collect intelligence. 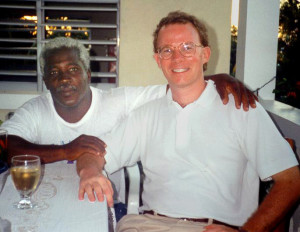 Fulcher and his colleague, Bam, relaxing after the workday.

Fulcher worked with community partners on natural resource management projects, including establishing livestock ponds so producers didn’t have to cover as much ground to water their cattle. Fulcher and his counterparts surveyed watersheds and analyzed soil types to guide where they installed ponds, levees and spillways.

He frequently toured the island’s diverse landscape on his motorcycle to check on projects. “I thought I was really going there to teach them how to survey, but Bam (one of his co-workers and a close friend) taught me more than anything. It was an amazing experience,” Fulcher said.

After his service Fulcher entered into a PhD program at MU. “I saw an ad from Peace Corps with University of Missouri on it and said I’m going to do that.” The program was natural resources management and water quality. He learned GIS and computer mapping programs and put those skills to work for his former island home. For his first graduate project, he created a three dimensional GIS map of the volcano and surrounding agricultural land and digitized all the soil types and streams on the 36-square-mile island of Nevis. “It really helped my thinking about spatial analysis, natural resources and water quality and was really very formative in the founding of our center called CARES,” Fulcher said.

CARES has been compiling, analyzing and sharing public information data for nearly 20 years. Its team uses data and integrates the 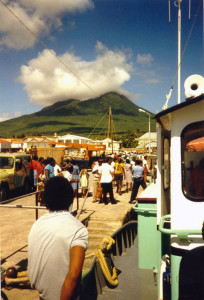 The ferry to neighboring islands.

Community Commons is one of the latest projects to which CARES has contributed its resources and expertise in an effort to empower individuals and groups across the nation to reverse the trend of obesity in U.S. The CARES team has been recognized nationally for its innovative and collaborative work creating the Community Commons, an interactive mapping, networking and learning tool to help individuals and organizations across the nation connect and collaborate to promote healthy communities.

Whether it’s access to parks and recreation, healthy food or health care, Fulcher works to help people access public information, to use it to improve their communities, connect with others who are working on similar issues and create new tools to better inform their work.

“It’s that ripple effect from experiences you have early on and how that carriers forward and Community Commons is a reflection of that public good framework; now we’re looking for ways to make it more global,” Fulcher said.

“There’s a lot of great non-governmental organizations doing work in countries around the world, but the sad thing I learned in Nevis—and Nevis is a microcosm of what goes on in many countries—the Canadians were there, the Japanese were there the British Development Division was there working on projects on the same island doing the same kind of things but no one was coordinating,” Fulcher said. “There was so much overlap and so much of what I consider money wasted and talent squandered because it’s not aligned; we can do a lot better than that and that’s what Community Commons is about.”

You can see the entire series here