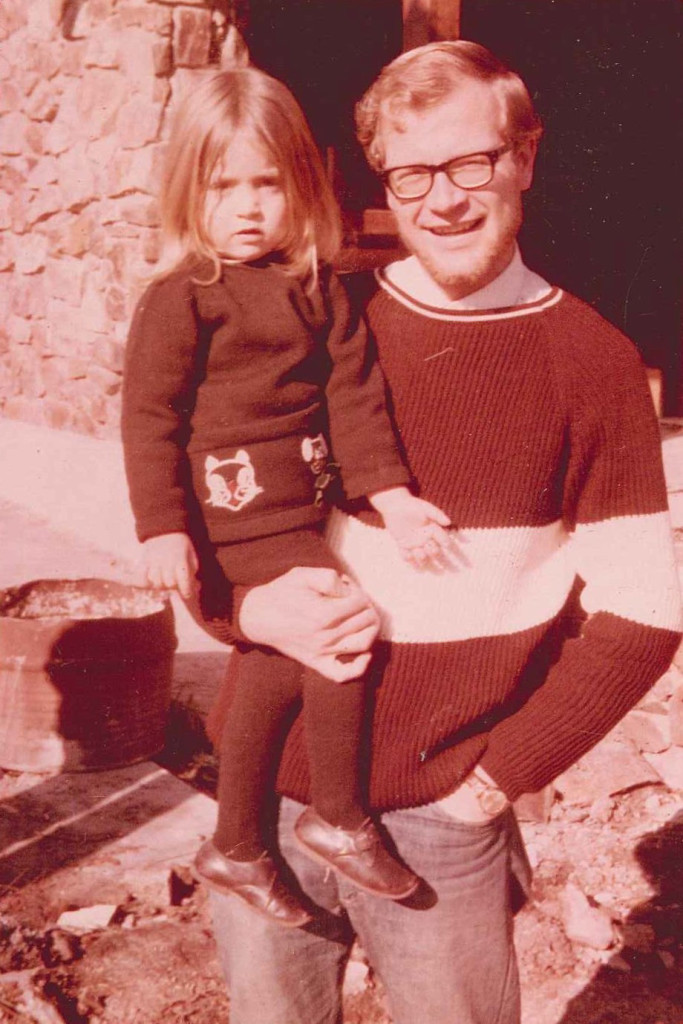 A meat tenderizer is one of Mike Cook’s most prized possessions. It’s autographed, not by Jamie Oliver, Wolfgang Puck, or any other famous chef. It bears the names of the Garre family who gave it to Cook nearly five decades ago when he was their son’s basketball coach in Uruguay, where Cook served as a Peace Corps volunteer from 1965-67.

The tenderizer was a gift from a family who had little to give to show their appreciation for Cook’s contributions to their community. It adorns a wall in a place of honor in Cook’s home, still intact, save for one missing tooth that reportedly broke off (before Cook received it) as the mother used it to defend herself from an attacker.

Since living in Uruguay, Cook, the Robert D. Partridge Endowed Professor in Cooperative Leadership and executive director of the Graduate Institute of Cooperative Leadership (GICL) in CAFNR’s Division of Applied Social Sciences, has been a CEO, counseled cooperative leaders in more than 50 countries, inspired students who have gone on to be leaders and award-winning professors and is still striving to solve the global hunger problem. He was recently honored for his contributions to scholarship, education, outreach and leadership in cooperatives with an induction into the Cooperative Hall of Fame.

Long before he became a cooperative hero, he heard the following words while sitting in his high school classroom:

“For every young American who participates in the Peace Corps—who works in a foreign land—will know that he or she is sharing in the great common task of bringing to man that decent way of life which is the foundation of freedom and a condition of peace.” – John F. Kennedy

“I was a senior at Colby High School in 1961 and our social science teacher audio streamed President Kennedy’s speech into our classroom. That day I said I’m going to college so I can go to the Peace Corps,” Cook said.

Cook went to the University of Wisconsin, where he majored in history and international relations and played basketball for the Badgers, and would later earn his graduate degrees. After receiving his bachelor’s, he applied for a rural development position with Peace Corps, but it was his basketball skills Uruguay desired.

He was assigned to coach the Uruguay National basketball team to help them prepare for the Olympics. He coached the team in the evening. During the day he taught in one-room schools, ran a physical education program and organized sports clubs for kids because sports weren’t available through schools. He still keeps up with many of the players he coached and received an email recently from one he lost track of who found Cook on Google.

His coaching duties with the national team took Cook across the South American continent. “I saw unbelievable poverty; I grew up on a farm but I didn’t know the science side of agriculture,” Cook said. “I was interested and had studied the role of hunger in international conflict. When I saw the extreme poverty in northern Brazil, I said my goal is going to be to solve the world’s hunger problem.” 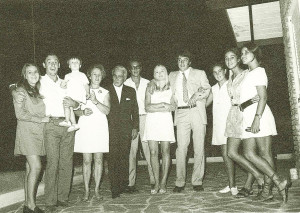 While serving in Uruguay, Cook met his wife, Juanamaria Cordones-Cook. She had just returned from a stint as an exchange student in the U.S. Her best friend and one of Cook’s friends arranged a blind date for them at the opera. “He has been my only boyfriend and we have been married 43 years,” Cordones-Cook said. “He’s a very unique human being with a brilliant mind and a unique spirituality. He’s a person of vision. Whatever subject you bring to him he will always have a very different and original take and perspective; I never get tired of talking with him,” she added.

Cordones-Cook’s father was a prominent politician, one of many Cook knew during his tenure in Uruguay. His host mother was a community organizer and his host father was the Speaker of the House. Cook keeps up with his host mom, 95, via Skype a couple of times per month.

Among his family and friends in Uruguay all four major political parties – conservative, liberal, Marxist and Marxist liberals were represented – so he heard diverse perspectives on national politics and opinions of U.S. foreign policy. “It was a great education — I received four different political viewpoints each week,” he said.

An open mind and an ability to negotiate across cultures have been integral to Cook’s successes in business and academia. “Peace Corps broadened and deepened my appreciation of other cultures and I think I’m a more patient and tolerant person because of it,” Cook said.

He imparts those lessons on multiple levels — with undergraduate and graduate students at MU, in emerging and established cooperatives at home and abroad, and at the annual Graduate Institute of Cooperative Leadership at MU. 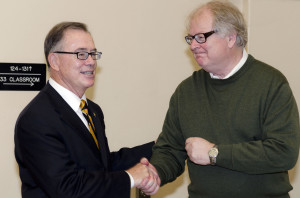 Chancellor Deaton congratulates Mike Cook at a ceremony celebrating his induction into the Cooperative Hall of Fame. Photo by Aaron Duke.

Cook introduces a Life Cycle Framework to provide insight for attendees, who discuss aligning structure with strategy, member relations, marketing, and capital acquisition—with emphasis on how to measure performance as well as the additional requirements for management in a cooperative-owned firm compared to investor-owned firms.  Each year, Cook brings industry leaders to speak to the program participants. This year’s guests included Randy Papadellis, CEO, Ocean Spray and Bill York, CEO, AgriBank. Both are members of the GICL Board of Directors.

The program concludes with emphasis on the role of leadership – with the goal of encouraging each participant about his or her potential to help find innovative solutions to the challenges ahead.

Cook hasn’t given up the global challenge of eliminating hunger, either. “We have enough technology —it’s how it’s organized. How you align, how do you get people to work together?” Cook said.  “We’re into organizational innovation: how do you create, how do you understand cultures and ways of doing business well enough that you can design incentives that become aligned and provide the most mutual benefit.”