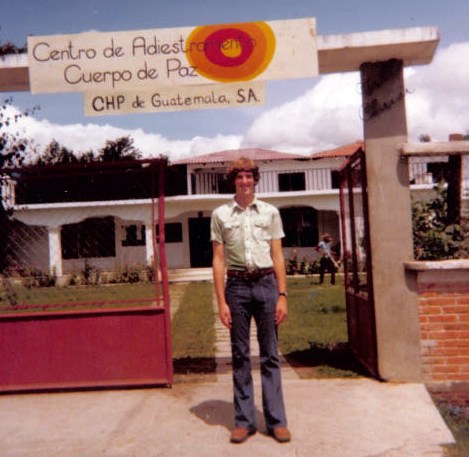 When Pat Westhoff boarded the plane to fly from Cedar Rapids, Iowa to Guatemala, it wasn’t just his first out-of-country trip—it was his first plane ride.

Westhoff, the director of the Food and Agricultural Policy Research Institute (FAPRI) at MU and a professor in department of agricultural and applied economics in the College of Agriculture, Food and Natural Resources (CAFNR), grew up on a diversified dairy farm in Manchester, Iowa. It was his on-farm experience, rather than his undergraduate degree in political science, that led to his placement as an extension agent with Peace Corps Guatemala in 1979.

“It seemed like the right thing to do,” Westhoff said of why he applied for the Peace Corps. While he took many classes in global politics in college, prior to leaving for Peace Corps he had never traveled north of Minneapolis, east of Chicago, south of St. Louis or west of Des Moines.

“I knew intellectually it was going to be a different way of doing business but actually confronting it in person was a very different thing,” Westhoff said about his work helping producers with seed and fertilizer choices and soil conservation practices in Moyuta, Guatemala. 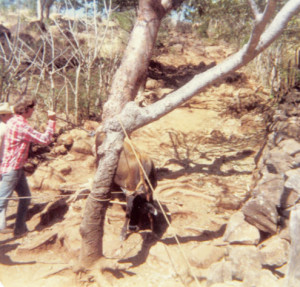 Westhoff attempting to brand cattle (the bank he worked for required that the bank brand be applied to animals they were financing), in 1980.

“I had to get used to the idea that these are people for whom a couple of acres is what they’ve got to work with and coming up with the money for fertilizer is a really big deal; if you borrow money for that you might find yourself in debt for several years if you’re not careful. It was whole different scale of operation and set of issues that were so very different than what I grew up with,” he added. 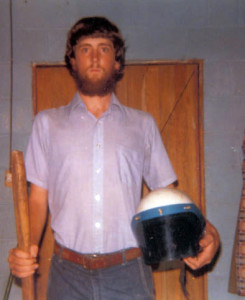 Today Westhoff works on a global scale, modeling the complex agricultural economy to help policy makers and others in the agricultural sector understand what might be in front of them and what changes in policy might mean. He presented at the annual Breimyer Seminar on the 10-year outlook for commodity markets. Westhoff’s advice is always sought after in the ever-changing agricultural market, but his insights are especially valued this year as Congress continues to debate and develop the next Farm Bill and Midwestern farmers deal with impacts of the drought.

“We do a lot of work for Congress looking at the impacts of farm policy and biofuel policy, helping Congress think through what those policies are going to mean—not just for crop producers and livestock producers but also for taxpayers, for consumers and the rest of the world. That’s the single most important thing we do,” Westhoff said.

After growing up on the family dairy farm and working with small farmers in Guatemala, Westhoff says he understands how policy impacts people on the ground.

In Guatemala, Westhoff helped members of his community collaborate for change in their local economy. The community worked to improve a local road and a created a cooperative to provide new opportunities for small-scale farmers. 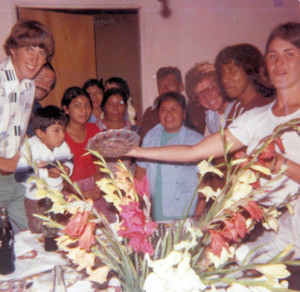 Westhoff’s (far left) 21st birthday party, put on by his host family and attended by many fellow trainees, July 1979.

He returned to Guatemala in 1988, as the country was beginning to emerge from a long and deadly civil war. Keeping in touch with his friends during that time was difficult, but by pure chance, he ran into the secretary of the cooperative he helped to start. He had been abducted and tortured by a military group during the conflict and was in town to bury his son, who died of an intestinal disease—a common cause of sickness and death in Guatemala at that time. “It was a very moving visit,” Westhoff said.

Westhoff continues to reach out globally today. He and a former graduate student he advised helped create a FAPRI-like institution in South Africa 10 years ago. Westhoff returns regularly to make presentations about the outlook for agricultural markets and to analyze the impacts of U.S. and South African policies on the food sector.

FAPRI also has active partnerships in Europe and Mexico, and FAPRI alumni now work at the UN Food and Agriculture Organization and a number of other international institutions.

The Peace Corps experience was transformative for Westhoff and his peers. Three of the four members of his group that worked with the Agricultural Development Bank in Guatemala are now PhD agricultural economists.

Westhoff’s experience advising producers in Moyuta, Guatemala opened the door at Iowa State for his graduate education. “Willi Meyers saw my application and despite having no background in agricultural economics he was willing to take a chance on me because I had been a PCV (Peace Corps Volunteer),” Westhoff said.

That was the beginning of an educational partnership between Meyers and Westhoff that has spanned 29 years at two universities. Meyers is the director of International Agricultural Programs and the Howard Cowden Professor in Agricultural and Applied Economics in CAFNR. The two have collaborated on numerous international agriculture projects in Europe, Africa and the Americas.

Westhoff (back left) and the Bureau for Food and Agricultural Policy in South Africa.

“It (Peace Corps service) gave me a much better perspective on what the world is really like and a deeper recognition that there’s a large share of the world’s population for whom just putting food on the table is a real and serious challenge every day,” Westhoff said.

It’s a challenge that Westhoff has worked on for his entire career, from small farms in Moyuta to the halls of Congress and around the globe.