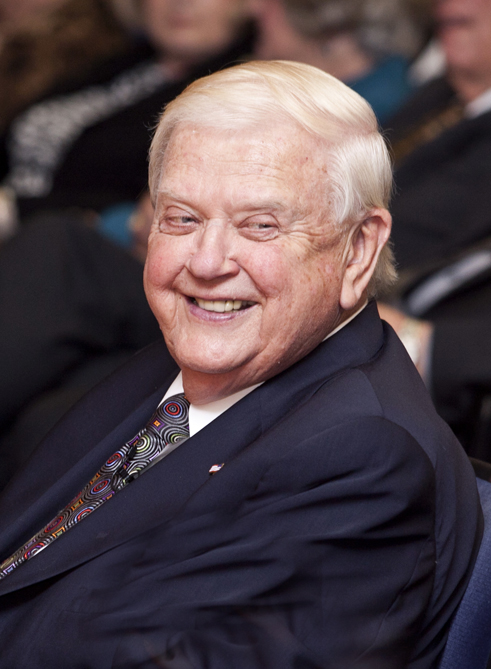 He noted that most of the students in the Monsanto Auditorium where he spoke would likely fill jobs in careers that have yet to be invented. Students must not only dream big, but they should work hard, he said. “Great leaders are hard workers who are never completely satisfied,” he said. “The world is waiting for you.”

Samuelson knows of what he speaks.  As a kid he sat on a three-legged milking stool in a Wisconsin dairy barn.  He said he would never have dreamed that he would travel to 44 countries, meet seven U.S. presidents, dine at the White House with country music legend Glenn Campbell, and meet Soviet President Mikhail Gorbachev and Cuban President Fidel Castro.

Samuelson is best known for his association with WGN Radio, serving as the station’s head agriculture broadcaster since 1960. Three years into his tenure at WGN, he was the staffer who read the news of the John F. Kennedy assassination.

In the 1960s, Samuelson hosted an early-morning show on WGN-TV, “Top ‘O’ the Morning.” From 1975 to 2005, Samuelson also was the host of U.S. Farm Report, a weekly television news magazine dedicated to agriculture. He has since retired from that position. Samuelson now hosts a similar show, “This Week in Agribusiness,” on RFD-TV.

The lecture is coordinated by CAFNR and remembers Jerry Litton, alumnus of the college who died in an aircraft accident in 1976 after winning a Democratic primary bid for United States Senate.  The fund was endowed in 2010 by the Jerry Litton Family Memorial Foundation. The foundation supports agricultural, educational and athletic activities in memory of the Jerry Litton family. 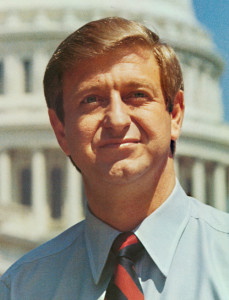 This fund provides support in several areas, including:

Samuelson told students to write their own books and include chapters on family, faith, leadership, bumps in the road, and leaders and mentors who inspire them.

“Pick your own heroes,” he said, and listed his top inspirations:  The late Norman Borlaug, an American agronomist and Nobel Peace Prize winner who has been called the “father of the Green Revolution”; Harold Brock, designer of the famous Ford 9N tractor and the John Deere 4020; and Abraham Lincoln, whose presidential legacy includes the Homestead Act, the U.S. Department of Agriculture and the Morrill Act, which allowed for the creation and support of land-grant institutions such as the University of Missouri.

Samuelson credits his own “bump in the road” as the spark for his radio career. He attended a country school and had looked forward to high school when he was incapacitated for two years with a bone disease. His vocational agriculture teacher took his lessons to him and continued to encourage him. “My vo-ag teacher did more to change my life than anyone except my parents,” he said.

Through public speaking opportunities offered through FFA and 4-H, Samuelson developed a love of the spoken word, a passion that would lead him to broadcast school.

He said his two-year illness taught him to adapt to change, a message that he frequently voices in farm broadcasts as one of the lessons of life. “Change is part of your life,” he said. He also warned students to never evaluate a happening when it’s happening.  “Give it some time,” he said.  It is important to find something that you like to do so well that you would do it for free. And when you do it well, people will be willing to pay you for doing what you like well enough to do for free, he said. 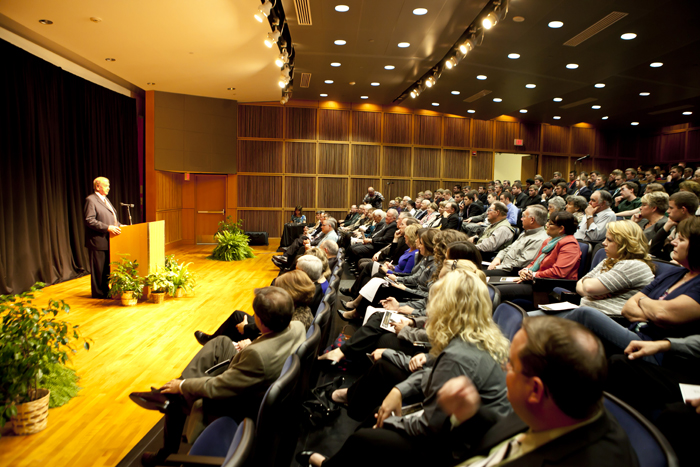