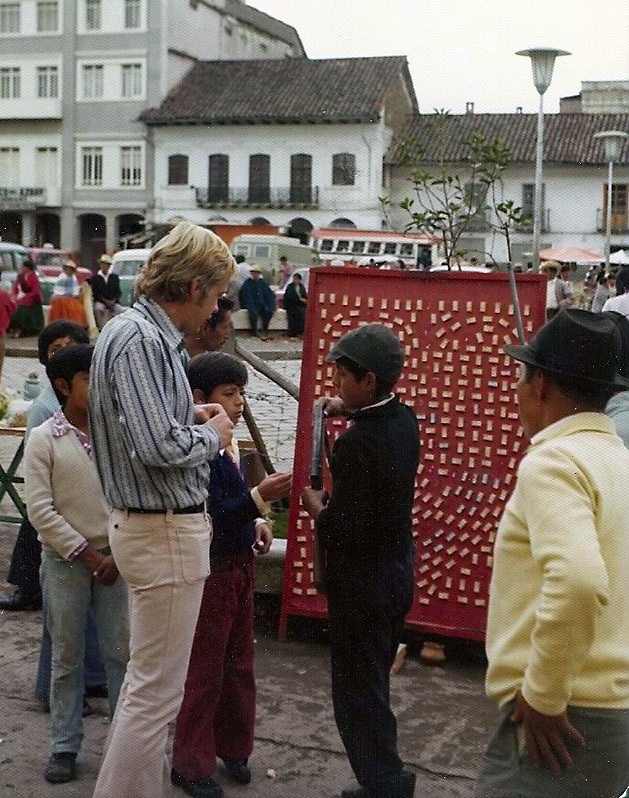 While on a visit to Cuenca in the Southern Andes of Ecuador, Jamtgaard was visits with some boys at the market.

Eight kilobytes. It’s about the size of the Google icon on its homepage. Minuscule by today’s computing standards, in 1973 it was the ram size Keith Jamtgaard had to teach a programming language to engineering students in Ecuador.

Jamtgaard, a research associate and professor in the Office of Social and Economic Data Analysis (OSEDA) at MU, grew up in South Dakota and said Peace Corps was an opportunity to broaden his horizons and learn about another culture by living within it.

“I found the friendliest people you could imagine,” Jamtgaard said.

In 1973, he left South Dakota for Guayaquil, Ecuador with the intention to build schools. When he arrived, he discovered several schools had recently been built in his city, so he searched for another avenue to direct his energy and skills.

He received some advice from Page Stegner, who was deputy director of Peace Corps in Ecuador at the time and son of award-winning author, Wallace Stegner. Page Stegner knew of a computer center at the Politechnic University of the Coast (ESPOL) that needed a teacher. An IBM employee who was scheduled to teach there backed out four days before classes started. Jamtgaard stepped in.

“It was a perfect fit,” Jamtgaard said. The computer lab in Guayaquil had a computer that was basically the same model he had worked on in the lab while studying sociology and math at Augustana College in Sioux Falls, S.D. The computer itself was the size of a big, wooden office desk but it had only 8k of magnetic core-memory coiled in little metal donuts. Its data disc would fill a large pizza pan.

Jamtgaard expanded the library of programs and the resource base for their computer. He also installed a sort routine, which the students used to digitize their library inventory.

While he was learning another language to assimilate into the culture, he was also teaching one. He taught Fortran, a scientific computing language developed by IBM in the 1950s. It’s considered the language of engineering. Before Jamtgaard arrived, students penned Fortran codes on paper. Jamtgaard instructed the students to actually run their programs on the computer and turn in the results.

“It was a breakthrough for the students; it became a tool that they used rather than just a tool they learned about,” Jamtgaard said. 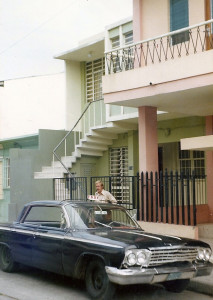 Jamtgaard negotiates a fare with a taxi driver outside the small downstairs apartment that he shared with another Peace Corps volunteer in Guayaquil.

He acquired a program to do survey data on the computer and collaborated with another Peace Corps Volunteer to help indigenous people get documentation for land ownership in the Amazon. His students did the survey work for the project.

“It opened their horizons to the kinds of resources they could look for,” Jamtgaard said.  The group created nutrition surveys to determine barriers to increasing protein in their diets, a nutritional issue throughout much of the region.

“I really valued the language and culture and after I came back to U.S. and I wanted more,” Jamtgaard recalled. He came to MU and wound up in rural sociology where he worked with Mike Nolan, former director of the Division of Applied Social Sciences (DASS).

Jamtgaard was in the right place at the right time. Since the early 1970s, Nolan had traveled to several countries in Africa, Southeast Asia and South America as part of the University’s involvement with USAID (United States Agency for International Development) projects to alleviate hunger and poverty.

When Jamtgaard started his graduate work at MU in 1979, a program was established in Peru. He went there to work on small ruminant livestock improvement projects. He also met his wife, Kety Bustamante there.

After they married in Peru, they returned to MU. While Jamtgaard finished his PhD in rural sociology, Bustamante earned a master’s degree in animal science specializing in swine. She now works for Farmland Foods to market Missouri meats internationally.

Crossing Cultures Abroad and at Home

While Jamtgaard didn’t meet his wife in the Peace Corps, he considers their fortuitous meeting indirect Peace Corps love.

“The cultural awareness and experience of becoming part of a different culture has given me a better understanding and appreciation for cultural differences that exist here in our own society,” Jamtgaard said. “There’s a Hispanic migration going on and I have some insights into what that’s like.”

Jamtgaard is able to connect easily with Hispanic parents to discuss potential programs and access what their children were experiencing at school because he speaks Spanish, understands and respects other cultures and knows what it’s like to cross cultures.

An example of the type of analyses Jamtgaard and his colleagues create at OSEDA.

At OSEDA, he puts data to work to inform public school policy and improve Missouri’s public schools. “We look at how to best enable public school districts to serve those less fortunate, whether that’s due to income, language barriers or any combination of factors,” Jamtgaard said.

He analyzes educational indicators through statistics and surveys to determine the factors that have the most leverage to improve student achievement.

“There’s a lot of attention on public education quality,” he said. “We frame the discussion with scientific data so policy makers, educators and parents can make informed decisions.”