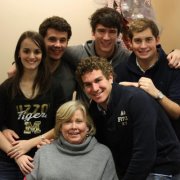 Stevens quickly found herself corresponding heavily via email with the five exchange students who soon arrived from Toulouse, France. Eventually, all of those emails developed into a close friendship.

“In a lot of ways I became their American mom while they were here,” Stevens said. She has kept in touch via email and Skype with the students, and left last week to visit them for 12 days.

CAFNR currently has an exchange program with Purpan, an agricultural institution in Toulouse, France. The Purpan students study at CAFNR during the fall, while CAFNR sends students to Toulouse in the summer. CAFNR students learn about French culture and agriculture during their studies. More information about the program can be found here: http://cafnr.missouri.edu/study-abroad/france/france-summer.php

Stevens will see all five former exchange students while in France for her 12-day trip. Of those students, three are still students at Purpan and another is interning in Toulouse. Stevens also will fly up to Paris for a few days where she will explore the city with the fifth student, who is currently interning there.

“I’m most excited to see them again,” Stevens said. “While they were here I saw how much they love France. I’m excited to see France through their eyes rather than as a tourist, and to see all the places that are important to them.”

In addition, Stevens said she expects the students to put their French cooking expertise to use during her visit.

“I will indulge their skills!” she said.

CAFNR offers study abroad programs in more than a dozen countries around the globe. Learn more at http://cafnr.missouri.edu/study-abroad/