A soy-based chicken substitute developed by Fu-Hung Hsieh, a professor of biological engineering at the College of Agriculture, Food and Natural Resources, University of Missouri, will soon be manufactured just a few miles from where it was developed.

Savage River Farms, a Maryland-based company that specializes in healthy food products, announced it will open a 16,000-sq.-ft. production facility in northeast Columbia that will go online this fall.  It will employ 60 people and represents a $5 million investment by the company. 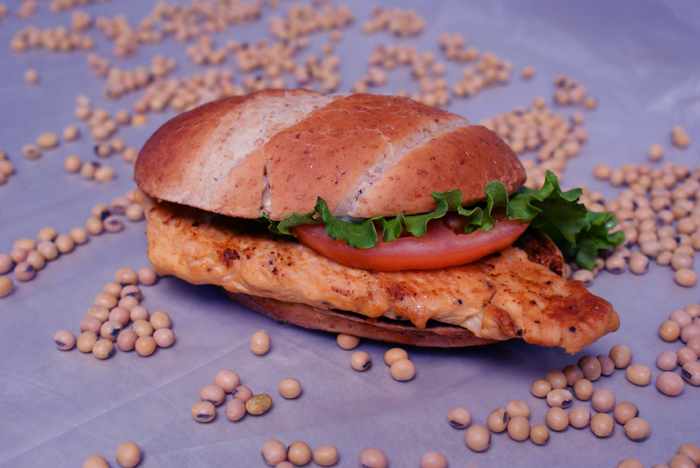 Founder Ethan Brown licensed the technology from MU in 2009.  The company has financial backing from The Obvious Corporation, which includes Twitter co-founders as owners, and the venture capitalist firm Kleiner Perkins Caufield & Byers.

MU’s licensing agreement stipulated that Savage River Farms must establish a financial presence in Missouri within five years, a new tactic for the university and a trend nationwide, said Rob Duncan, MU vice chancellor for research. 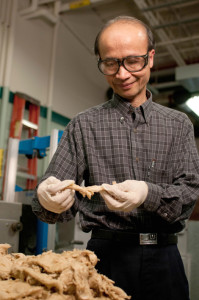 Fu-Hung Hsieh, a professor of biological engineering at the College of Agriculture, Food and Natural Resources.

Hsieh’s product not only replicates the taste of chicken, which is fairly easy to do, but mimics its fibrous texture and appearance, which is difficult. Hsieh and Research Specialist Harold Huff have spent more than 20 years researching the product, which uses heat and an extruder to convert powdered soy into a substance that tastes and feels like chicken breast meat.

The product will be called Chicken-free Strips and will be marketed under the Beyond Meat brand, said Brown. He said the meat substitute is so similar to an Oscar Mayer chicken strip that it is difficult to tell the difference between the two.

The strips have been test marketed in Northern California for more than a year.  The product is now being introduced to the northwestern states.  Midwest sales will begin when the Columbia production facility goes into operation.  Nationwide distribution will being in 2013.

Hsieh’s creation has been garnering national attention.  It has been featured in Time Magazine, the New York Times, NPR and ABC News.

Tastes Good and Is Good For You

Hsieh’s research is directed at making soy protein into a consumer-acceptable product that can be eaten by vegetarians or people wanting the heart health benefits of a soy diet.

Meat alternatives are becoming an increasingly big part of the world’s diet. The Soyfoods Association of America says such meat substitutes are purchased by vegetarians, chefs wanting faster preparation time, people with food allergies and shoppers looking for a cheap source of high quality protein.

Powdered soy protein is inexpensive, slow to spoil and can be easily transported – making it suitable for use in poor countries where animal protein is rare.