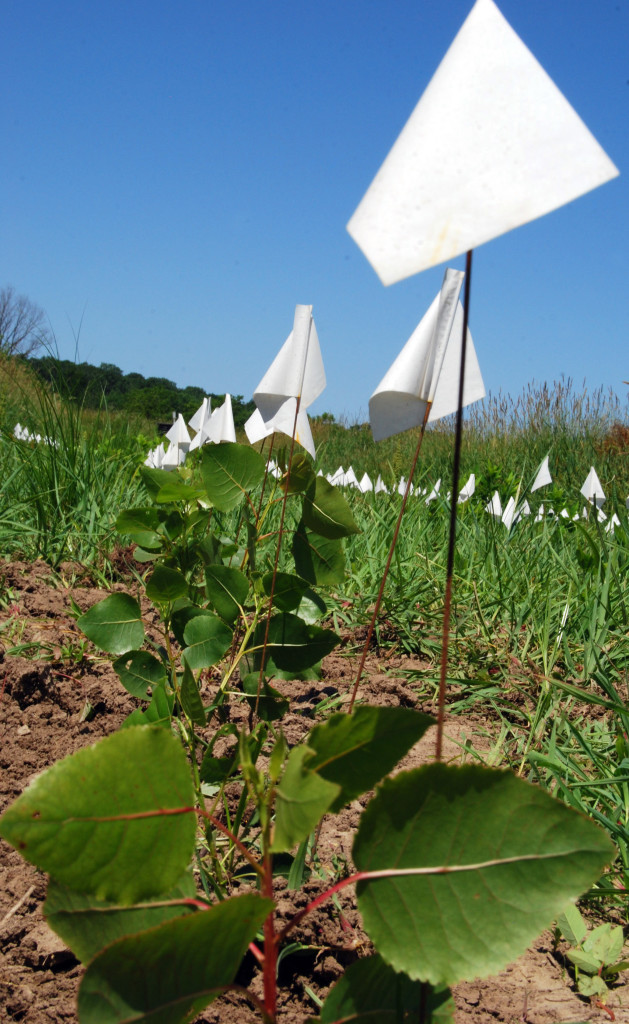 Like all babies, they’re cute and full of promise.  But these young shoots are in for some rough tests.  They’ve already been planted in marginal soil and will be routinely flooded and stressed.  In the end, they’ll be ground up and converted into pellets and then into liquid fuel.

Several varieties of switch-grass, sorghum and various trees have recently been planted at an experimental farm at the College of Agriculture, Food and Natural Resources  as part of a five-year project to develop the second-generation of liquid biofuels. The plan, that spans several research institutions here and overseas, is directed at creating a comprehensive field-to-fuel tank system that will reduce America’s dependence on foreign petroleum.

From Field to Fuel Tank

The project is a part of a $125 million U.S.-India Joint Clean Energy Research and Development Center grant, funded by the U.S. Department of Energy.  Three U.S. institutions – the National Renewable Energy Laboratory, the University of Florida and the Lawrence Berkley National Laboratory – will each partner with Indian research facilities and other U.S. researchers to leverage individual expertise and resources to investigate new technologies in solar power, efficient buildings and liquid biofuel.

The Mizzou Center for Agroforestry has a $5.4 million part of the University of Florida’s $21 million grant to develop a second generation cellulosic biofuel.

Agroforestry’s mission is to discover which potential biofuel plants grow best in the marginal lands, particularly along the Missouri and Mississippi rivers.  Use of marginal land is critical as one goal of the project is not to displace acreage needed for food crops. 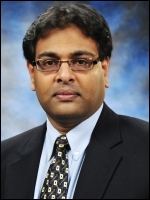 Shibu Jose.
Shibu Jose, the H.E. Garrett Endowed Professor and Director of The Center for Agroforestry, estimates there are more than 100 million acres of such marginal lands – either prone to flooding or erosion, or having poor soil – in the Mississippi/Missouri River floodplain alone.  Jose, who will direct MU’s part of the grant, thinks that if just ten percent of these lands are cultivated with biofuel crops, about eight billion gallons of advanced biofuels can be produced annually – more than one-third the Congressional goal set for the year 2022.

The Center for Agroforestry has been investigating for decades the benefits of tree planting in marginal lands.  Previous research proved trees provide wildlife habitat, hold the soil in place during floods, filter nitrogen fertilizer used in farming before it gets to waterways and transfer airborne CO2 into the soil.  They can also be a renewable crop for farmers who can’t grow anything else on the land. 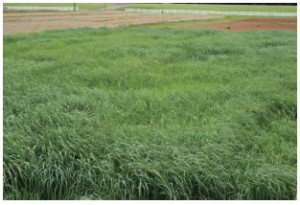 Jose and his colleagues will be testing multiple varieties of switch-grass, biomass sorghum, willows and cottonwoods.

Switch-grass is a promising biofuel feedstock because it is a perennial plant that requires little fertilization and can be grown in almost all of the contiguous states.  Switch-grass can be used to produce liquid fuel or dry pellets that can be burned with coal in electricity generation.

Sorghum, another potential source of liquid biofuel, is well known for its drought tolerance, meaning it can provide a steady stream of raw product even in prolonged dry weather.  Its exact tolerance to flooding is less known.  Like switch-grass, sorghum can be harvested every year with minimal fertilizer application.

Sweet sorghum is a promising bio energy source as it takes sunlight and converts it directly into sugars, eliminating the costly process of converting plant mass to starch and then to sugar.  Sweet sorghum can be converted directly into ethanol or other advanced biofuels. 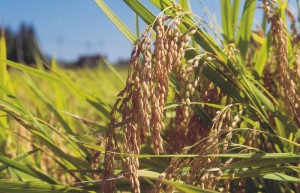 Cottonwoods and willows are promising as they can produce a lot of cellulosic matter quickly – a black cottonwood can grow to 12 feet and mature in just four years.

One of the trials will include testing 15 promising switch-grasses and 15 promising sorghum cultivars, as well as the trees, at CAFNR’s Horticulture and Agroforestry Research Center (HARC), located at New Franklin, Mo. HARC has one of the few flood tolerance labs in the world.

Here, the plants will be sown in a number of soil types representative of marginal lands from Nebraska to Louisiana.  The goal is to determine which plants can provide the biggest bang for the buck if extensively cultivated.  Depending on the research results, the winner may be one plant used over a wide area, or several plants customized for individual regions.

The plants will also be subjected to controlled flooding while a control population in the same soil get only rainwater.  This test will show which varieties of the plants are best suited for planting in marginal lands where frequent flooding occurs.

A similar test completed in 2009 at HARC confirmed that certain cottonwoods could withstand potential Missouri floods and be an economically viable crop that could be grown in flood prone areas.

Jose and his team will share their data with the University of Florida and collaborating institutions in India.  A side result will also allow Jose to estimate how much economic benefit a land owner can gain from planting biofuel plants on marginal land.

A Partnership of Experts

UF’s part of the grant will examine the best way to process those plants into liquid fuels – from bio-gasoline to bio-diesel.  They’ll partner with the Virginia Tech University who will calculate the environmental sustainability of the best choices. UF has had an operational ethanol pilot plant in operation since 2008.

UF and MU will both be working with Show-Me Energy, a unique bio-fuel co-op in Centerview, Mo. Show-Me will help evaluate which raw material is most easily converted into easier-to-transport dry pellets – the in-between process of linking trees and grasses to liquid fuel.

This little appreciated part of biofuel production is critical to making biofuel economically feasible.  Transporting large volumes of raw plant product can consume more energy that can be derived from the material.  Show-Me Energy is a prototype of a regional biomass conversion plant.  Here, the massive amounts of raw product is transported a short distance to one of the small but numerous and strategically placed conversion facilities.  These operations grind, process and squeeze the cellulose into energy dense pellets.  These pellets can then be economically transported to other facilities to be converted in biofuel or to electricity at powerplants where the pellets are mixed with coal.

The $125 million U.S. project will take about five years to complete.  The end result, it is hoped, will be a comprehensive and specific plan for large-scale cultivation of bio-crops and their processing into biofuel. 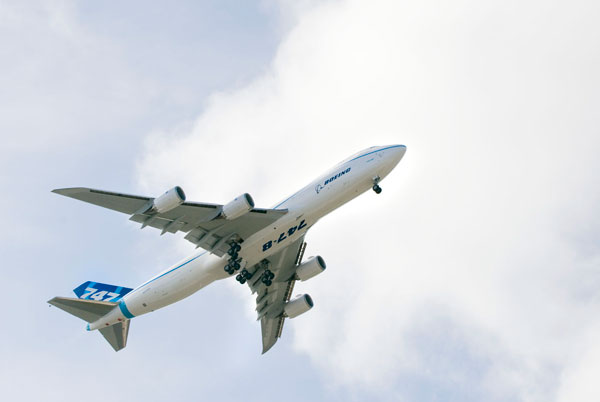 Boeing flew a 747 airliner across the Atlantic using just plant-based biofuels for all four of its engines. Photo courtesy Boeing Commercial Airplane Company.

Anyone who has read the news knows about the volatility in the gasoline market.  While the recent boost in gasoline prices have underscored the need for alternatively-sourced gasoline, it may not be the most critical need for alternative liquid fuels.  The U.S. military, airliner manufacturers, cargo carriers and airlines have all announced major initiatives this year to dramatically boost biofuel in aviation.

While electric cars may someday be common, that technology won’t fly. No electric-based engine produces enough energy to boost an airliner into the sky and keep it there. Hybrids, solar or even rocket fuel aren’t practical, either.  Until an anti-gravity device is perfected, air transport has one possible fuel.

Any disruption in jet fuel availability causes ticket prices to skyrocket or airplanes sit on the ground.  News reports that an Israeli or U.S. attack on nuclear processing facilities in Iran may trigger retaliation on tankers traversing the Straight of Hormuz – through which 20 percent of the world’s oil moves – has executives in the slim-profit airlines biting their nails and losing sleep.

Plant-based butanol is a promising biofuel for airplanes. In piston engines, butanol at 85 percent strength can be used without change to the engine, unlike 85 percent ethanol.  Butanol contains more energy per volume than ethanol – almost as much as gasoline – allowing a vehicle using butanol to have performance characteristics comparable to one using gasoline.  Butanol can also be made into Jet-A, diesel fuel’s airborne cousin, with equivalent energy and operational characteristics.  Bio-Jet A also produces fewer emissions. 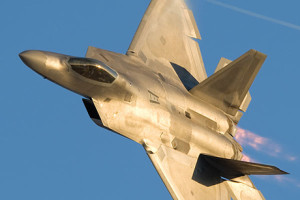 In March, the Naval Air Warfare Center Weapons Division in California announced a project to produce a batch of experimental bio-jet fuel based on bio-butanol. In this process, butanol produced from non-food feedstock, like woody biomass, is processed into butane which is then processed into jet fuel. The fuel will be tested by the U.S. Naval Air Warfare Center with the goal of military certification.

The development of cost-effective and sustainable sources of fuel for military use is a high priority for the Navy, which is aiming to cut the use of foreign-based fossil fuels in half by 2020. This summer, the Navy is planning on using 450,000 gallons of biofuel for its Rim of the Pacific maritime exercise – part of the Great Green Fleet demonstration, a carrier strike group composed of nuclear ships, hybrid electric ships running bio-fuels and aircraft flying on biofuels. Additionally, by 2016 the Great Green Fleet will be fully deployed using 50/50 blends of biofuels for ships and aircraft.

KLM Royal Dutch Airlines is already using bio-petroleum blend jet fuel on its Amsterdam-to-Paris run.  Recent European Union regulations cap aviation greenhouse-gas emissions with significant penalties for those who pollute too much. In 2011, Boeing made a trans-Atlantic flight fueled by a hydro-processed oil from camelina. This flight was the first in which all four engines of an airliner were powered by biofuel.

FedEx CEO Fred Smith said in March that aviation biofuels are a priority for the company, and should be for the United States to get the country weaned off politically-volatile petroleum. He said the technology is already proven so it’s just a matter of surmounting the price barrier.  FedEx wants a third of its fuel to come from bio sources by 2030.