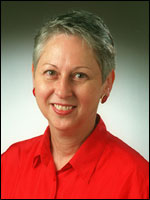 Judith Stallmann.
Judith Stallmann, professor of agricultural and applied economics, was a guest expert in a League of Women Voters television discussion on an effort in Boone County, Mo. to use an Enhanced Economic Zone to spur area job development.

The EEZ is the topic of a heated debate in the county.  The plan uses tax incentives as a way to attract new factories.  Boone County has lost 1,920 manufacturing jobs since 2004, according to a report Regional Economic Development Inc. delivered to the Columbia City Council on Jan. 17.

Opponents believe the EEZ will negatively impact the poor and take taxes away from services like schools and transportation.

Stallmann conducts research in rural development and public finance in CAFNR’s Division of Agriculture and Applied Economics and the Truman School of Public Affairs.  The discussion appeared on the Columbia Access Television channel.

After a two-hour public hearing in May, the Columbia City Council unanimously voted to pass an ordinance that will re-establish the Enhanced Enterprise Zone Board with modifications to the zone.