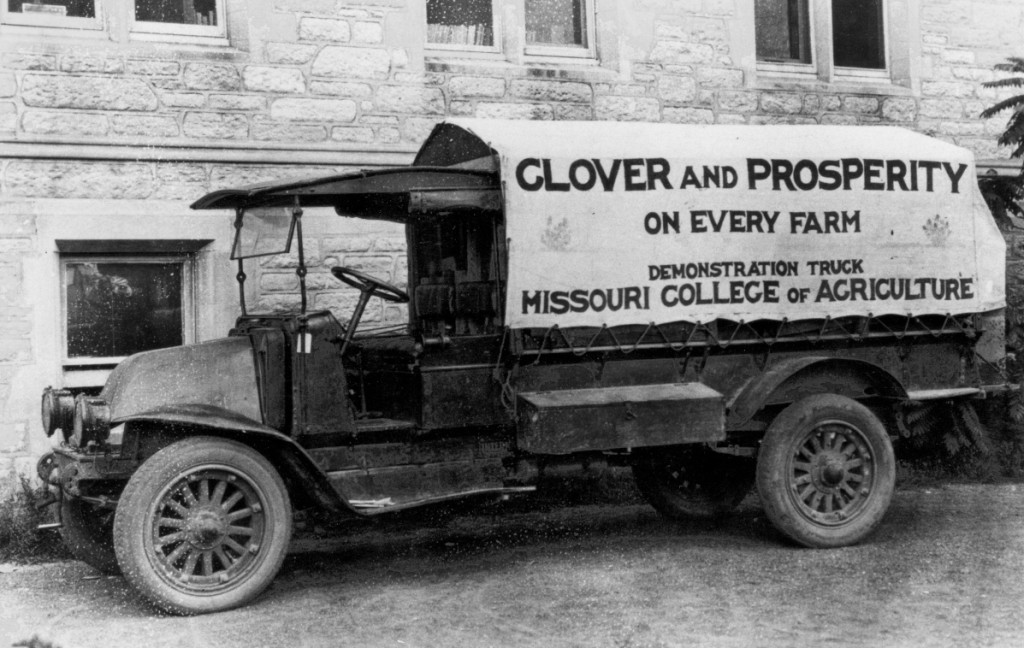 Mike Vangel, father of Tracie Vangel, administrative assistant in CAFNR’s Division of Applied Social Sciences, found this old photo of a truck once owned by the Missouri College of Agriculture and promoting something called the Clover and Prosperity project.

The truck is a Mack AC “Bulldog,” a vehicle was used extensively by the Allies in World War I.

The Clover and Prosperity program, painted on the side of the vehicle, isn’t well known today.  In a front page story in the Jan. 1931 Cape Girardeau Southeast Missourian newspaper, Ide P. Trotter, soils and crops specialist at the Missouri College of Agriculture in Columbia, wrote that the program was in response to soil erosion problem in Missouri.  More than 80 percent of cultivated land in the state was being lost, he said.

Trotter said that such erosion was easily controlled by planting certain cover crops. “Sloping land should be kept in grass permanently,” he wrote. “Rotation of crops where the land is kept in small grain and hay at least half of the time is one of the most practical methods for controlling erosion. Wherever possible, use sod-forming legumes instead of cultivated legumes. Use cover crops to protect the soil during the winter.”

In that same newspaper, a story described a series of county Clover and Prosperity conferences. The report said the effort began in 1922. It stressed “better soil management, more legumes, and the attendant improvement in soil fertility and feeding value of home grown forage.”

The story also said that farmers, aided by the College of Agriculture, were aggressively adopting the program’s policies. The newspaper reported conferences in 98 of the state’s 114 counties.

C. Jerry Nelson, Division of Plant Sciences professor emeritus, remembered hearing about the program in his early days at Mizzou. “There was emphasis on six legume species and most of the work was on sweet clover, but several other legumes were discussed including annuals,” he said. “Korea Lespedeza was introduced in the early 1930s, which became the dominant annual. Sweet clover is not a sod former, but I think they used the word ‘clover’ loosely as something synonymous with legumes. Perhaps the sod was formed by the grasses in the mixtures that were stimulated. Legumes included were soybean, vetches, alfalfa, red clover and I suspect alsike clover and white clover, although there is little mention of the latter two in the programs I have heard about.”

The AC was the first Mack truck and introduced in 1916.  It had a chain and sprocket drive. During the Great War, Mack delivered approximately 3,000 ACs with three to seven tons of carrying capacity to the United States and its allies. The AC earned the nickname “Bulldog” from British soldiers. The truck’s unique blunt-nosed design and its tenacious ability to get through anything reminded British troops of their own bulldogs. When they faced difficult terrain or a situation that called for the most reliable trucks, it is said that British soldiers would call out, “Aye, send in the Mack Bulldogs!”

The truck’s radiator was mounted behind the engine, a Mack innovation. The rig got its power from a massive 471-cu.in., four-cylinder engine rated at 45-hp. The engine’s architecture featured a cast-aluminum crankcase. The transmission was a three-speed manual. The truck’s maximum speed was regulated by the diameter of its chain-drive sprocket.  Only the rear axle had expanding-band mechanical brakes, the Mack’s only stopping power.

After the war, the AC, manufactured through 1938, helped start the American trucking industry. The AC also became the standard of the construction industry, as well as other applications that required a high performance, rugged vehicle. Construction of skyscrapers, subways and dams as well as logging, mining and heavy general hauling was done with AC dump trucks. Watch TV reruns of The Untouchables and you’ll see Bulldogs hauling bootleg whiskey, not clover.

How Mizzou Got Ag: the Morrill Act Gets Things Started

Change Agent: The Third Dean Begins to Fix the Place

OTHER STORIES ABOUT CAFNR HISTORY

Cows on the Lawn: Eckles Hall Was a Big Boost to Missouri Dairy

A Concrete Pedigree: the Ag Building’s Connection to a Political Boss

Sam’s Slab Lab: the Unique Architecture of the Ag Building

From the Soil, Medicine

A Century of CAFNR in Photos

A Whale of a Journey, MU’s Whale Jaw

The Bidding War for CAFNR