The award, which is worth at least $5.5 million over 10 years, will allow him to continue his research without re-applying for funding. Hazelbauer joins only 11 other MU researchers who have received the MERIT award, including his wife, Linda Randall, who is also a biochemistry professor. 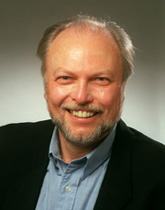 Hazelbauer’s research concerns the bacterium Escherichia coli (E. coli), which has a rudimentary molecular “memory” that allows it to swim toward the richest sources of food.  Hazelbauer’s continuing discoveries about how bacteria do this could shed light on human and animal sensory, memory and response systems.

“My doctoral work was with Julius Adler, the first scientist to study the molecules behind bacterial behavior,” Hazelbauer said.  “His work led to the discovery that bacteria have a molecular ‘memory’ system that allows them to ‘remember’ the past, compare it to the present and thus move toward the area that is most favorable. When I began my work as a researcher in the late 1960s, studying bacterial behavior was a curiosity and its significance unclear. Now, decades later, the research done by my group and others has grown into a body of knowledge about the fundamental processes used by all living things to recognize, remember and respond to changes in their environments.”

MERIT awards are intended to foster creativity and allow researchers to take more time to develop new techniques. The awards are given only to scientists who have proven themselves by succeeding in at least 10 years of previous NIGMS-funded research and who seem likely to continue making valuable contributions to their field.

MERIT Awards are given to no more than five percent of NIH-funded investigators. One cannot apply for these awards – nominations are by NIH Program Officers. According to the NIH website, there have been 11 previous MERIT Awards to MU faculty, including two others in Biochemistry, Mike Roberts, Curator’s Professor of Molecular biochemistry, and Linda Randall.

Hazelbauer is a Fellow with the American Association for the Advancement of Science and American Academy of Microbiology. He has been recognized with a Sloan Research Award in Neurosciences, a McKnight Neuroscience Development Award and an American Cancer Society Faculty Research Award.