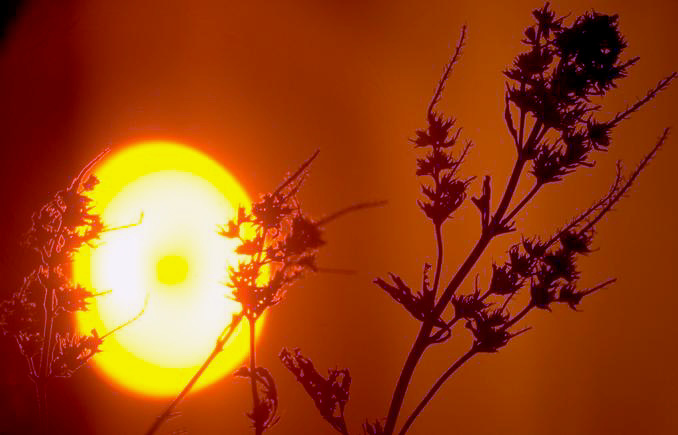 Recent weeks of scorching summer heat have triggered endless talk about how hot it is.  But what’s causing the 100 degree-plus temperatures and why are they lasting so long?

It’s a massive heat dome that has grown over the central third of the nation, said Tony Lupo, chair of the Department of Soil, Environmental and Atmospheric Science at the College of Agriculture, Food and Natural Resources, University of Missouri.

A heat dome is a kind of perfect storm of sizzling summer weather that starts with cloudless skies and the high angle of the sun in the summer, heating up the ground below which heats the atmosphere.  When a high pressure system develops in the upper atmosphere, warmer air below it sinks.  This reinforces the hot air at the surface. 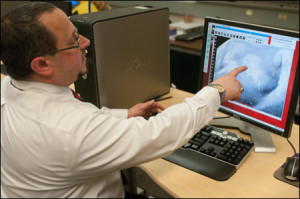 Tony Lupo.
First, the effects have been magnified by the drought afflicting the Plains and the South.  With the soil so dry, less solar energy is used in evaporating water and more is devoted to making humans feel as if they are under a heat lamp.

Second, this heat dome is a particularly massive one, Lupo said, covering more than one million square miles. A heat dome this large influences other aspects of the atmosphere.  This dome, which has parked itself over the nation’s Midwest, is pushing the jet stream and its dry and cool air to the north into Canada.

Lastly, the heat dome is staying in one place because of a phenomenon called atmospheric blocking – Lupo’s main field of research.  Generally, he said, a cold front or a low-pressure storm system will move in from the west and push a heat dome into the Atlantic.  This current heat dome has been so persistent because two large-scale weather patterns – one over the Atlantic and another over Asia – became nearly stationary.  Like cars backing up on a freeway, following high and low pressure systems have ground to a halt, leaving a hot and persistent weather pattern over the Midwest. 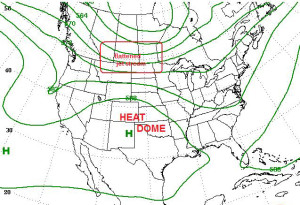 A heat dome directs cooler air from the jet strema into Canada. Courtesy NOAA.
Generally, a longer blocking event lasts up to 10 days.  This event lived from June 19 until June 28.

The current heat wave has been a scorcher with hundreds of records being broken, and it is approaching the records of the two worst years in recent times, Lupo said.  July 1980 saw 14 consecutive days of 100 degree temperatures and 1936 had 16 consecutive days of triple-digit highs.

He has written 65 peer-reviewed publications and invited book chapters on subjects dealing with Atlantic hurricane activity, the prediction of temperatures in the Mississippi Valley and the influence of a small city on local surface temperatures and forecasts.