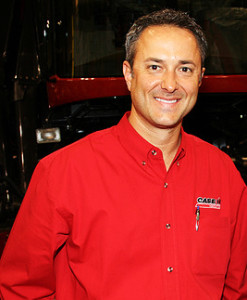 Trent Haggard is coming home to the Bootheel. On July 16, he’ll report to work as the new director of the T.E. “Jake” Fisher Delta Research Center in Portageville, Mo.

Haggard grew up on his family’s farm in Pemiscot County, Mo., where he was involved in all aspects of the 3,200-acre operation growing core Bootheel crops: rice, cotton, soybeans, wheat, and corn.

He spent the last 18 years working for Case IH, most recently as the U.S. sales and marketing manager for cotton harvesting.

Haggard’s career has taken him across the U.S., from the heartland in Memphis, west to Denver, south to Baton Rouge and most recently in Racine, Wis. His diverse experiences have afforded him the opportunity to connect with farmers in several states. “I loved being involved selling tangible products engineered and designed based on producer feedback and to provide them with tools that help them be more productive in their agriculture operations,” Haggard said.

The opportunity to come home in this role is an amalgamation of his passions, Haggard said. “I grew up at the DC (Delta Center) and my father and grandfather were very serious about the need for the Center and how it can benefit agriculture here and around the world,” Haggard said. “It’s time for me to pick up that baton.”

The Center is part of a network of research centers across Missouri, extending the College of Agriculture Food and Natural Resources’ (CAFNR) research to nearly 14,000 acres to meet the regional research and demonstration needs of agricultural producers and natural resource managers.

Haggard has traveled back for Field Days at the Center almost every year for the last 10 years. The annual Field Day event draws hundreds from the region to learn about the latest research from the 1,024-acre center.  The Center’s mission is to enhance the productivity of agricultural products from the unique climate and soil of southeastern Missouri, one of the most important farm areas of the state and where one-third of Missouri agricultural sales – soybeans, rice, cotton, corn, milo, wheat and vegetables –originate.

Haggard’s MU connections are deeply rooted. Eight MU graduates are involved with his family’s farm. When Haggard considered where to attend college his mom encouraged him to be open-minded and explore several options, but his decision had already been made.  “I was sold from 5-years-old when I attended my first Mizzou football game,” he said. Later he visited older cousins who attended MU and he got to learn more about the atmosphere and academic programs through their experiences.

Haggard earned his degree in agriculture at MU, and during his studies he took advantage of the diverse opportunities CAFNR offers taking courses in food science, hotel and restaurant management and working at (the now mobile) Buck’s Ice Cream.

He also interned at both the U.S. Senate and House as the 1990 Farm Bill was passed. “Seeing the true mechanics of what it takes to pass legislation was a great learning experience,” Haggard said.

He studied abroad in Costa Rica as part of the pioneering group of CAFNR students at EARTH (Escuela de Agricultura de la Región Tropical Húmeda) University campus. “It was a phenomenal opportunity to see the differences and similarities of how agriculture works in other parts of the world,” he said.

Whether he’s communicating across cultures or across regions of the U.S., Haggard works to listen intently to find solutions for producers. “It’s always informative to hear those challenges and rewarding to offer solutions that improve their operations, quality of life, resource management and increase profits,” Haggard said.

He’s looking forward to building on the tradition of excellence and innovation at the Fisher Delta Research Center, a resource his family turned for guidance when they encountered challenges in the field.

“There’s been a phenomenal amount of great accomplishments under Jake in the last 50 years,” Haggard said.  “We’ll maintain and build on that solid foundation and work with a board that is robust, and dedicated to the Center’s success.”

The year 2012 marks the 150th anniversary of the Morrill Act, the legislation signed by President Lincoln that established the land grant university systems. “The T.E. ‘Jake’ Fisher Delta Research Center is an essential part of the land grant system in the state of Missouri,” said Marc Linit, associate dean for research and extension for CAFNR.  “It is fitting, therefore, that this year also will see a change in the leadership of the center.  Trent Haggard, the incoming director, has deep Bootheel roots that have been nourished by exposure to national and international experiences in agriculture.  I am very excited that we could hire an individual of Trent’s experience and stature to lead the Delta Center as it continues to support local and regional agricultural needs within the framework of global agribusiness.”