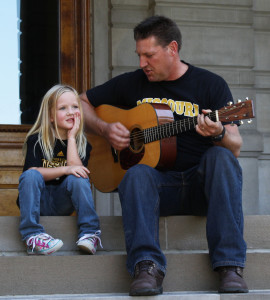 Although there are pictures of Blakemore playing his toy guitar on-stage with his father’s band at the age of five, he officially started playing guitar at 14 and he hasn’t stopped since.

“My first public performance as a singer-songwriter was July 29, 1995, at my own wedding,” Blakemore said. “I was much more nervous about singing in front of people than I was about getting married.”

It was then that he performed the only love song he has even written. Most of Blakemore’s songs tell stories that are grounded by true experiences. His songs are either sad, funny or both.

“At songwriting workshops they always tell you to write songs that can be marketed to large groups of people. I do just the opposite,” he said.

Growing up Blakemore spent an increasing amount of time working on the tractor, where he wrote poetry and songs to pass the time. He carried a notebook to write down any interesting lyrics and hooks.

“At the end of the day, I would sit outside on the porch swing and put the lyrics to guitar music,” he said. “I usually make lots of changes to my songs before I perform them for the first time. I am a very critical songwriter and I have numerous songs that are years old that I just cannot find the right lyrics to finish.”

Unlike most songwriters who take a guitar and strum chords and begin adding lyrics, Blakemore almost completely writes the song in his head and then adds the music to it after it is complete. 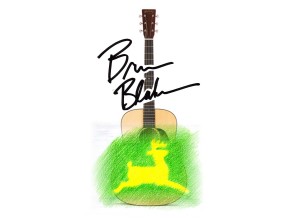 “During the last 10 years, I have focused on writing and performing songs to rural people and ‘farm’ groups at banquets, conferences and festivals,” Blakemore said. “I believe my degree in Agriculture from Mizzou has made me more credible as speaker and performer. My college education helps me to relate to my audience.”

Blakemore frequently performs with Brad Carter, a musician and music teacher at Dadeville High School. Carter has played with professional musicians in music shows and in Nashville, Tenn. The two first performed on stage together in 1998 at a “Bucks Seed House” customer appreciation BBQ.

“I brought one of my students who played drums and met Brad, who played piano,” Blakemore said. “Later that fall, he played at my FFA barn warming and we have been playing together ever since.”

The two mostly play bluegrass as a duo with no band. Blakemore sings original songs and plays rhythm guitar while Carter plays lead and sings occasionally. The two perform together at various events.

Blakemore’s father was a member of the 1970s band “Blue Mountain Classics,” which was the opening act for major concerts in the Springfield area during the time. The band sounded similar to the “Statler Bros.” and at one point they performed in a concert with the Statlers. The band was formed in 1973 when Blakemore’s mother was pregnant with him.

“Every time the group would practice, she said I would kick like crazy in the womb,” he said. “As a young child, I was always around music and it had an effect on me.”

Local folk-singer Judy Domeny-Bowen has also influenced Blakemore. Domeny-Bowen is a successful musician who wrote an album of songs specifically for teachers and began performing at educational conferences and professional development meetings.

“She encouraged me to be specific with my music and begin targeting ‘farm’ audiences,” he said. “She has even helped me to find a few shows to play. Her method of finding a niche has worked well for me.”

Blakemore always dreamed of being a professional songwriter. 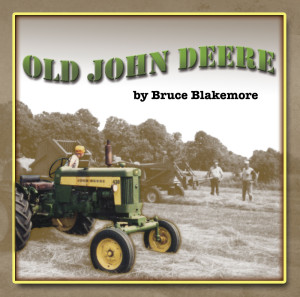 “When I turned 30 I began to go through a time of depression as I realized my dream would most likely not become reality,” he said. “Ironically, at this point, I met Judy Domeny, changed the focus of my music and began to have success as a songwriter. I may never have a professional artist record any of my music, but I love performing to people who appreciate my songs.”

Of all the songs Blakemore has ever written, two in particular stand out: “Old John Deere” and “Daddy to Dad.”

The first song was written in the summer of 1994 while raking hay. It is about a boy growing up on the seat of a John Deere tractor and the effects this has on his life.

“The first time I sang the song to my father, he felt really guilty about making me spend so much time in the field,” he said. “This song is now his favorite song as well.”

He wrote the second song in his daughter’s room when she was 2 years old.

“I remember thinking one day how sad it will be when she stops calling me ‘Daddy’ and starts calling me ‘Dad,’” he said. “My daughter is now 11 years old and she gets teary-eyed every time I perform the song.”

His students are often the first to hear his new material. On Fridays, Blakemore brings his guitar to school and jams with students during the school’s RTI (special class) time. Recently his students recorded a song with him and made an agriculture literacy video to accompany it. The video, titled “The Farmer’s Hands,” won the Agriculture Video Contest sponsored by Farm Bureau at the State FFA Convention. This video is available to view here on youtube.com.

Blakemore has many great college memories. Here is a short top 5:

5. Lambing watch at 4 a.m. at the University Sheep Farm.

4. A guest speaker in Global Animal Agriculture class who predicted what the world

would be like in 2002 (he was right in every prediction).

3. Two students passing out during the castration of pigs in animal science class (they

wanted to be veterinarians).

2. Having lunch with my agriculture education professors at The Heidelberg on our very last day of class our senior year.

1. Associate Professor Emeritus of Agricultural Education Dr. Richard Linhardt- He was the reason I received my American FFA Degree and helped me change my major to agricultural education from engineering during that summer day in July that changed my life.

“I dream of performing to a very large crowd someday before I die (just one song would be OK),” he said.