The soybean is just a humble legume wrapped in a funny pod.  Hold one in your hand and its distinctive markings seem to grin at you.

These beans are happy because they’re worth a bundle – more than $33 billion nationally in 2010 and almost $3 billion in Missouri alone.

Talk about American exports and soybeans roll right behind commercial aircraft in dollars.  In February, American soybean exporters sold three million metric tons of the stuff to China in the biggest deal of its kind ever, underscoring just how significant the crop is.

And Missouri is virtually Soybean Central.  It’s the state’s most important crop.  Most American soy-based companies and associations – Monsanto, the American Soybean Association and the United Soybean Board – call St. Louis home.

Supporting all of this financial activity are dozens of researchers and projects at the College of Agriculture, Food and Natural Resources (CAFNR) at the University of Missouri.  Here, research projects are underway to boost soybean yields and quality, make the product a better food and someday develop it into a viable diesel fuel to wean America off imported petroleum.

Here are a few examples of what’s going on. 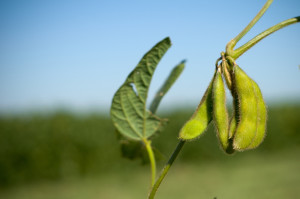 Soybeans in the pod.

The National Center for Soybean Biotechnology

CAFNR was selected by the U.S. Congress to host the National Center for Soybean Biotechnology (NCSB) based on its record of interdisciplinary research on soybean genetics, genomic and related sciences.   NCSB’s goal is to provide innovative molecular approaches to trigger soybean improvement.

Recently, NCSB has begun a fundamental project to sequence the DNA of 1,008 commercially important soybean varieties, said Henry Nguyen, director of the center.  The effort is designed to provide a dramatic
increase in genetic data.

There are about 45,000 genes in the soybean. Little is known about the function of most of them.  The ability to manipulate these genetics could lead to dramatic improvements in disease resistance, drought and flood tolerance, and extractable content.

The number of lines to be sequenced – 1,008 – was chosen because the numeral eight in Chinese denotes prosperity, stated Henry Nguyen, NCSB director. Soybeans originated in China. The very first sequencing of a single soybean line occurred only in 2008.

Soybean oil is the world’s most widely used edible oil.  Processed soybean oil has a reputation for being cardio-unfriendly due to a relatively high trans-fat content. 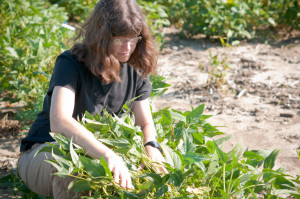 To cardiologists, there is no safe amount of trans-fat that a person can eat. The more trans-fat consumed, the greater the production of the bad cholesterol that damages the heart.

Trans-fat is created when liquid plant oils are engineered to a stable, non-perishable state through a process known as hydrogenation. Hydrogenated oil is used in most processed foods, including cookies, baked goods, shortenings, crackers, doughnuts, chips and French fries.

A MU research team has created a soybean variant that produces oil that does not have to be hydrogenated – adding no trans-fat while frying or baking.

The trick is to increase the level of heart-friendly oleic acid content in the soybean plant, said Kristin Bilyeu, a USDA molecular biologist and MU plant sciences adjunct assistant professor. She and J. Grover Shannon, professor of plant sciences, lead the research effort that bred the improved soybean variety. 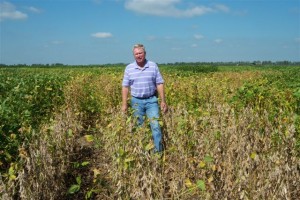 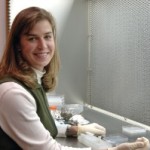 Each season, soybean cyst nematode (SCN) parasites destroy 128 million bushels of the product and cause $1.3 billion annually in soybean losses in the U.S.

CAFNR plant pathologist Melissa Mitchum (left) and colleagues at Iowa State University and North Carolina State University recently received a grant from the USDA’s National Institute of Food and Agriculture to continue their research on protecting soybeans from the parasite.

Mitchum’s research focuses on the biochemical interactions between SCNs and the soybean plants they eat.

Mitchum’s lab also studies how the nematodes affect the soybeans’ internal movement of auxin, a growth hormone. A study by researchers in Mitchum’s lab found that nematodes’ effector proteins commandeer the plant’s own auxin for use in producing feeding structures for the parasites. 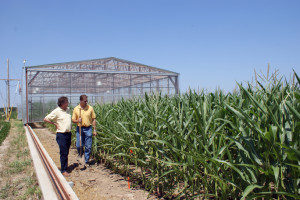 Drought and the Soybean

In agriculture, a dearth of rainfall can be devastating. Droughts are the leading cause of crop failure. Mizzou scientists hope to reduce the damage by determining which plant varieties can best withstand drought.

And the best way to do that is to create a drought on demand.  To do this, two drought simulators were recently built at the Bradford Research and Extension Center.  The simulators look like 50-by-100-foot greenhouses on railroad tracks. They move away from test plants when the weather is sunny and cover the plots when rain approaches. By varying the position of the greenhouse, researchers can allow a specified amount of rain to fall on the plants. Test plots of the same plants just outside the drought simulators provide a scientific control.

Fill ‘er Up With Soy, Please

Are soybeans the fuel of the future?  Maybe.  Missouri scientists have investigated the use of esterified soybean oil, called soy ester, and soy ester/diesel blends. In general, research findings indicate that it is feasible to use vegetable oil esters from a variety of sources as extender or replacement fuels for compression-ignition, internal-combustion engines.

A soybean-powered diesel truck is a common site on the MU campus.  The truck was used in over-the-road and typical farm activities to evaluate the effect of soy ester on engine wear when subjected to varying load/temperature conditions.

You come in contact with a certain legume every day and don’t know it. 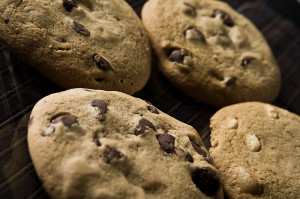 Soybeans are about 18 percent oil and 38 percent protein. When processed, a 60-pound bushel will yield about 11 pounds of oil and 47 pounds of meal. Because soybeans are high in protein, they are a major ingredient in livestock feed. Most soybeans are processed for their oil and protein for the animal feed industry. A smaller percentage is processed for human consumption and made into products including soy milk, soy flour, soy protein, tofu and many retail food products. Most French fries are cooked in hot soybean oil.

Soy has replaced petroleum in crayons, meaning your kid can eat all he wants.  Most newspapers and laserprinters print with soy ink, and your car seat cushion – not to mention your brake fluid – is probably soy based.  Soybeans are a promising biodiesel.

Soy glue?  Of course—it replaces older adhesives in wood building materials that use cancer-causing formaldehyde. Soy diapers?  Absolutely.  One company uses soy-based resin to manufacture its waterless urinals.  Soy-based health and beauty products include everything from hand lotion to soap. Soy is not as greasy as other products and helps protect your skin from the sun. Soy used to make shampoo and hair conditioner also provides nutrients for your hair.

You even kill bugs with soybeans.  Soyoil is used in bug sprays for orchards and trees. The sprays are better for the environment and can help kill weeds.  You can’t even drive to work without rolling over soy-based road materials called “soapstock.”  This material forms an environmentally safe coating that protects concrete roads and helps control dust on gravel roads.