America is not only a land of big waistlines, but also of big waste when it comes to food.

In the future, those table scraps could help power homes and businesses. 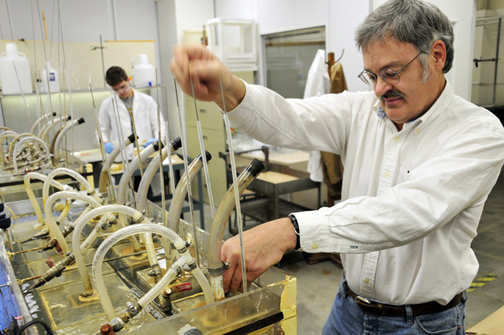 University of Missouri researchers want to get more from those leftovers through by a “recipe” for harvesting methane.

“Food waste, animal manures or anything highly degradable should not really be going into a landfill,” said David Brune, a professor of bioprocessing and bioenergy engineering with the University of Missouri College of Agriculture, Food and Natural Resources and MU Extension. “By digesting it, we’re recovering energy and are also using the nutrients in a more controlled and efficient way to prevent water pollution or groundwater pollution.”

More than 34 million tons of food waste was generated in 2010, more than any other material category except paper. While food waste accounts for almost 14 percent of trash, only a small amount of it is recycled, according to the Environmental Protection Agency. The rest —33 million tons— is thrown away, making food waste the single largest component reaching landfills and incinerators.

The basic concept of methane harvesting is simple: Put leftover organic material in an airtight container and draw off the methane that is produced when anaerobic bacteria break it down. 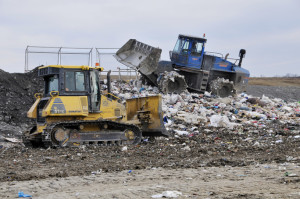 In the lab, food waste digesters look like complicated fish tanks. Tubes run in and out for harvesting methane and adding more food waste. The mixture smells like a sour mash and looks like a leftover food smoothie. Brune adds items like blue algae powder and sodium bicarbonate to get the right balance, increasing the amount of nitrogen in the mix so more methane can be produced.

It sounds simple, but complications arise when doing this on a large scale.

If the balance of food isn’t just right, the mixture turns into a putrid, vinegary substance or can break down far too quickly. The wrong mixture can also plug up a system, making the digester tank explode. Brune works out these kinks in the lab by testing several mixtures at a time, logging the gas production of each and problems that arise.

“These are living bacterial systems, so just like people they have to have the right mixture of food in their diet to be healthy and need the right mixture of nutrients to operate properly,” Brune said. “Half of these trials will fail, but we have to figure out the optimum conditions to keep the mixture from converting to vinegar and still produce high levels of methane gas.”

Controlling methane is important. The greenhouse gas traps 21 times the heat of an equal amount of carbon dioxide, according to the Environmental Protection Agency. Landfills are the third-largest human-made producer of the gas.

Cities like Columbia already take advantage of methane. It draws biogas from 51 wells in its landfill of mixed trash and organic material, generating enough electricity from the gas each year to power more than 1,500 homes.

“Operationally, it’s better to have some revenue from our landfill, and the Columbia water and light department also gets revenue when they put it on their grid,” said Cynthia Mitchell, landfill and recovery superintendent with Columbia’s public works department.

Nationwide, more than 550 projects in 46 states use low-tech methane wells to siphon the gas off landfills and burn it to generate electricity. This provides revenue and reduces migration of the heavy gas from landfills. The Missouri Department of Natural Resources regulates this problem because in high amounts the gas can be deadly to animals, plants and humans.

If food and other organic waste is separated out of trash, that waste can produce much more methane, thus much more electricity. Gas from mixed landfills is about 30-50 percent methane, but Brune said future digesters will separate the waste and produce gas that is up to 70 percent methane.

A Future in Trash

For Brune, this is the future of trash in the U.S.

“For places like California, we’re talking about 50,000- to 100,000-gallon digester tanks where food waste will come in very large trucks, be blended and ground into a puree and fed into digesters,” Brune said. “We’re seeing nationwide waste companies compete to contract with food stores, big-box stores and restaurants for readily available food waste because it’s valuable and not something that simply should be thrown away.”

California-based Kent BioEnergy funds this research, and plans to use what is learned in a system to recycle food waste from Los Angeles and San Diego.

“Every waste is a little different,” he said. “I’m trying to find the perfect combination of conditions and additions to make the recipe for a particular waste source, but I’m also trying to develop a general model to predict what you should do with any sample of waste. We’re not quite there yet, but I think we can achieve that in the future.”