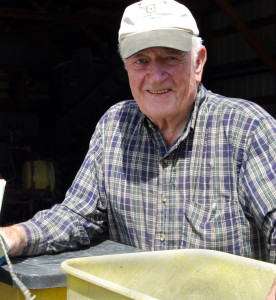 Bob Chapple has spent nearly his entire life helping Missouri farmers. At 80 years old, he isn’t slowing down from that dedication.

“If I have an idea I want to run it past Bob Chapple to get his reaction,” said Wayne Flanary, agronomy specialist in northwest Missouri for MU Extension. “He slows me down, makes me think and we have a dialogue to make decisions. If I was asked to name someone to look up to as a model extension agent it would be Bob Chapple,” he added.

Chapple grew up near Salisbury, Mo., where he was active in 4-H and raised sheep with his brothers and sisters. He knew at an early age he would be involved in agriculture.

He graduated from college with a degree in agricultural engineering, but received a commission from the Air Force at the same time. He bounced around to several bases in the U.S. where he leaned to fly fighter jets in the three years following the Korean War. His service complete, he grounded himself with MU Extension in Unionville, Mo., for a few years, then moved to northwest Missouri, where for decades he specialized in addressing agricultural engineering challenges, such as developing effective crop drying systems.

He helped found the research center that bears his name, along with several partners in 1988, including Donald Graves. No-till agriculture was foreign to most farmers in the area and those who had heard of it were skeptical. Research at the Center has proven for more than 20 years that no-till is viable, profitable, reduces erosion, reduces input costs and improves soil health and water infiltration rates.

Chapple is proud of that research and of the guidance he and others have provided to area farmers who have converted to no-till. “For folks who grew up when I did, we learned a field should look like a well-maintained garden; with no-till, people have to unlearn some of what they’ve learned to make it work,” Chapple said. He says producers making the switch need to commit to four to five years of the practice before they draw conclusions. 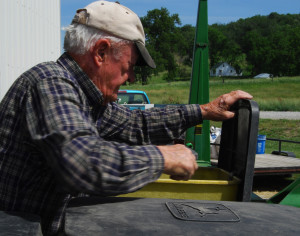 His extension philosophy is simple but profound:  knowledge to benefit others. In 2003, the Center, originally called Graves Farm, was renamed to honor Chapple’s dedication to improving agriculture in northwest Missouri.

Chapple retired from MU Extension in August 1999, but he still works part time when the Center needs his help most: planting and harvesting seasons. Recently he planted inoculated soybean seeds as part of a research project comparing their performance against non-inoculated seeds in an area that was flooded.

More than 75,000 acres were flooded last year in Atchison County alone, and although the water has receded, the wake of the damage it caused has not. 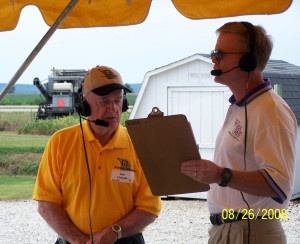 Jim Crawford, superintendent at the Center and natural resources engineering specialist for MU Extension, said they’re using the unfortunate circumstance of the flood to update research trials. Crawford took over for Chapple, and is thankful to have his input and expertise still at the Center.

“He’s familiar with the equipment and with the land. It’s often him supervising me rather than the other way around,” Crawford said. Having Chapple and others’ knowledge allows the staff to do 80 percent of their machinery maintenance in-house.

“There’s still farm in the boy,” Chapple said of why he continues to enjoy his work planting and harvesting crops and repairing machines at the Center. “It gives me a chance to get my hands dirty now and then.”

The results of Chapple and others’ hard work will be showcased at the Center’s annual Field Day August 28 and FFA Day September 28.