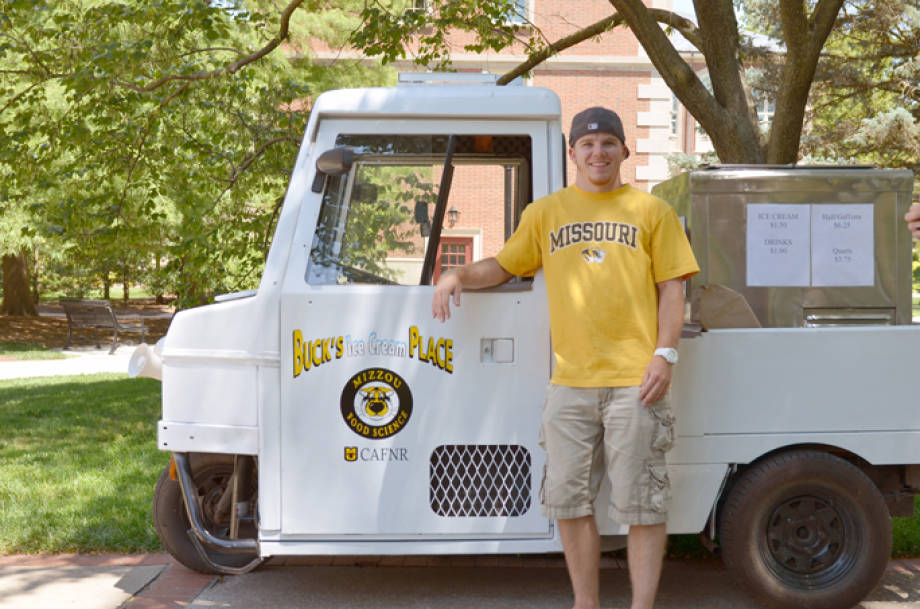 For decades, Mizzou students had to trek to East Campus to enjoy a Buck’s Ice Cream Place treat.  Now, the confections are coming to main campus in a pair of motorized three-wheeled ice cream trucks.

Buck’s is using the weeks before the fall semester to test routes the vehicles will eventually patrol.  For years, the scooters were a fixture in Kirksville, Mo. When the family who operated that ice cream business retired, the College of Agriculture, Food and Natural Resources purchased the vehicles.

The trucks were purchased with funds provided by the ice cream industry and administered by Robert Marshall, professor emeritus of food science.  Two agribusiness seniors from Atlanta, Mo., Jeremy and Jamill Teter, volunteered to refurbish them in MU colors.  Plastic clown heads that the vehicles wore while in Kirksville have been removed and are sitting on an ice cream cooler in Buck’s.

The original owner of the 1970s-vintage scooters was the New York City Police Department who used them for parking control.  Some New York-style graffiti scratched into the windshield on one of the trucks is still visible.  This truck has 14,650 miles and 35,000 hours of operation on its odometer.

Rick Linhardt, coordinator of research activities at Buck’s, said the trucks will roam campus between now and the fall semester to scout out the most promising sales locations.  In the first two days, the area around Jesse Hall has been particularly good.  He and the students will experiment with making ice cream deliveries and working with student club fundraisers.  Of course, he said, the trucks will become familiar at tailgating hotspots during football games.

Right now, a cassette tape deck and a pair of speakers on the vehicles play children’s ice cream music.  That system will be replaced by a modern MP3 player with various Mizzou fight songs, Linhardt said.