What’s better than canoeing on a stream with your friends? Doing it for a living and helping to maintain Missouri’s water quality. 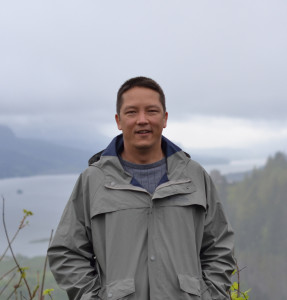 Tony Thorpe is the coordinator of the Lakes of Missouri Volunteer Program. This effort, funded by the U.S. Environmental Protection Agency, leads hundreds of volunteers who sample water from various lakes across the state. The work is designed to create a real-time snapshot of the water quality, a database of changes and educate the public about water quality issues.

It’s a tough job, but someone has to do it. Thorpe regularly heads out to a lake to work with the volunteers as they drop their sample containers to various depths. Thorpe makes it a point to work with each volunteer at least twice a year.

Samples the volunteers get are analyzed for numerous clues of water health including the amount of algae suspended in the water. Algae are small plants that provide oxygen for fish and other aquatic life. While some algae are essential for a healthy lake, too much can have a negative impact.

The analysis also measures the amount of nitrogen and phosphorous in the water. These two nutrients act as fertilizers, promoting algal growth. In some lakes, these inorganic solids give the water a brownish color.

Volunteers are trained to conduct a Secchi transparency reading. They use a Secchi disk, an eight-inch diameter black and white circle that is lowered into the lake until it disappears, thus providing a measure of water clarity. Missouri lakes have a wide range of Secchi values, from less than 10 inches to 30 feet. Changes in clarity can indicate a change in the lake.

Thorpe was born and raised in Columbia and began his studies at Mizzou as an art student. He realized that could be a bad fit as he really enjoyed fishing along Hinkson Creek and wondering about the life that called it home. He switched to limnology and studied under John “Jack” Jones, now the J. Michael Dunmire Professor and Department Chair of Fisheries and Wildlife. Thorpe stayed on to manage the water quality study.

Thorpe coordinates almost 200 volunteers who range from retired engineers to school teachers to high school kids with a love of nature. Turnover among the volunteers is low – some have been with the program since the program started about 20 years ago.  The volunteers hit the waters in everything from cheap kayaks to large motor boats. 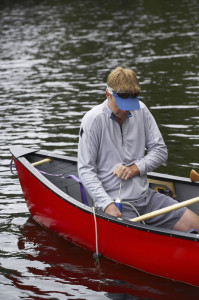 Thorpe tailors how he works with each volunteer to allow that person to gain something from the experience – either to learn something new or develop a new skill. A school kid may be amazed just to see a photo of the small creatures that live in these waterways.

One person near St. Louis, Thorpe said, has developed a real love of zooplankton and taken his volunteer project to a higher level. He purchased his own microscope and camera to better record and monitor the health of these small organisms.

When this volunteer’s efforts became more sophisticated, Thorpe worked with him to obtain sensors allowing temperature readings at various depths. Thorpe is also working with him on other experiments and scientific protocols to better capture and evaluate the data.

Thorpe and the volunteer are working on an unexpected problem – something has been chewing the temperature sensors in the deep quarry lake where the research is being conducted. The volunteer is designing a covering made of PVC pipe to protect the mechanism.

Other data collecting projects can get quite involved, too. Thorpe coordinates a loose group of enthusiasts called the Kayak Swarm that are plotting water quality data along the Meramec River and its tributaries. This group selects a tributary and, paddling in formation like a small fleet, systematically collects samples. This provides a very complete snapshot of the health of the waterway selected.  The group even publishes their data on a webpage to coordinate with others watching the health of their streams.

Of course, Thorpe has to break out his canoe and go along on these missions, sacrificing his free time in the name of science.