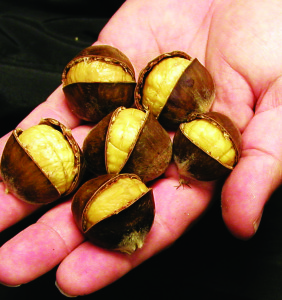 Chestnuts—we’ve all heard or sung about them roasting over an open fire, but what about brewed in beer, or ground for gluten-free flour?

Those are just a few of the ways chestnuts grown in Missouri are being consumed in a budding marketplace, and one that Mike Gold, associate director for the Center for Agroforestry at MU, says has great potential to blossom nationally.

Gold and his MU colleagues have researched and developed cultivars of Chinese chestnuts for over a decade at the College of Agriculture, Food and Natural Resources (CAFNR)’s Horticulture and Agroforestry Research Center (HARC) in New Franklin, Mo. His colleague, Parker Fadler, and several other MU scientists will share their horticulture and agroforestry research at HARC’s upcoming Field Day June 30.

From chestnut hummus and soups to apple-chestnut mini muffins, the culinary possibilities for chestnuts are bountiful. While traditionally associated with the fall and winter holiday seasons due to October harvests and “The Christmas Song” popularized by Nat King Cole, entrepreneurs are finding creative ways to add the sweet, mild flavor of chestnuts to the mix, such as the St. Louis-based Urban Chestnut Brewery’s Winged Nut beer. 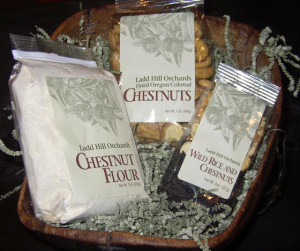 High in complex carbohydrates and 99 percent fat-free, chestnuts are a healthy addition to just about any meal. They are the only nut with a significant amount of Vitamin C. Like all plant foods, chestnuts contain no cholesterol.

The vast majority of chestnut sales are fresh chestnuts, but Gold says the market opportunity for value-added products is promising. Currently, chestnuts for commercial production only cover a few thousand acres in the U.S. However, recent market research from the Center for Agroforestry shows consumer preference for purchasing locally grown chestnuts over imported chestnuts is 15 fold.

Chestnuts in Your Yard and on the Farm

Chestnut trees require close care for the first few years. It’s ideal to have well-drained soils to prevent root rot, and to fence the growing trees to protect them from bunnies, deer and other critters that might make a meal of their leaves or damage the bark. Home producers need two trees of different cultivars for pollination. They can expect a harvest of up to 25 pounds per tree, per year once the trees mature (sometime after age 10). 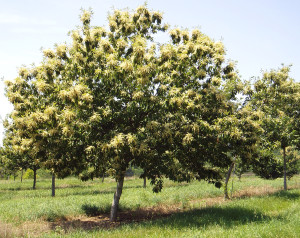 For those looking to grow on a larger scale, alley cropping, or growing crops between the rows of trees is an option to boost productivity of the land, especially in the first 3-5 years of establishing an orchard. Gold said he knows of growers raising pumpkins between their chestnut rows in Missouri.

A mature orchard can produce 2,000 pounds of chestnuts per acre for decades. Gold recommends 50 trees per acre with 30 feet spacing between trees and rows for optimal production and health of the trees. The river hills of Missouri with loess soils are some of the best places to grow chestnuts.

The Center for Agroforestry has 60 cultivars of Chinese chestnuts (Castanea mollissima) in trials at HARC. Chinese chestnuts are resistant to chestnut blight, which killed nearly 99 percent of American chestnuts from 1900-1940. Qing, Gideon and Sleeping Giant are three of the best cultivars researchers have evaluated. Attendees to the June 30 Field Day can explore a mature chestnut orchard and ask the experts about everything from soil types and species selection to sauté options.

“Our job is to be a catalyst for other growers,” Gold said.