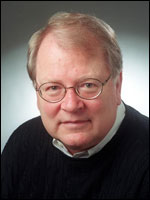 On May 2, he was inducted into the Cooperative Hall of Fame at Washington D.C.’s National Press Club after a public forum on cooperatives connected to the United Nations declaration of 2012 as the International Year of the Cooperative.

He has been a CEO, a mentor to CEOs of national and global cooperatives, counseled cooperative leaders in more than 40 countries, inspired students who have gone on to be leaders and award-winning professors and is still striving to solve the global hunger problem—a goal he’s pursued since serving as a Peace Corps volunteer in Uruguay in the mid-1960s.

Cook, the Robert D. Partridge Endowed Professor in Cooperative Leadership and executive director of the Graduate Institute of Cooperative Leadership (GICL) in CAFNR’s Division of Applied Social Sciences, joins the likes of Howard Cowden, who was the founder of the cooperative that became Farmland Industries. An endowment in Cowden’s honor started GICL, which Cook has overseen since 1993.

Cook is one of only six educators who have been inducted into the prestigious group since 1976. Dick Vilstrup, Cook’s mentor during his graduate studies at the University of Wisconsin, is one the others. Vilstrup introduced Cook to cooperatives. “I was inspired by his brilliant mind; every time I went to see him he had 10 new ideas and he was working on them all. He was fantastic,” Cook said of his former teacher.

Cook has passed on that inspiration. Fabio Chaddad, assistant professor in Agriculture and Applied Economics in CAFNR, was one of Cook’s graduate students, who, like Cook, won the Edwin G. Nourse for outstanding dissertation on cooperatives.

“Mike exposed me to the economic importance and complexity of coops and the opportunities to do research with coops; he inspired me to study coops,” Chaddad said. “He advised me to find my own teaching persona to connect with students as well. It was good advice and it helped give me the freedom to experiment,” Chaddad said.

“Few educators are recognized and this confirms and validates what a unique program GICL has been over the past four decades,” said Kristi Livingston, a project development specialist in agricultural economics who has worked with Cook for the last 18 years. She started working with Cook after taking his coops class. 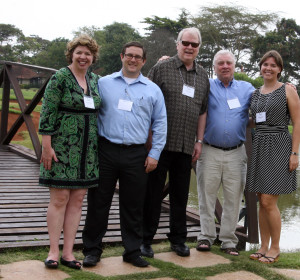 “Mike is gifted,” Livingston added. “He has a unique perspective because he served in industry; he was a CEO of an agricultural cooperative and he takes that hands-on knowledge of how cooperatives work and function in the real world and that really guides all of the research that he does. He’s able from the advances in economics of organization theory to help cooperative leaders better understand the issues and challenges they face because he can use theory and research but in a way that’s really applied. He is uniquely gifted in the way he bridges those two worlds.”

Collaborating for Cooperative Success at Home and Abroad

More than 2,000 cooperative leaders have graduated from the GICL institute. The GICL board is composed of influential leaders, such as Tom Payne, Vice Chancellor and Dean of CAFNR at MU and CEOs, including Jerome Taylor, President and CEO of MFA Oil and a graduate of the GICL summer institute.

Taylor commented that MFA has hired several of Cook’s former students. In his letter to the Cooperative Hall of Fame selection committee Taylor said the following: “Mike Cook has done more to refine, regenerate, empower and strengthen the cooperative form of business than any individual in this country, and perhaps globally, because his services are requested all over the world.”

Cook recently returned from a trip to Kenya and Uganda, where he and David O’Brien, professor of rural sociology in CAFNR, are advising Land O’ Lakes International Development, a not-for-profit division of Land O’ Lakes, Inc. that works “to help our fellow farmers around the world and to improve the efficiency of markets and the viability of agribusinesses.” The project brought together dairy farmers from all over the world, including Nicaragua, India, the U.S and Kenya and Uganda.

“Dr. Cook and Dr. O’Brien have been not only advisors to the project from a technical perspective but also boots on the ground, collecting data, helping us to understand how our project could be positioned in terms of leading frameworks and thinking in the research community,” said Rebecca Savoie, project manager for the Cooperative Development Program, managed by Land O’ Lakes International Development and funded by US Agency for International Development (USAID).

Back in the classroom, Cook and O’Brien also team up to teach a graduate class on collective action.

“It’s one of the best classes I’ve taken,” said Phillip Mohebalian, a PhD student in forestry who also served in the Peace Corps in Paraguay. Mohebalian plans to apply the concepts he explored in class to work with communities to manage their forest resources.

Mohebalian also noted that the concepts of collective action can move from the global scale, such as addressing climate change to small situations, too. He also hopes to solve the forestry graduate student coffee dilemma, where several students partake of the collective good—coffee—but don’t contribute to the supply often enough or at all.

“This class changed the way I think about how people work together.” Mohebalian said.

Cook will continue to innovate, inspire and lead cooperative education, research and practice. Of all his successes, he said he’s most proud of his students and the global network they’re creating through research, outreach and education.

“One of the reasons he has such a passion for coops is that deep inside he’s a Peace Corps Volunteer who wants to serve the world,” said Juanamaria Cordones-Cook, his wife and a professor of Spanish at MU. “That’s one of the things I admire in him—the desire to give to his fellow human beings, to make like better for other people.”