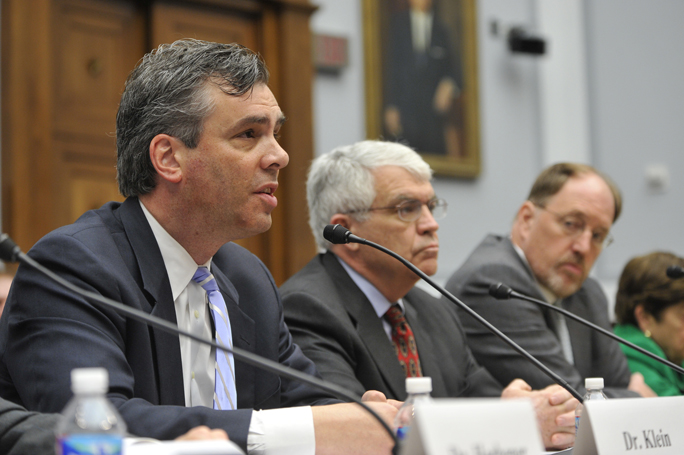 Peter Klein, associate professor of agricultural economics and director of the McQuinn Center for Entrepreneurial Leadership at the College of Agriculture, Food and Natural Resources (CAFNR), University of Missouri, testified to the Financial Services Subcommittee on Domestic Monetary Policy and Technology on May 8.  The subcommittee is examining six legislative proposals that either reform or abolish the Federal Reserve System.

Calls for reforming various aspects of the Federal Reserve System have existed since its creation in 1913. However, with the onset of the financial crisis of 2008-2009 and during the prolonged recession, calls for reform have escalated.

The McQuinn Center for Entrepreneurial Leadership is a research, teaching, and outreach center focusing on the organizational and managerial aspects of entrepreneurship and its application to business strategy, entrepreneurship education and economic development.

The center was established in the Division of Applied Social Sciences within CAFNR in 2004 with the support of Al and Mary Agnes McQuinn.

The Center sponsors academic and practitioner-oriented conferences, it provides financial support to faculty and students, and its Faculty Fellows teach the core entrepreneurship, strategy, and organization courses in the College of Food, Agriculture, and Natural Resources.

The center is particularly interested in the commercialization of new ideas, especially as they relate to the establishment of new forms of organization. “We focus on innovations and creative activities within and between enterprises that contribute to economic growth, as well as the institutional context of entrepreneurial activity,” said Klein. “We strive to provide a bridge between entrepreneurs and academia to increase the knowledge flow in both directions. We set an example for colleagues at the University of Missouri by incorporating entrepreneurship into all aspects of the educational enterprise.”

Klein earned his Ph.D. in Economics from the University of California, Berkeley in 1995. He studied industrial economics, economics of institutions.

He has written or co-written five books including Organizing Entrepreneurial Judgment, A New Approach to the Firm and The Capitalist and the Entrepreneur: Essays on Organizations and Markets.  Klein taught previously at the Olin School of Business, the University of California, Berkeley, the University of Georgia, and the Copenhagen Business School. During the 2000-01 academic year he was a Senior Economist with the Council of Economic Advisers.

He blogs at Organizations and Markets and entrepreneurship@McQuinn.