Langston Simmons was selected as the 2012-13 George Washington Carver Graduate Fellowship recipient at the University of Missouri. The fellowship is awarded through CAFNR’s Agriculture Experiment Station to a minority graduate student who most personifies the research and educational efforts Carver was so well-known for.

George Washington Carver received acclaim for his accomplishments at Tuskegee Institute (Ala.) He was also the first African American to attend Iowa State College. Carver devoted his life to research and education for the improvement of agriculture. He strived to improve the lives of those engaged in agriculture.

Simmons grew up in a western suburb of Birmingham, Ala. Growing up, Simmons was involved in church, sports and various academics programs. He also participated in Boy Scouts of America where he achieved the rank of Eagle Scout.

Simmons received a B.S. Degree in Plant and Soil Sciences from Tennessee State University. He graduated in 2005 with a 3.92 GPA. During the summers, Simmons interned at the U.S. Forest Service in Fulton, Mo.

“Making good grades proved to me that I could commit to and remain dedicated to a task,” Simmons said in his application. 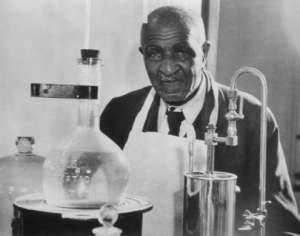 Following graduation, Simmons went on to work as a biological scientist for the Forest Service he interned for in Fulton.

Felix Ponder, Jr., Simmons’ supervisor, wrote in his recommendation letter, “He has shown me not only the willingness but the determination to succeed.” He also described Simmons as a deep thinker who is not afraid to take an active role in his education. The letter was one of the final actions Ponder completed prior to his death from complications of pancreatic cancer.

Simmons’ desire to learn how he could improve peoples’ lives through agriculture encouraged him to go to graduate school.

“My goal is to further my understanding of the soil resource and apply this knowledge towards the betterment of our society,” Simmons said.

At MU, Simmons quickly stood out as an outstanding student. His CAFNR professors have described him as “exceptionally mature,” “self-motivated” and “organized.”

“He asked relevant questions that stimulated more discussion among students,” said John Kabrick, cooperative assistant professor. “He received one of the highest grades in my class.”

Simmons’ work ethic and contribution to the classroom made him a natural choice for the fellowship, which is in the amount of $5,000 for two consecutive semesters, totaling $10,000.

Outside of graduate school, Simmons serves as an adviser for Iota Phi Theta at Lincoln University and a mentor coach for a Fulton middle school boys program, Team Challenge.