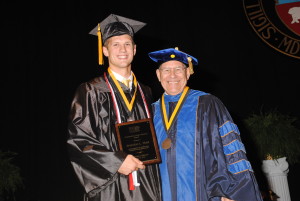 During his time at the College of Agriculture, Food and Natural Resources, Thiel served on the CAFNR Steering Week Committee, CAFNR Student Council, MU Homecoming Committee, Omicron Delta Kappa honor society, Alpha Gamma Rho fraternity, and others; all with an executive or officer role.

He studied abroad in New Zealand in addition to taking part in three different internships.

In the words of his nominator, Dr. David Trinklein, “It’s only once in a great while that a student emerges who so clearly outdistances himself relative to academic performance, extra-curricular involvement and personal achievement.”

In his application, Thiel wrote, “I just consider myself a regular student who has been presented with some great opportunities.”