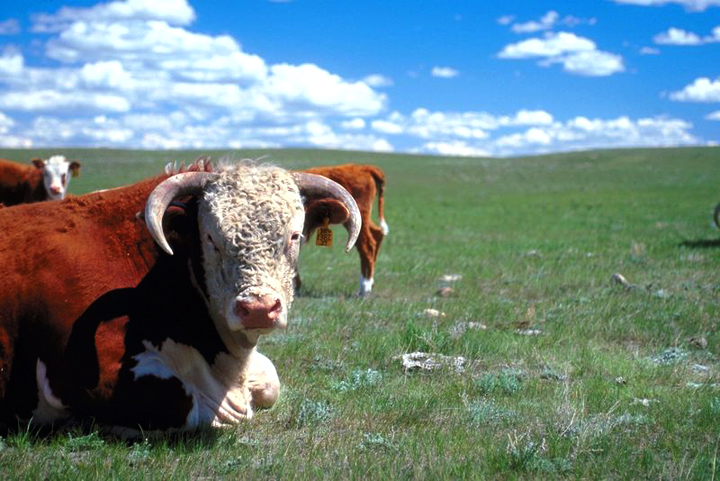 All bull semen is not created equal, but Peter Sutovsky has found a way to level the bovine-fertility playing field.

Research from the CAFNR Animal Sciences reproductive scientist identifies faulty sperm and takes them out of the equation for artificial insemination (AI) of cattle.

“There are many types of hidden sperm defects that are not obvious and cannot be identified by conventional analysis,” Sutovsky said. “We look at biomarkers to improve our ability to correctly evaluate semen and to give us an idea about fertility of a bull that is used in an artificial insemination program.”

Those markers serve as a red flag, giving researchers a tool to identify sperm that just can’t get the job done. 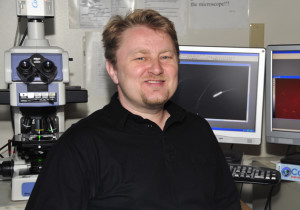 One of those flags is ubiquitin, a protein found in most tissues. One function of ubiquitin is to tag other proteins that are defective or no longer needed. Scientists have dubbed ubiquitin the “kiss of death” because proteins tagged with it are dismantled and recycled.

What comes next sounds like a bad practical joke, but really is how researchers can make sperm samples more potent. It involves a magnet and a test tube filled with sperm.

In faulty sperm, ubiquitin migrates to the surface of the cell. Using nanotechnology, Sutovsky coats small metal particles with an antibody that lets the nanoparticles bind to ubiquitin on the defective sperm, then uses a strong magnet to literally pull down those cells. “When we pull down bad sperm in a test tube, we can skim off the good sperm cells,” Sutovsky said. “That means that we can use fewer cells per dose if we isolate only the good ones.”

For the cattle industry, these advancements mean better fertility through AI and lower costs. By making entire semen doses fertile, smaller amounts could be used to get equal or better pregnancy rates in a cow herd.

“The standard AI dose is around 20 million sperm. If you can cut it down to 10 or 15 million, that would be beneficial,” Sutovsky said. “We collaborated with USDA in one trial using semen that was prepared at a commercial bull stud farm using this method. When we inseminated 500 cows and heifers, they showed the ability to obtain normal pregnancy or conception rates with semen that has a much lower concentration of sperm.” 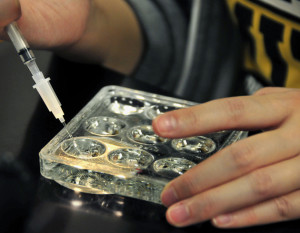 High-quality semen is key to developing a good cattle herd. While many farmers buy bulls and approach breeding the old fashioned way, bulls are a significant input cost that can be lost to disease, lightning or just flat out fail to perform. Environmental factors like heat stress can also make bulls infertile at certain times. More farmers turn to AI for its reliability and the ability to purchase sperm that will produce better traits in the subsequent newborn calves.

The potential of Sutovsky’s process to be cheap and easy sweetens the deal. AI farms can refine samples using his method without buying expensive equipment.

“In the lab we use a very simple, regular magnet. It’s a little stick with three magnets on it. You put three test tubes on it and within a few minutes it pulls down all the metallic nanoparticles and the bad sperm with it,” Sutovsky said.

Since ubiquitin is ubiquitous in all cells, this process can work similarly with other animal species.

Sutovsky’s research is funded by the USDA and the Missouri Life Sciences Trust Fund. Read more about this research in the journal Theriogenology at dx.doi.org/10.1016/j.theriogenology.2011.05.009.