Thomas Johnson, the Frank Miller Professor of Agricultural and Applied Economics, Division of Applied Social Sciences, was awarded the 2012 President’s Award for Economic Development by the University of Missouri System. 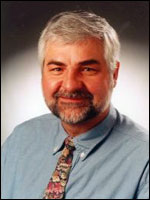 Thomas Johnson is the Frank Miller Professor of Agricultural and Applied Economics at CAFNR and professor in the Truman School of Public Affairs.

The award recognizes faculty for distinguished activity in meeting MU’s goal of serving as an economic engine for the state.  Awardees demonstrate entrepreneurial innovation in using the classroom, outreach programs or the laboratory as vehicles for increasing or developing new economic activity.

DASS Director Jill Findeis said Johnson has made important contributions to economic development by providing decision-making tools throughout the state. “This work has been very important to Missouri because it has allowed citizens and their elected and appointed officials to better ‘know’ the implications of their choices, thereby reducing uncertainty in decision-making and increasing the likelihood that communities will be stimulated to move forward,” Findeis said.

Findeis also said Johnson brings new information to the citizens on development options and solutions that have worked in other regions, states and communities.

Johnson joined MU in 1997.  He was awarded the Undersecretary’s Group Honor for Excellence by the U.S. Department of Agriculture in 2007, and was named a Fellow by the Southern Regional Science Association.  He earned the Community Policy Analysis Network Outstanding Leadership Award from the Rural Policy Research Institute in 2001.