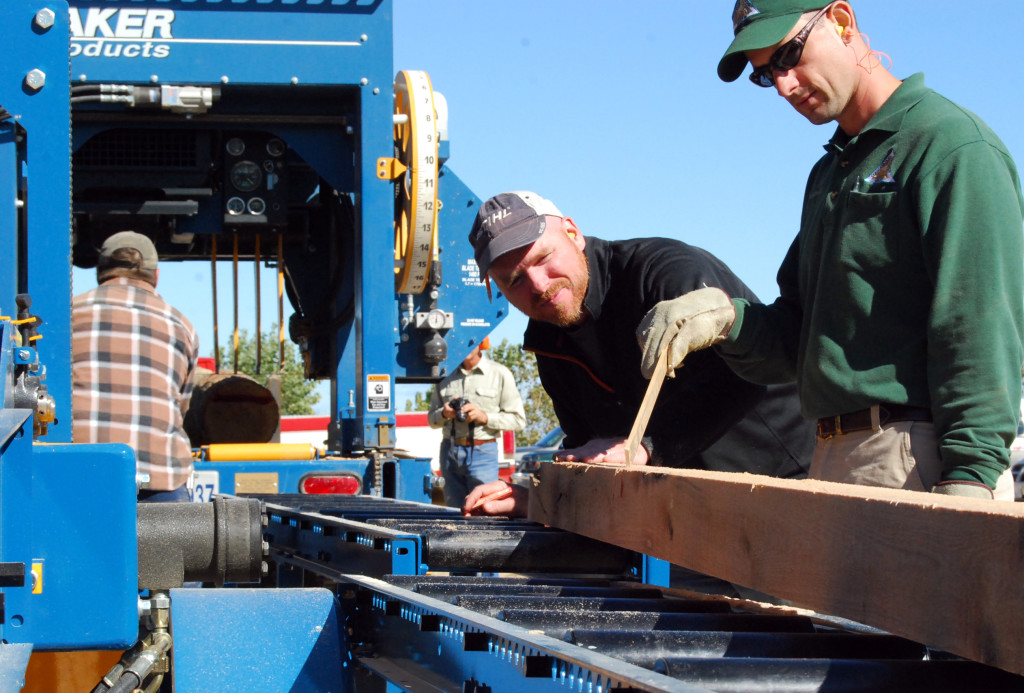 Marschall and Joe Schwartz from MDC examine the fire damage on a freshly milled board.

To burn, or not to burn? That’s a question natural resource managers have asked themselves for years—often coming up with conflicting answers. Joe Marschall, research specialist at the Missouri Tree Ring Laboratory in CAFNR’s Forestry Department, seeks to bring science to that debate.

Marschall, who also coordinates the Oak Woodlands and Forests Fire Consortium, notes that not all natural resource managers see eye to eye on prescribed burning in areas with merchantable timber. “People all across the country are talking about this; prescribed fire is more and more often used as a management tool,” Marschall said.

However, its use is hotly contested. Marschall recently presented a poster summarizing his findings at a natural resources conference. The first two people who looked at it, a forester and a wildlife manager—both from Kentucky, started arguing about fire management.

Marschall, who is also pursuing a master’s degree in forestry at MU, created a tool to systematically assess the value loss in lumber quality of red oak trees due to prescribed fire. “It’s a tool that will enable a forest manager to go out in the woods and determine what value loss in timber products a particular tree has experienced to date. It’s a snapshot and a solid model—anyone can go out and do it.” The equipment for the job: Marschall’s chart and a ruler. 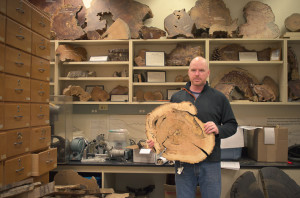 Marschall holds a red oak sample in front of one of the displays in the Tree Ring Laboratory. Photo by Keith Montgomery

The study was sparked by a request from the Missouri Department of Conservation (MDC). Researchers at the Missouri Tree Ring Laboratory did a study a few years ago looking at volume loss from fire damage, not at lumber product value loss.

MDC asked them to expand the study. In the first study, researchers measured amount of volume injured by fire by taking cross sections from the trees. In Marschall’s study, they actually harvested and milled the lowest log (usually the only portion of the tree impacted by fire) of fire-injured trees into dimensional lumber. 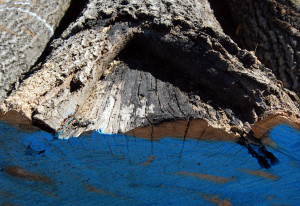 Fire damage on one of the trees in the study.

About 30 trees were felled and harvested from each site. They partnered with Baker Products of Ellington, Mo. to mill the logs into lumber. Marschall instructed the sawyer to ignore the fire damage and cut for the highest grade possible. A National Hardwood Lumber Association trained grader evaluated and scored each of the 1315 boards for their actual value and determined what their value would be without fire defects, if fire defects were present.

Marschall noted that slabbing process—where the sawyer trims and squares the log on the sawmill—often removes much of the area damaged by fire, especially if the damage is less than five years old.

“What we’re after is solid information in an area where there wasn’t solid information,” Marschall said. “With this data, managers might change the way they harvest and not leave the trees with defects in the forest.”

Marschall has worked in the Missouri Tree Ring Laboratory for the last eight years. An interest in conservation and maintaining the wellbeing of natural resources led him to study and work at MU. He’s been able to further his academic research while gaining hands-on experience in the lab and at field sites across the country, including Pennsylvania, Nebraska, Arkansas, Kentucky, Tennessee, California, Oklahoma and Missouri. 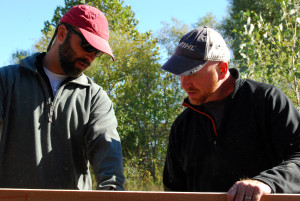 Marschall and Mike Stambaugh, research assistant professor in forestry, discuss a defect on a recently milled board.

He was recently appointed as the consortium coordinator for Oak Woodlands and Forests Fire Consortium, a group spanning nearly one million hectares and 11 states whose mission is to “provide fire science to resource managers, landowners, and the public about the use, application, and effects of fire.”

The effects of prescribed fire on forests will continue to be a burning topic to as more research is produced and the team works to extrapolate their findings to the landscape level.

The consortium will host a workshop on prescribed fire and timber quality in Poplar Bluff, Mo. in October.