One was shaped like a picnic basket. Another was built to look like a gray Stealth bomber.  Still another was constructed to resemble a submarine.  Then there was the one with a giant dog head, complete with wagging tail and flapping tongue.  They shared one thing – they were all made of cardboard and duct tape and raced in the inaugural Float Your Boat for the Food Bank cardboard boat race April 21 at the A. Perry Philips Lake Park, Columbia. 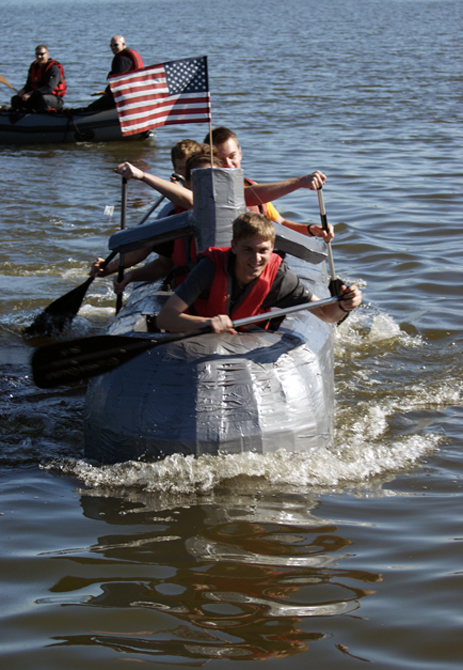 The event, which attracted 20 boats built by mid-Missouri businesses, student groups and radio stations, was a joint fundraiser by the College of Agriculture, Food and Natural Resources (CAFNR) at the University of Missouri and The Food Bank for Central and Northeast Missouri.  $2,460 and approximately 1,800 pounds of healthy food were donated to help The Food Bank supply food to people who don’t have enough to eat in mid-Missouri.

The winning boat was the Patty Mae, sponsored by KOPN Community Radio and captained by David Owens.  He and his crew rowed from a boat ramp, past a buoy and to the dock that served as the finish line in 40.72 seconds.  Second place was the submarine, the USS Enterprise, built by a group called The BBDs, and captained by Levi Knipmeyer.  Third place was a yellow craft constructed by Boone County staff, commanded by Dan Atwill, Boone County presiding commissioner.

The Titanic Best Sinking Award was presented to a boat called the Ruddy Duck. The Most Creative Use of Cardboard Award was given to the Stealth bomber crew, who stood up in their boat and saluted before finishing the race.  The Best Decorated Boat Award went to the Picnic Basket, which sunk also, built by staff of Lenoir Woods retirement community.

“This event is designed to bring the community together to collaborate in an innovative, team-building project, culminating with a fun and unique competition that supports a great cause,” Kristen Smarr, director of CAFNR Communications said.

Fun For a Good Cause

The project is part of a year-long commitment by CAFNR to boost food donations to The Food Bank. The project, Collaborating for a Healthy Future, utilizes the College’s expertise, partnerships and knowledge in areas of agriculture, economics and nutrition. 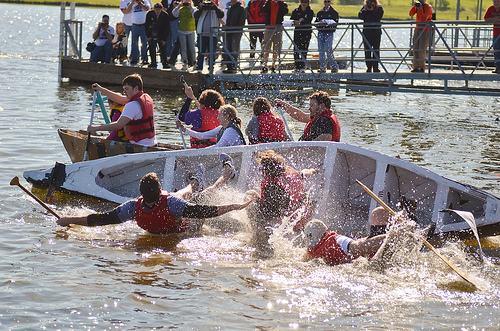 “Recent statistics show that one in six people in mid-Missouri are food insecure, which means that they do not always know where they will get their next meal,” said Peggy Kirkpatrick, executive director of The Food Bank. “The same statistic is worse for children. One in four children in our community experience food insecurity.”

For the project, CAFNR has planted two acres of sweet corn at its Bradford Research Center to provide 14,000-28,000 ears for The Food Bank. CAFNR students volunteered in The Food Bank’s Buddy Pack Program where more than 8,600 children each week receive food to supplement their weekend meals. 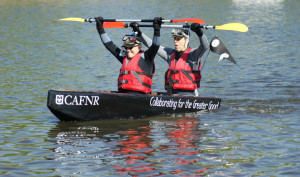 CAFNR is also conducting research to find practical ways that Missouri food banks can improve the diets of people who use food banks.

The Food Bank helps to feed nearly 100,000 people each month in 32 counties in central and northeast Missouri.  It distributes free food to 138 elementary schools through the Buddy Pack Program, a weekend food service for children; and 135 hunger-relief agencies, such as food pantries, soup kitchens and shelters.