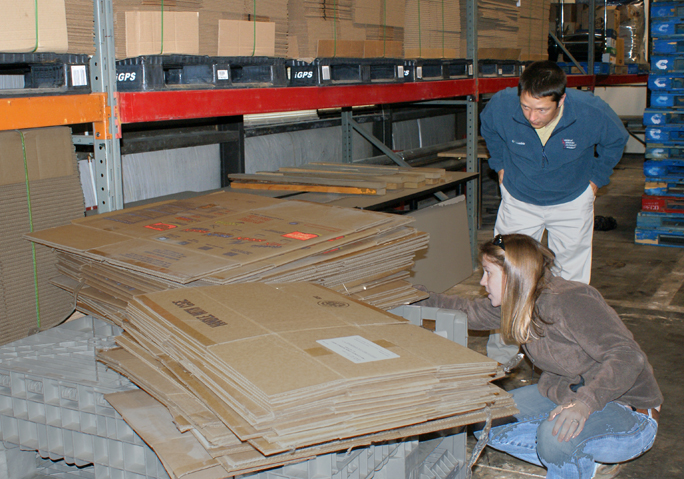 In a warehouse with a mountain of cardboard boxes ready for the taking, skippers and crew building boats for the first Float Your Boat for the Food Bank regatta got a briefing on how the race will be run.

The race is a joint effort of CAFNR and The Food Bank for Central and Northeast Missouri.  The event is a fundraiser with proceeds donated to The Food Bank to supply food to people who don’t have enough to eat in mid-Missouri.  More than 20 boats have registered for the race. Teams include local radio stations, college groups and small businesses.

The racers will have a chance to row to victory April 21, at A. Perry Philips Park, Columbia. 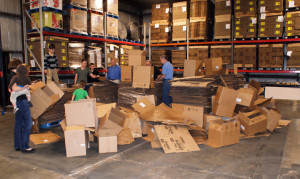 Captains and crew participating in the regatta pick from surplus cardboard at the Food Bank of Central and Northeast Missouri.

The boat skippers learned that they could use corrugated cardboard, latex caulk, varnish, latex paint and glue, but can’t use Styrofoam, metal foils or plastic.  Boats that don’t meet construction rules but are still safe can compete in a special Pirate Race. No prizes will be awarded in this category, however.

Teams are encouraged to get creative when building their cardboard boats.  A pet care retail store is building their boat with ears, nose and tail and is looking to see if they rig up a team of dogs – dogsled style – to pull the boat through the water.  Another team, building a submarine-themed boat, is seeking a permit from the Columbia Fire Department and Parks and Recreation Department to fire bottle rockets –like a missile submarine – during their race.

Prizes will be given to teams who place in the race, have the best decorated boat and make the most unusual use of cardboard. There will also be the Titanic Award for the Best Sinking. Local celebrities will serve as judges. 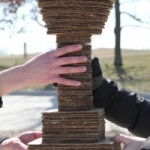 The winning team gets a cardboard trophy, among other prizes.

The race will begin at 9 a.m., rain or shine.  There will be approximately ten races of two boats each.  At least two people will need to be in each boat.  They will row to a buoy in the lake about 100 years away, touch the buoy, then row to a dock that serves as the finish line.

The Need for Healthy Food Donations

The project is part of a year-long commitment by CAFNR to boost food donations to The Food Bank. The project, called Collaborating for a Healthy Future, utilizes the College’s expertise, partnerships and knowledge in areas of agriculture, economics and nutrition. 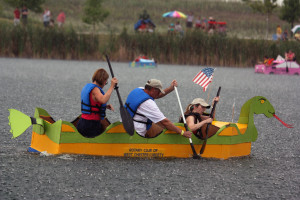 In a cardboard regatta in Ohio, the West Chester Rotary Club used a dragon theme for its boat.

“Recent statistics show that one in six people in mid-Missouri are food insecure, which means that they do not always know where they will get their next meal,” said Peggy Kirkpatrick, executive director of The Food Bank. “The same statistic is worse for children. One in four children in our community experience food insecurity.”

For the project, CAFNR has planted two acres of sweet corn at its Bradford Research Center to provide 14,000-28,000 ears for The Food Bank. CAFNR students volunteered in The Food Bank’s Buddy Pack Program where more than 8,600 children each week receive food to supplement their weekend meals.

The Food Bank distributes free food to 138 elementary schools through the Buddy Pack Program, a weekend food service for children; and 135 hunger-relief agencies, such as food pantries, soup kitchens and shelters. The network helps to feed nearly 100,000 people per month in 32 counties in central and northeast Missouri.

More information about the race is available at: