A passion for the outdoors has guided Walter’s career—although it took him awhile to get there.

After graduating from high school, he studied computer science, but it wasn’t the right fit. He got a job working with electrical technicians for the City of Columbia Water and Light Department, and thought electrical engineering might be a good career path, but that didn’t connect either. He decided to go back to one of his first loves—the forest. The Columbia native grew up near the Hinkson Creek and said he would play in the forest till he heard the dinner bell ringing.

Today, he is where he wants to be: superintendent at the Hugo Wurdack Research Center and director of natural resources management for CAFNR’s out-state research center network.  His appointment was recently announced.

“Walter brings with him an important facet that has been missing from the overall management team for the Missouri Agricultural Experiment Station (AES),” said John Poehlmann, assistant director of the Missouri AES. “Managing our forests has not received the priority emphasis that managing the crop and pasture land on the 14,000 acres that we own has.” 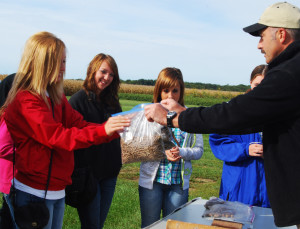 Walter earned his undergraduate in forestry at MU while working for Columbia’s Water and Light Dept. After graduating he did forestry consulting work, including urban tree removal and timber stand improvement (TSI). He brought a question about a timber management plan to John Dwyer, his mentor and an associate professor of forestry at MU, who suggested Walter continue his studies in forestry. “He was inquisitive, asked a lot of good questions and showed a strong interest in forest management,” Dwyer said about why he recommended Walter pursue an advanced degree.

“I got into the science of forestry through the master’s program and discovered I really enjoyed being able to pose questions and figure out answers to those questions and investigate whether what we perceive to be happening is really what’s happening in the natural environment,” Walter said.

Walter has spent the last 12 years investigating questions and sharing his findings with the public while working for CAFNR’s Center for Agroforestry. Much of his research and outreach has been developing silvopasture systems at Wurdack Research Center. Silvopasture is an agroforestry practice that couples managed forests with managed forages for livestock grazing.

“Beyond silvopasture, I’ve also looked at practices like wind breaks and riparian buffers, and have been exposed to a great deal of science relating to how agricultural practices and natural resources can interface and either work for or against each other, be beneficially combined or have detrimental impacts on one another, and how to address these resource concerns,” Walter said.

He’s now charged with that complex task at all of CAFNR’s 17 research centers as the director of natural resource management. “I examine the interface between various agricultural interests across the state of Missouri and our natural resource management and how we can pull those together to be productive, while also exercising good stewardship relating to water quality, soil, and other issues,” Walter said.

Walter said his job has been to find creative solutions, and he’ll continue to do that in his new roles. “Most of us are not challenged to think outside the box and look at how to integrate trees and cattle.  Many foresters don’t think trees and cattle go together. Many livestock producers want to get rid of trees to grow better grass,” he said. Walter demonstrates how that can work, both in hardwood forests and recently in pine stands as well. 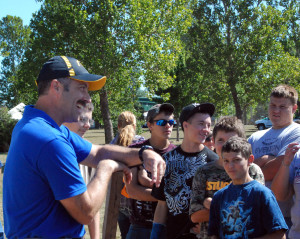 Walter shares a laugh with students during a forestry presentation at Southwest Research Center’s FFA Day.

The forest is a long term product that develops over 60-80 years. “It’s easy not to manage that,” Walter said. “It’s sometimes even tough to recognize that it’s growing out there. It’s there but we don’t see it develop like we do corn, soybeans, wheat or even cattle, but it’s a resource with value potential. I look forward to integrating managed forests with other AES farm production,” he added.

Missouri is one of the top states in terms of the economic impact of forestry. The industry accounts for nearly $1.7 billion annually and employs nearly 30,000 people.

For the past 10 years Walter has developed relationships with the advisory board at Wurdack Research Center and become good friends with Wurdack’s farm manager, Brent Booker.  In addition to his new roles, Walter plans to continue his silvopasture research, including developing pine silvopasture stands at Wurdack.

“The research and the relationships I’ve forged while doing that research has been critical in my role on the Wurdack farm,” Walter said.

Walter is researching opportunities to strengthen connections with Missouri industries and forge new partnerships as well. “Biomass is something we’ll explore and we’re investigating renewable resource energy providers in Missouri; we’d love to collaborate with them not just to reduce our energy consumption but also to showcase the technologies that are produced here in Missouri and how they can apply and benefit Missouri farmers and ranchers,” Walter said.

Researching renewable energy technologies, such as solar energy, may include monitoring how much energy is produced and when that energy is produced; for example, researchers might track how a solar panel’s production might change throughout the year and link that data with a research center’s fluctuating annual use peaks.

“Our superintendents have always looked at the cost of energy very closely because it is a continuing part of their budget that takes away from other developments they could make to their centers,” Poehlmann said.

Walter will coordinate the conservation effort, but he emphasizes the importance of an open exchange of ideas. “Farmers are great at creatively solving problems,” Walter said. “If they can see how we’re using the technology, they can interpret it and adapt it to their own farm situations, in ways we might not have thought of that may make it more effective. Our research centers are places where we can demonstrate technologies and learn from how others apply those technologies as well,” he added.