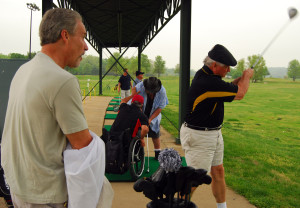 Jerry Hitzhusen has two passions—golf and helping those new to the sport to succeed.

Success doesn’t mean pursuing a green jacket, or even being on the PGA or LPGA tours, it’s measured in what one gains from playing the game.

The list of those benefits is extensive, but Hitzhusen emphasizes the exercise (physical and mental), avenue for companionship, connection to our surroundings, never-ending opportunity for learning and humility—something anyone who has swung a club can attest to—above all.

Hitzhusen, an associate professor of Parks, Recreation and Tourism in CAFNR, was recently awarded the PALESTRA Leadership Award in Therapeutic Recreation, an honor only bestowed every 10 years.

The award, one of many he’s received in his distinguished tenure, acknowledges a nearly 40-year career educating, advocating and leading in the field of therapeutic recreation in more than a dozen countries. At MU, he’s secured more the $6 million in therapeutic recreation grants and programs, and helps coordinate Celebrate Ability Week on campus.

For the last three years, Hitzhusen has partnered with Veterans Affairs in St. Louis to bring the game he loves, and has played on courses from the fabled St. Andrew’s Old Course in Scotland to a walled country club in Caracas, Venezuela, to veterans with disabilities.

Dany Baker is Hitzhusen’s colleague, and an adaptive golf pro that teaches golf to people of all ages and abilities. The two connected 13 years ago at the Midwest Symposium on Therapeutic Recreation, an event Hitzhusen has coordinated for 38 years.

“Jerry’s been around recreation and worked with people with disabilities pretty much his whole career,” Baker said. Baker, an avid golfer, sustained a spinal cord injury 18 years ago. He said his perspective playing from an adaptive cart has helped Hitzhusen become more aware of the accessibility issues people encounter at golf courses.

The Veterans Affairs Office in St. Louis contacted Hitzhusen and Baker three years ago about putting together a program and Boots on the Green was formed.

They work with veterans with all forms of disabilities including PTSD, blindness, amputations, and mobility issues. “We work with anyone who is willing to try it,” Hitzhusen said.

Mark Hess, a Vietnam veteran, was in the first group, and now is an instructor. His home course, Sunset Lakes Golf Course in St. Louis, is hosting this year’s tournament on April 27. After weeks of practicing putts and hitting into a net at the Veterans Affairs Medical Center, the group got to test their skills at the Sunset Lakes driving range. 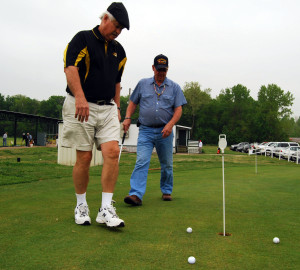 Hitzhusen discusses putting technique with John Poitras, who served in Vietnam from 1968-1970.

It was cloudy, but the rain held off for the group’s first outdoor practice April 4. About 30 golfers, ranging in age from their early 20s to 89, came out to sharpen their swings. Norm Rola served in WWII in the army signal core and later as an MP. Off the tee pad, he consistently cranked out straight, 200-plus yard drives. The eighty-nine-year-old has a lively sense of humor and a welcoming smile. Golf has been a part of his life since his youth, when he used his earnings from caddying to pay his high school tuition.

John Poitras just picked up the game a few weeks ago. The Vietnam veteran has a natural talent for the game, and Hitzhusen helped him adjust his stance to maximize his powerful swing. A subtle shift in his foot placement helped him straighten his shot.

“Jerry has been instrumental in the success of this program,” said John Schmeink, a certified therapeutic recreation therapist at the St. Louis Veterans Affairs Medical Center (VAMC) and coordinator of the Boots on the Green Tournament. “He’s a huge advocate for the benefits of golf and accessibility issues.”

Before they pick up a club, veterans learn about accessibility issues and their rights through the Americans with Disabilities Act (ADA). Hitzhusen wants them to advocate for themselves and others, and Boots on the Green is just another way he shares the benefits of therapeutic recreation. Hitzhusen also lends golf books from his sizable personal library to the group.

The tournament couples veterans with various disabilities with able-bodied vets. The first year 36 golfers teed off, this year the tournament has grown to 72 golfers.

Ultimately, they want to start a Veterans Affairs’ golf league and with the growth of the program every year and more courses learning how to accommodate golfers with disabilities, they’re close to that goal.