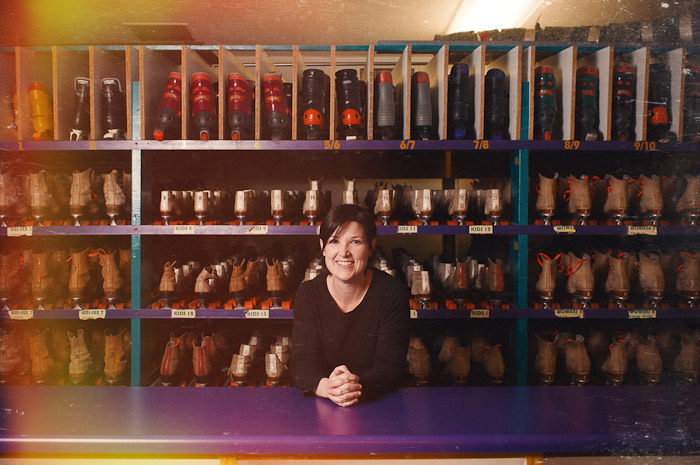 The sport of roller derby embraces and empowers women of all sizes, shapes, ages and personalities on the track. Even through these differences, surprisingly one thing is pretty common among the local players – many of them have ties to MU.

What is it about roller derby that seems to appeal to so many in academia? For a few adventurous CAFNR women, it’s a variety of reasons.

Jenn Schnell, research associate in rural sociology and adjunct instructor in nutrition and exercise physiology, has been a part of the local CoMo Derby Dames since its inception in January 2007. The miniseries “Rollergirls” on A&E, about the revival of the sport, particularly in Austin, Texas, piqued her interest – soon after she heard from a friend that a derby league was forming in mid-Missouri.

“I like to be physically active in a group setting,” Schnell said. “I was drawn to it.”

Schnell’s derby name – and persona – is Dethblok (Schnell is a “blocker” in roller derby bouts – see definitions of derby positions below in Roller Derby 101.) Dethblok is a take-off of the animated metal band Dethklok, from the show Metalocalypse. She wears full ghoulish make-up for bouts and enjoys the creative outlet.

“I’ve always been outgoing but this has made me more of a leader,” she said. Schnell serves as treasurer of the CoMo Derby Dames – they are a non-profit organization in which active skaters make up the leadership.

Roller derby is a contact sport played by two teams of five members roller skating in the same direction around a track. Game play consists of a series of matchups (“jams”) in which both teams designate a scoring player (the “jammer”) who scores points by lapping members of the opposing team. Each team assists their jammer while hindering the opposing jammer. Roller derby is played by more than 1,200 amateur leagues worldwide.

The sport has its origins in the banked-track roller skating marathons of the 1930s popularized by writer Damon Runyon.

Although Schnell hadn’t put on skates since fifth grade prior to her derby debut, Barbara Giles, research associate in biochemistry, has always skated. She remembers rolling around MU’s campus with her mother as a child.

Giles, at 60 years old, said it was “time to do this,” about joining CoMo Derby Dames a little over a year ago. She has since crushed her kneecap during a blocking exercise, but is slowly getting back into the competition.

Giles, or GramSmackHer as she is known in the arena, said she is getting stronger every day and enjoys roller derby because although it is a team sport, she can practice by herself when she has time. She also now gets to go skating with her 5-year-old granddaughter, a “derbylet.” Schnell’s own 3-year-old daughter also has shown interest in the sport.

The link between CoMo Derby Dames and MU is pretty strong – the team is almost considered a farm league – many students, for example, learn the ropes and then go on to leagues in other cities after graduation. (CAFNR student Dana Brown, a senior in fisheries and wildlife, is known as Soxxie Brown during derby bouts.) 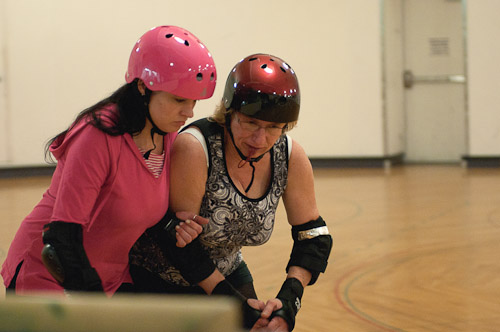 “The correlation I see between academia and roller derby deals directly with learning new skills and learning how to collaborate with others to achieve a greater goal,” said Andrea Waner (Maple Stirrup), co-chair of the CoMo Derby Dames marketing committee. “Quite a few of the CMDD skaters are undergraduates, graduates, doctoral students, as well as professors. We really have the full range of women in our organization.”

The Roller Derby Way to Self Improvement

For Schnell, even the way she has come to think about roller derby is influenced by her work at the university. She sees roller derby as a great way for girls to improve their body image and their activity level. Schnell is a registered dietitian and works part-time at Moberly Regional Medical Center in that capacity. Her position in CAFNR is part of a grant to work with food pantry customers to improve their nutrition.

“Your figure doesn’t matter in roller derby,” she said. In fact, a slender frame preferable for sports such as track or volleyball will work against you on the physical derby track. Schnell sees roller derby as a great way to fight childhood obesity – and sees skating rinks as a safe place in cities where an outdoor basketball court, for example, might not be.

Her long-term goal is to establish a powder puff league to interest participants at a younger age – possibly through partnerships with the Girl Scouts.

“That would grow our sport and do wonders for body image,” Schnell said.

CoMo Derby Dame bouts are generally scheduled once a month – the next event will be Saturday, March 17, at the Skate Zone in Jefferson City, vs. the Springfield Roller Girls. See more info about CoMo Derby Dames online at http://www.comoderbydames.org/