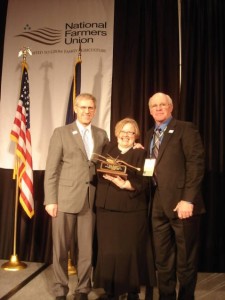 The award recognizes two individuals each year who have made particularly noteworthy contributions to agriculture, humanity and the Farmers Union. It is the highest award the NFU Board of Directors can bestow upon an individual.

“Dr. Hendrickson’s research has formed the basis for a number of Farmers Union policies and has brought to light some of the challenges our members face,” said NFU President Roger Johnson.

Hendrickson’s research interest is in food and agriculture sociology.

“Hendrickson has a long record of research and outreach aimed at building grassroots agricultural production capacity for small farmers in Missouri and across the U.S.,” said Mary Grigsby, chair of rural sociology. “Her early recognition that linking consumers and producers would be key to rural sustainability has driven much of the programming and organizational infrastructure she has helped communities develop. It is great to see her recognized by the National Farmers Union for her work.”