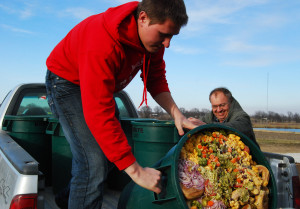 Last November, Tim Reinbott, superintendent at Bradford Research Center, launched an ambitious project to harness a valuable resource that was being trucked to Columbia’s landfill each day — the leftover lasagna, discarded desserts and other pre-and post-consumer food scraps from nine dining halls on MU’s campus. Two-hundred fifty tons of the stuff was going to the dump every year. The Center partnered with Campus Dining Services and the Mid-Missouri Solid Waste Management District to redirect and repurpose the valuable waste stream.

Researchers at Bradford and two biological engineering students, sophomore Logan Forsythe and junior Brent Elliot, collect about 700 pounds of food scraps from nine dining halls every day. They mix it in a Reel Mixer with horse bedding from South Farm, then turn it with a skid loader. They’ve done calculations, monitored temperatures and have turned out high quality compost. In a few weeks, they’ll test the aeration process the students designed. 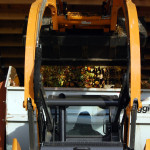 Food waste goes into the hopper where it’s combined with horse bedding, turned and cut.

Elliot said his involvement in the project has caused him to rethink the way he uses resources. “I’ve applied the ideas of recycling personally in my life and think about how I could reuse and recycle more; it’s definitely caused me to change some things.”

Elliot said he and Forsythe hope to turn their work there into a capstone project with Steve Borgelt, director of undergraduate studies in biological engineering and associate professor of agricultural systems management. “People understand how composting works, but doing it on this scale and with these inputs offer new areas for research — especially in trying to do it efficiently and understanding the full cycle,” Elliot added.

A few local farmers have applied Bradford’s “Mizzou Doo” on their winter vegetables and students at Bradford will use it to grow vegetables this spring and summer. “It’s a learning experience — a science and an art,” Reinbott said of the process. One of the lessons they’ve learned is how important it is to get the ratio of food waste to horse bedding correct. If it smells bad and is too moist, they know they’ve got too much food waste in the mix. 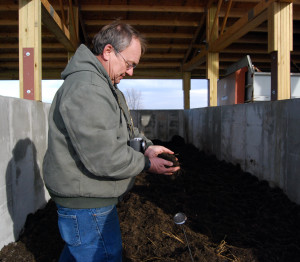 This week they’re collecting waste vegetable oil from the dining halls to explore the most efficient way to convert it to biodiesel and create uses for any byproducts of the process. Once the process is perfected, they can close the loop on the project, providing the fuel for the trucks that haul the food scraps and the rest of the equipment used for the process.

After just a few months of operation, they’re one step closer to Reinbott’s vision of zero waste going from MU to the landfill.

An Art and a Science: a short guide to home composting

If you’re inspired by the closed-loop compost system at Bradford Research Center and want to put your yard trimmings and food scraps to work, spring is a great time to start composting.

Chris Starbuck, associate professor of plant sciences, is a compost expert. He’s been experimenting with it and teaching it for years, and was once dubbed “worm guy” for his research, education and outreach efforts on vermicomposting, or composting with worms.

Compost techniques are as diverse as the life forms in a healthy compost pile. For a novice composter, Starbuck offers a few tips: 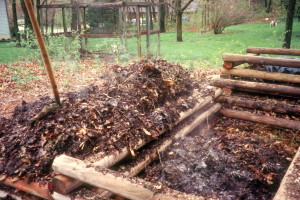 According to EPA data, the average American produces about 4.5 lbs. of trash per day, adding up to 250 million tons of trash per year. Twenty-five percent of that waste stream is food scraps and yard trimmings — the raw materials of compost.  Two hundred fifty millions tons is a tough number to imagine, but a report from the University of Utah puts it into conceivable terms: Picture 63,000 full garbage trucks each day for a year. If they were lined up end to end they would stretch halfway to the moon. 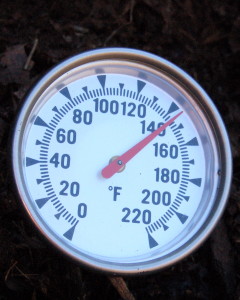 In addition to the good feeling you’ll get from diverting useful resources from the landfill and the calories you’ll burn turning your pile, your finished product will greatly improve your soil, whether you grow roses, radishes or anything in between.

“If you incorporate it into the soil when it’s mostly done it feeds the microbes and they in turn give off sticky substances that stick the clay particles together into little aggregates,” Starbuck said. “That’s why if you’ve been adding organic matter to your garden for years consistently you don’t need a tiller anymore—you can literally reach down to your elbow without any tillage whatsoever.  It makes a wonderfully fluffy, dryable soil and the microbes give off promoting substances for the plants and vice versa — there’s a lot of synergy there.”

For a thorough compost resource, check out the MU Extension guide.