Communicating science to the media or public is scary for most academics. Educators, comfortable when communicating to colleagues or students in the carefully proscribed ways of research, can get lost when trying to explain that same material to a businessperson or reporter.

A hand-picked group of CAFNR faculty recently had the opportunity to learn how to communicate science effectively to differing audiences. CAFNR agronomy alum and expert science communicator Mary Schon guided the first group of CAFNR Communications Fellows through comprehensive communications training this winter, with more sessions to follow. 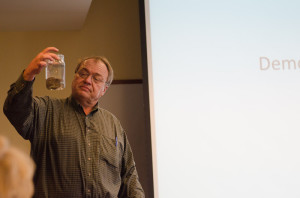 Tim Reinbott presents to the group on his research as part of the most recent session of the CAFNR Communications Fellows.

The eight Fellows were selected based on the topic areas they represent. The program is designed to empower the Fellows to become advocates for their own program areas and for CAFNR. The program’s goal is to hone the fine points of communicating through speeches, presentations, quick “elevator speeches” and media interviews, and then be available for comment when the need arises to announce a discovery or explain the basis of an issue.

Schon worked with the Fellows to create headlines, sound bites, elevator speeches and longer presentations about their research to show them what the media is looking for when writing science articles and what the public and legislators are looking for to learn more about a topic. Local media from print, radio and TV were brought in to conduct mock interviews – even leading to a story about how scientists communicate on NPR. Communications experts from around the university helped critique presentations created for a general audience.

“The interaction and feedback between the CAFNR researchers was inspiring and an added bonus to this unique program,” said Kristen Smarr, director of CAFNR Communications. “They all learned so much about each other’s fields and research. Maybe we will see some future collaborations come out of this program!”

Schon, who served as manager of science communications at Epcot from 1999-2006, is now a senior scientist at the Krell Institute, Ames, Iowa. Her work at the Walt Disney World Resort included training scientists and student interns from around the globe to communicate science effectively to thousands of guests each day, through venues such as The Living with the Land boat ride and walking tour through The Land greenhouses.

“During my years as part of the Epcot Science Team, I had ample opportunity to interact with the American public,” said Schon, who received her Ph.D. in agronomy/plant physiology in 1989 from MU. “It made me realize just how little the public knows or understands about science and agriculture. Most were shocked to discover that agriculture is a high-tech industry supported by science research, and were eager to find out more when the science was made understandable and relevant to their lives.

“I loved to see eyes light up as people of all ages were excited and inspired by science.”

Schon said she is enthused to be bringing that same energy and excitement to CAFNR’s scientists.

“CAFNR has far-reaching impact in the state, nation and beyond. Currently, many of CAFNR’s stakeholders are not aware of this,” she said. “This program will help CAFNR’s dedicated researchers, educators and extension experts communicate effectively with students, alumni, legislators, donors and the media, and engage them in the stories of their work. This will benefit the scientists’ careers and lead to greater visibility for CAFNR and appreciation for its impact.”