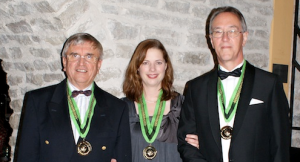 It’s fun to work with fungi.

And Johann Bruhn, associate research professor of plant sciences, is right in the middle of all of the mushroom mania.

Bruhn has been researching truffles since 1999 – and now knows enough about their cultivation in Missouri to promote commercial truffières – truffle orchards – with interested farmers and entrepreneurs. Three farms are taking on the initial challenge to attempt to grow the fickle fungi, as documented in a recent Missourian article. A grower’s guide recently came out online, interpreting Bruhn’s years of lab and field findings for the layperson.

“We’re really on the cusp of solving some of the problems and filling in the ‘black boxes’ of truffle cultivation – where we used to say ‘and now a miracle happens (or doesn’t),’” he said. “We knew many of the essentials, but uncertainties lingered. We are really, really close now. It’s a truly exciting time to be working with truffles.”

Truffles grow through a mutually beneficial nutritional relationship with the root system of a receptive tree species. Native to Europe, it is possible to introduce the Burgundy or Périgord black truffle fungi to the root system of an orchard tree in non-native areas – although there are many factors – and a lot of time – that go into truffle fruiting that knowing exactly how and why some of these truffières fail has been elusive – the “black boxes” Bruhn mentioned.

Recent breakthroughs have included discovering some of the types of bacteria that probably encourage truffle survival and fruiting; inoculating trees with truffle fungus and associated helper bacteria when they are more established, leaving less time for something to “go wrong” with the root/fungus relationship; and developing new farm tools more suited and specific to truffle orchards.

Bruhn collaborates with the top truffle researchers from around the world – and most recently was surprised to receive a medal of honor from the Gotlands Tryffel Akademi as part of an elaborate ceremony in Visby, Sweden. The island of Gotland is the most northerly known place to which the Burgundy black truffle is native; the Burgundy truffle is the type best suited for growing in Missouri.

It’s not hard to understand the excitement that goes into finally being on the cusp of truffle cultivation on a wider scale. Bruhn knows of only one current commercial truffle orchard in the United States (producing Périgord black truffles) – they sell their highest quality mushrooms for $50 per ounce.

“It is a fair amount of work and there are some investments,” Bruhn said of truffle cultivation. “For someone who has the patience though it’s a lot of fun too – some people just have a natural inclination toward it. And I can guarantee the demand will keep pace with the supply.”

A Blooming Interest in Mushrooms

Bruhn became interested in edible fungi while serving as forest pathologist at Michigan Technological University. There he worked with the logging industry to minimize disease in their product – many of the diseases he looked for were actually fungi – and many of those fungi were edible. Soon he was teaching a course on amateur mushroom hunting on the weekends.

He now teaches various workshops at the Columbia Area Career Center on shiitake and truffle cultivation and cuisine. Bruhn is hoping to translate a breakthrough book on truffle research by a French colleague into English very soon. Through a Mizzou Advantage Undergraduate Research Team grant Bruhn works with a group of CAFNR students in diverse disciplines looking at all facets of truffle cultivation – biological, the characteristics of people suited to trufficulture, the rural sociological potential of truffle cultivation, etc.

“Among other more basic research efforts, we are coming up with a bulleted checklist of the stages of truffière establishment,” Bruhn said. Making the process as clear as possible – when dealing with an as-yet unproven crop, that is.

“I’m always really careful to tell people this isn’t traditional ag and there are no guarantees,” Bruhn said. “But if you invest a moderate amount of suitable land and know that everything you do to prepare a truffière is an improvement of the land – wells, soil improvements. It’s not a situation where the investments up front are going to be lost, no matter the outcome.”