Peter Sutovsky, associate professor in animal science and clinical obstetrics and gynecology, is a serious researcher.  For more than a decade he has studied mammalian spermatogenesis, fertilization and pre-implantation embryonic development – the science of reproduction. 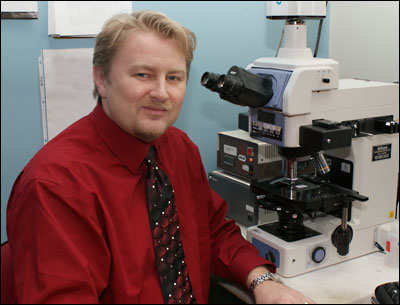 He’s also an accomplished entrepreneur – most recently he was awarded the MU Faculty Entrepreneur of the Year Award. The Entrepreneur of the Year award is an intercampus award given by the President of University of Missouri System and the Office of the Provost and designed to honor a faculty member for outstanding innovation that demonstrates commercial utility and contributes to the public welfare.

But understanding the science of what he sees through his microscope isn’t sufficient.  Sutovsky also sees and captures the beauty of his subjects and shares the images.  His colorful cell images have been featured at the Miami Museum of Science & Planetarium, as well as other art shows locally and nationally.  Lucky friends get his whimsical Christmas cards.

How does a hardcore scientist and entrepreneur go from seeing data to seeing art?

What were you working on when you first discovered the art in your work?  What caused you to notice the beauty?

As a grad student at the Czechoslovak Academy of Science, I got an opportunity to spend six months in Paris, in 1992, studying the process of cow egg maturation in the lab of Jacques Flechon. Monsieur Flechon, as I still call my former mentor, introduced me to the modern methods of cell imaging, for the first time revealing to me the amazing, colorful microcosm of the cells and the radiant beauty of cellular cytoskeleton, an intricate internal scaffold of cells, made of highly organized ultra-thin fibers. Three years later, I was already a postdoc at the University of Wisconsin in Madison, using the same approach (fluorescent labeling of cellular components) to study the fate of sperm accessory structures inside the fertilized mammalian egg. I gathered data to publish a paper in the top reproductive biology journal – Biology of Reproduction, a.k.a. BOR, which had, and still has their offices in Madison. Once the paper got accepted, I jumped on the bike with some prints of my sperm cell pictures (it was before we routinely emailed pictures as attachments) and headed down to BOR office – hence my first journal cover.

Why do you choose to share the beauty you see with others?

Because I hope others will enjoy them as much as I do, including the stories of science behind them.

In what sort of ways do you share your art?

Besides including unadulterated images in my research papers and on journal and book covers, I sometimes Photoshop them into something that people not familiar with gamete biology can relate to. The first one I did was based on those BOR cover pictures that I fashioned into a Christmas tree ornament – hence our lab tradition of making a sperm art greeting card each year before Christmas was born.

What kinds of reactions do you get from people who see your works?

Always a positive reaction, often words of awe over the beauty of the depicted cells. Sometimes a good laugh, too, when I turn the sperm cells into something funny (one of our cards, particularly loved by Dean Payne has Santa’s sleigh complete with rain deer antler-bearing sperm cells). Every year before Christmas, I email those cards to several hundreds of my colleagues, friends, collaborators and acquaintances, and get back dozens of emails – a great opportunity to catch up with everyone before year end.

Does seeing the beauty of science make you a better researcher or teacher?

Yes, these pictures are memorable and really helpful in my teaching and research. I think students retain more information from the class lecture that is richly illustrated; you know the old adage about one picture being worth a thousand words.

What are your favorite 10 images? 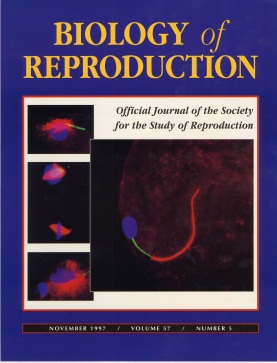 2)      Cover of Developmental Biology from 1997 – sperm cell releasing the egg activating substance during fertilization – my personal landmark paper of my early career. 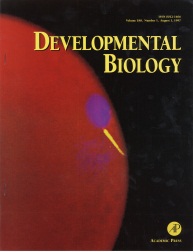 3)      Journal of Cell Science Cover from 2001 – my first paper describing the mechanism that sorts out good and bed sperm cells in male body. 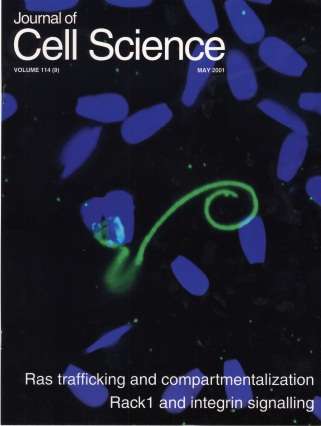 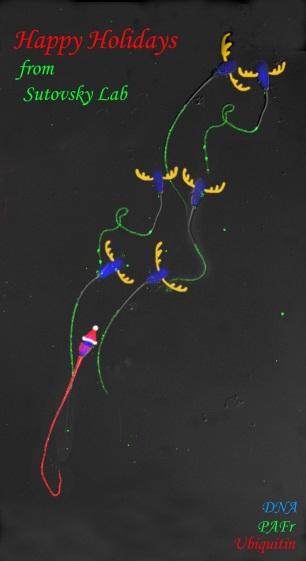 5)      Cover of The Sperm Cell book published by Cambridge University Press, showing cross-section of a small portion of rat testis, in which I fashioned a Jin & Yang sign with Photoshop. 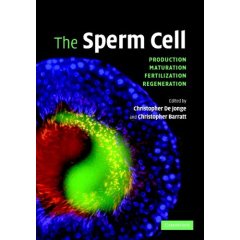 6.       My opossum sperm Valentine – in February, during their season of love (mating season), their sperm cells pair up, joined by their heads, in the storage site attached to the testis. After mating, they support each other bypassing the hurdles of female reproductive track both split up and compete to be the first to penetrate the a egg at the moment they reached it. Those heart shaped sperm pairs are quite amazing. 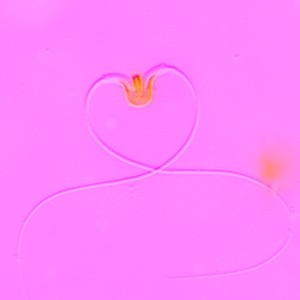 7.       Pictures of pig egg coats squished between a microscopy slide and coverslip that, especially when printed black and white, look like something you would see in a scanning electron micrograph (to a scientist), or a seas sponge or Pacman (to a lay person). 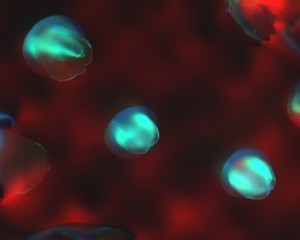 9.       Pictures of mouse eggs from our newest paper in Journal of Cellular Physiology. 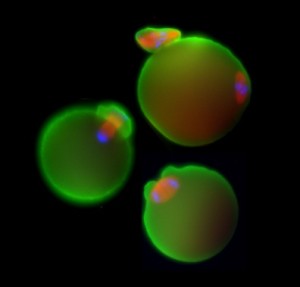 10.   … and our most recent lab Christmas card derived from those JCP pictures: