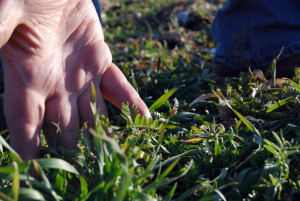 Ask any aspiring organic farmer what weighs on his mind and you’ll likely get the same answer — weeds.

For row crop farmers transitioning from conventional to organic production, the three-year transition period can be daunting. Controlling weeds and improving soil health are the cornerstones to success, but many questions surround the best approaches to accomplish these goals.

Should a farmer focus his energy on building the soil health at any cost, including forgoing a cash crop for a year or two? Can no-till really work in Missouri with the right combination of cover crops? What are the best tools and techniques for the job?

Tim Reinbott, superintendent of Bradford Research Center, aspires to answer these questions for current Missouri organic farmers and those considering growing organically — a population that has sprouted significantly in the last several years. A multi-disciplinary team at the Center will explore the best management practices for the three-year organic transition phase.

Their weapons against weeds: a cocktail of cover crops, including hairy vetch, winter rye, Austrian pea, oats, tillage radish and crimson clover; and a variety of tilling approaches, including no-till, all within a rotational row crop system of cash crops including corn, soybeans, sunn hemp, buckwheat and sorghums.

Their work is funded by a CERES Trust grant, and one of two grants the team was recently awarded for organic research. Together the grants total nearly $1 million, positioning Bradford Research Center to be a leader in organic research for the Midwest, developing best management practices for improved soil health, weed suppression, greenhouse gas emission reduction and improved productivity.

Reinbott said many Missouri farmers are taking the “Show-Me approach” to organic no-till. It was a hotly debated topic at the recent Missouri Organic Association Conference, where he presented. With this research farmers can see the results and evaluate what approach or combination of approaches best accomplish their goals.

“No-till organic is tough because of weed control,” Reinbott said. “We’re trying to work up to that.”  To kill cover crops and prepare for cash crops, they’ll use a roller crimper, compare that method to flail chopping, and also to using a cultipacker –a tool for smoothing ground that many farmers already have.

They’ll also let the plants do the work. Grain sorghum has good allelopathy against many weeds, so it can serve as a natural defense.

Reinbott said stakeholders identified reducing their (carbon) footprint as an important goal and thus are seeking methods of suppressing weeds that don’t demand fuel-hungry methods such as multiple cultivations. 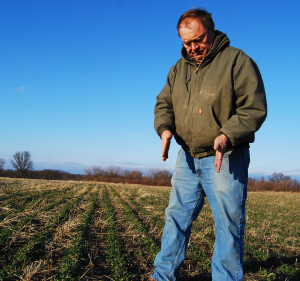 According to prior research, shifting from conventional to no-tillage saves 50 percent of the fuel cost. “For example, it takes about four gallons per acre in a chisel plow system or five gallons/acre if you use a moldboard plow (which many organic farmers do to incorporate their cover crops), whereas no-till uses 1.5 gallons per acre,” Reinbott said.

Missouri comes in 20th for number of organic farms nationally, with more than 30,000 acres in organic production, but its farmers aren’t employing no-tillage, use of compost or green manure and animal manure at the same rate as their national counterparts. For example, 13 percent of Missouri organic farmers report using no-till or conservation tillage compared to 38 percent nationally.

Connecting to the Community

Kelly will lead the outreach efforts to improve those numbers. The team will use eOrganic to share data and news among the team and with the public, as well as sharing their results around the state at field days at CAFNR’s research centers.

“It’s really exciting — we’ve been working on this for four years,” Kelly said. “A lot of farmers have been experimenting on their own, and asking for research; now we have an opportunity to connect with them.

“We’ll invite farmers to come see the research and ask questions of us; it’s a two-way street,” she added. “We’re learning from them so we can do the research together. Also, there aren’t that many organic specialists at universities so we’re working across disciplines, which I think is really cool.

“What I like about on-farm trials is they’re actually living there. It’s their livelihood; it’s research in real time and in a real farm setting,” Kelly said. “We’re just trying to provide the science behind it.”