This past fall Lizzie Wright, graduate student in forestry, overheard Garrett Arnold’s, graduate student in evolutionary ecology, conversation with a researcher. She noticed Garrett was asking questions but still having a difficult time understanding what kind of research the man was currently working on. Lizzie then turned to the researcher and asked him if he could briefly explain it in two minutes. He couldn’t. Lizzie and Garrett suddenly had an “aha moment!” Scientists need to know how to communicate their work more effectively.

Lizzie and Garrett formed SCAPE, which stands for Science Communication and Public Engagement, as an organization for graduate students in the science community. The purpose of SCAPE is to provide members with the “tools they need to more effectively communicate their research to each other, their professional community and public,” according to their constitution. 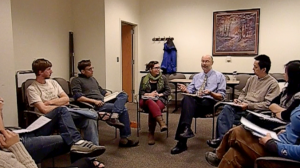 “One of the major parts about being a scientist is that you have to be able to present and explain your research to your colleagues, the community and at conferences,” Wright said. “There is a lot of pressure to present and present well.”

Arnold, President, and Wright, Vice President and Treasurer of SCAPE, recognized the need for graduate students to know how to better present their work.

“By stereotype we’re awkward (scientists),” Arnolds says with a laugh. “It’s about changing that perception and learning how to communicate.” Arnold and Wright recognize scientists such as E. O. Wilson, Carl Sagan, Neil deGrasseTyson, and Bill Nye “the science guy” for their ability to effectively present science to public.

One of the goals of SCAPE is to help scientists find a way to bring out their personality in their presentations, as even great scientists can lose their message due to ineffectively and dully presenting their research.

“A lot of times there is a tendency to be rigid which makes it hard to get your point across,” Arnold said. “When you’re less rigid it makes your research more effective and allows your passion to show through and your story come out.”

So far the meetings, which are every other Thursday at 6 p.m. in 210 ABNR, have attracted about 16 to 17 regular members, Wright said. However, a total of 30 people-made up of graduates and one professor- are on the list serve and have expressed interest in the organization, according to Arnold.

Members are from a variety of different science backgrounds such as ecology, forestry, fisheries and wildlife, biology, engineering, etc., Arnold and Wright said. They credit the variety of majors as another way of challenging members to more effectively discuss their field of science to one another.

The two-hour meetings typically involve an activity, discussion of related readings and a guest speaker. One of their recent meetings featured a presentation by Professor Suzanne Burgoyn of the MU Theater Department. She taught the members how to recognize their audience and then tailor their presentation in a story-like manner for their audience. Members were then given roles and different scenarios to act out.

So far the organization, which recently became an officially recognized campus organization, is mainly targeted only to graduate students and interested professors/faculty.

“As undergraduates you’re mostly learning the language of science. Whereas when you are a graduate student you have to start to kind of unlearn the language in order to be able to explain things in laymen terms,” Arnold said.

Wright and Arnold said they are hoping someone will take the torch and carry SCAPE on or that it will somehow merge with another related organization after they graduate. So far, however, Wright and Arnold are happy enough with the positive response and excited interest SCAPE has received.

For more information about SCAPE visit their website at http://scapemizzou.wordpress.com/.