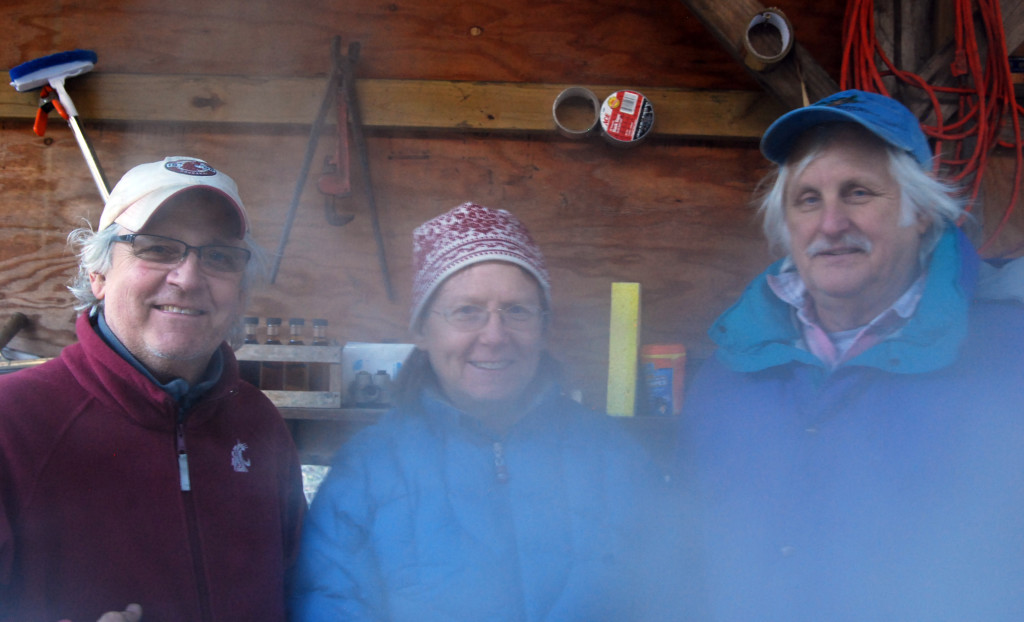 When you drizzle syrup on your pancakes, which state comes to mind? Most likely you think of the green mountains of Vermont.

Think again. Grade A Missouri maple syrup can be had right here in Boone County. Rich Guyette, professor of forestry at MU, has been harvesting, boiling and bottling the sweet stuff for the last 36 years on his property near the Baskett Wildlife Research and Education Center.

While it might be difficult to gauge what season we’re experiencing from day to day in mid-Missouri given the unusual weather, it’s sugaring time on Guyette’s farm.

Sugaring is a communal event, where friends who join in the labor of tapping, harvesting and “cooking” the sap earn a sweet dividend— a bottle of pure Missouri maple syrup. “It’s a labor of love; if you’ve got kids, family and friends, usually you can pay them off with a little bit of syrup,” Guyette said. 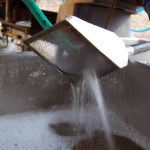 For Missouri landowners, making syrup can also be an intriguing business venture. While most of the commercial maple operations are in the northeast, sugar bushes, or stands of several maples together, are becoming more common here. Changes in fire management and logging practices in the last 100 years have allowed for more maples to flourish, especially along the river hills, Guyette said.

Once, sugaring in Missouri was common. Nearly 20,000 gallons of syrup was produced here as early as 1860. Prior to the changes in the import tax on sugar, making sugar from sap was more practical than buying expensive, imported cane sugar as well.

Though Missouri is known for its oak forests, maples are interspersed throughout much of the state. “Missouri maples don’t yield high quality lumber like oaks,” Guyette said. “If we can’t use it for lumber maybe we can eat it.”

Tom Payne, vice chancellor and dean, is a fan. He recently purchased several bottles of Guyette’s syrup to give as gifts during his travels.

Guyette, who researches tree growth and the environment by examining tree rings, said he started sugaring in 1974 because he was young, had the time to do it and had some good maples on his property. “In the ‘70s there was a back-to-the-land movement; maple syrup seemed to fit right into that and we still love to eat it,” he said. “It’s fun. We actually like it more for the social quality of it and it’s a good excuse to get outdoors during that time of year.” 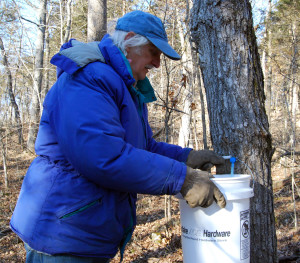 During the last week of January, Guyette, his wife Mary Lottes, and friend Kevin Hosman harvested 234 gallons of sap from 80 trees, some of which have produced sap every year since Guyette first tapped them more than 35 years ago.

The earliest sap is the highest grade, is lightest in color and has the most delicate flavor. As the season progresses the syrup becomes darker and has a stronger flavor. It’s good for cooking, especially for beans, pies and popcorn. Guyette makes a “maple maze” popcorn and also uses syrup in preparing meats. He recommends combining it with Worcestershire sauce for steaks.

After harvesting and filtering the sap, it’s boiled over a roaring fire in the sugar shack. If you’re considering trying to make your own syrup, allocate plenty of time to finish this part of the job, Guyette said.

The Science of Sugaring

Guyette said Missourians need to rethink some of the methods of maple syrup making for Missouri and research different types of climate and tree physiology models.

“Almost all the literature is based on the Vermont model, where they have 40-plus days of freeze thaw weather,” he said.  “Here we might just have one week for that. The rule of thumb is you don’t want to take much more than 10 percent of the tree’s energy.

“The Vermont model says fall tapping doesn’t work very well,” he said. “Here in Missouri, freeze-thaw wise, I’m not sure when winter began and fall ended this year,” he added.

Some of the questions to explore include when to tap, how big the taps should be and the number of holes per tree. Until that research exists for Missouri, consult an experienced sugarer like Rich Guyette. 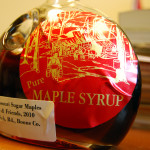 The finished product, complete with a personal label.

1)      Identify maples. Best to approach this task while the trees are still adorned with their characteristic three- or five-lobed leaves. You should only tap healthy trees that are larger than 12 inches in diameter at breast height.

2)      Tap your trees. When to tap, especially in Missouri, is open to question, but late January through March is the usual season. However, the freeze-thaw cycle is the most important indicator of when to tap, so cold nights followed by warm days are necessary for success. The osmotic pressure created by that cycle forces the sap out more quickly. You’ll need a few tools to do the job properly: a clean, sharp 7/16” fast-cutting tapping bit (not a carpenter’s speed bit), spouts (spiles), a small mallet to seat the spouts and a clean bucket. Taps should slope slightly upward to promote drainage.

3)      Collect your sap. Rate of flow depends on a variety of factors, including soil moisture, tree health and weather. If you’re new to sugaring, check your buckets often.

4)      Filter as you collect, and filter again when you pour the syrup into your pan or evaporator. You don’t want any debris or little critters in your mix. The goal is pure maple syrup.

5)      Boil. This is best done outdoors especially if you have a significant amount of sap. Guyette has a sugar shack to provide cover for his evaporator. If you’re harvesting from many trees, you’ll need to build a big fire to boil out the water. Your target temperature is 218 degrees Fahrenheit.  The average ratio of water to syrup is around 40:1. The first weekend Guyette and friends harvested 234 gallons of sap and reduced it to a little more than six gallons of syrup with an 87 percent sugar content. This part of the process can take several hours, so make it a festive occasion.

6)      Don’t overcook, or you’ll end up with maple sugar, not syrup. After letting it settle for a few days, bring it to a boil one more time at 219 degrees. Filter it one last time as you bottle. Enjoy!