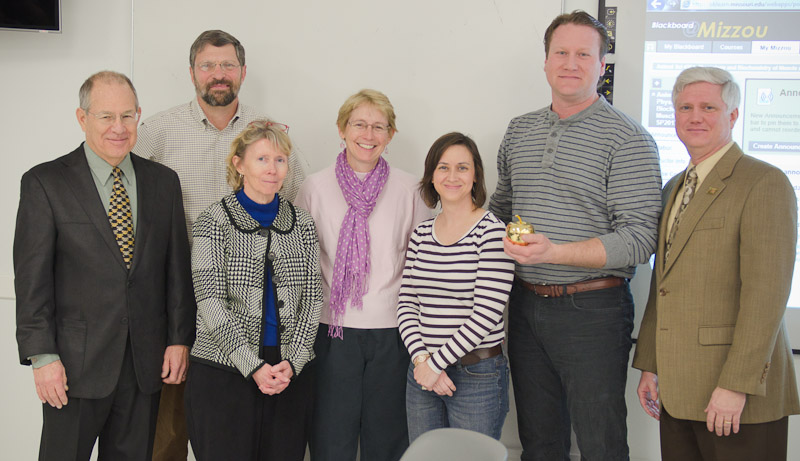 On a cold and foggy morning, students gathered in an Animal Science classroom to learn about muscle foods.  They got a quick course in Golden Apples, however.

Bryon Wiegand, associate professor of animal science, had his class interrupted for a surprise presentation of a CAFNR Golden Apple.  The award recognizes faculty in the College who excel and go “above and beyond” in teaching and/or advising.

“Animal Sciences is extremely fortunate to have Bryon onboard, in high gear, and on task, excelling at managing the demands and missions of our Division,” said Rodney Geisert, who made the nomination.  “His roles and responsibilities are far above the traditional norms of academia. There are few individuals with the breadth and knowledge to fill his shoes.”

Wiegand teaches Live Animal and Meat Evaluation, Physiology and Biochemistry of Muscle Foods, and Meat Investigations, among other courses. His research projects have been funded by Pioneer-DuPont Corporation, the Missouri Beef Industry Council, BASF Corp., the National Pork Board and the Missouri Life Science Research Board.

“His student reviews are among the highest in the Division and numerous students have indicated how much they learned from his courses,” Geisert continued. “His excellence in undergraduate teaching was recognized nationally through the Midwest Section of American Society of Animal Science 2009 Outstanding Teacher Award and the MU 2011 Provost’s Junior Faculty Teaching Award.” 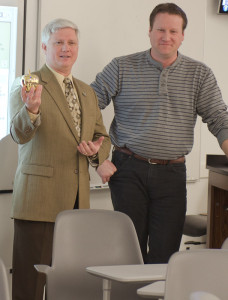 To be eligible for the award, faculty members must demonstrate clarity, variability and enthusiasm in their teaching. Winners need to be accessible to students, helpful, personable and act as a mentor who students can turn to for advice and direction. Nominees should encourage creative work.

“Bryon is a critical key in MU’s educational efforts to educate future producers and food industry leaders,” Geisert said.  “He is an individual who can bridge theory and application.  His Muscle Foods course is like no other at MU, giving undergraduates a unique perspective into the complexities associated with the transition of a meat animal to food and byproducts.  He not only discusses the biological and biochemical transformations that occur, but also the moral, ethical and regulatory issues as well.”

Wiegand uses the process of making soap – a common task in past generations – to teach the chemistry of fats and saturation versus unsaturation.

Bringing Back the Meats Judging Team

“Despite his busy schedule with teaching, research, numerous extension activities and supervision of the MU Abattoir and Meat Processing Laboratory, Bryon actively recruits students to become involved in the meats judging team,” Geisert said. “He has spent countless hours traveling and coaching – more recently supervising a graduate coach – to prepare his team for contests.”

The MU meats judging team was re-established four years ago. “Bryon has not only maintained a team but helped continue to increase student interest in the team,” Geisert said. “These teams have been highly competitive which speaks highly of Bryan’s dedication and ability to motivate students to become future leaders in the meat industry.”