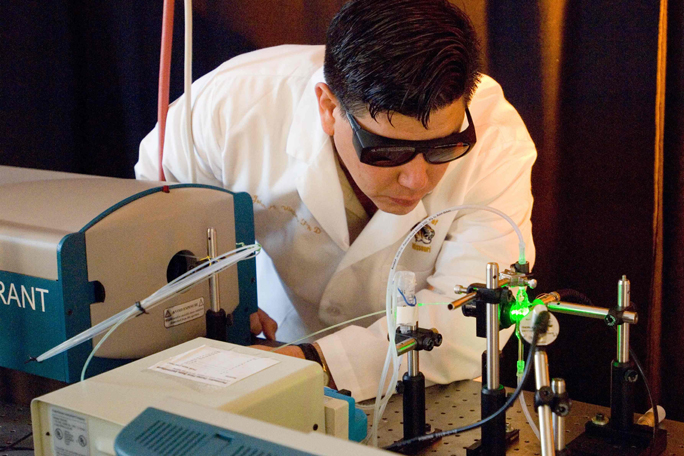 Early detection of melanoma, the most aggressive skin cancer, is critical because melanoma will spread rapidly throughout the body. Now, University of Missouri researchers are one step closer to melanoma cancer detection at the cellular level, long before tumors have a chance to form.

Commercial production of a device that measures melanoma using photoacoustics, or laser-induced ultrasound, will soon be available to scientists and academia for cancer studies. The commercial device also will be tested in clinical trials to provide the data required to obtain U.S. Food and Drug Administration approval for early diagnosis of metastatic melanoma and other cancers. 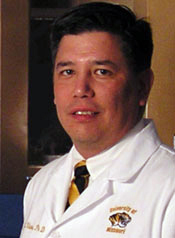 “Using a small blood sample, our device and method will provide an earlier diagnosis for aggressive melanoma cancers,” said John Viator, associate professor of biological engineering at the College of Agriculture, Food and Natural Resources and associate professor of biomedical engineering and dermatology in the Christopher S. Bond Life Sciences Center. “We compare the detection method to watching an eight-lane highway full of white compact cars. In our tests, the cancer cells look like a black 18-wheeler.”

Currently, physicians use CT or MRI scans for melanoma cancer detection, costing thousands of dollars. Viator’s photoacoustic device emits laser light into a blood sample, and melanin within the cancer cells absorbs the light. Those cancer cells then expand as the lasers rapidly heat and then cool the cancer cells, making them prominent to researchers.  The device also would capture the expanded cells, identifying the form of cancer the physicians are fighting and the best treatment method. 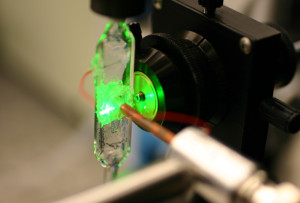 Viator has recently signed a commercialization license to begin offering the device and method to scientists and academia for research. They are also preparing studies for FDA approval for clinical use, which is expected to take approximately two to three years. Viator says the final device will look similar to a desktop printer, and the costs to run the tests in a hospital would be a few hundred dollars.

“We are attempting to provide a faster and cheaper screening method, which is ultimately better for the patient and the physician,” Viator said. “There are several melanoma drugs on the horizon. Combined with the new photoacoustic detection method, physicians will be able to use targeted therapies and personalized treatments, changing the medical management of this aggressive cancer. Plus, if the test is as accurate as we believe it will be, our device could be used as a standard screening in targeted populations.”