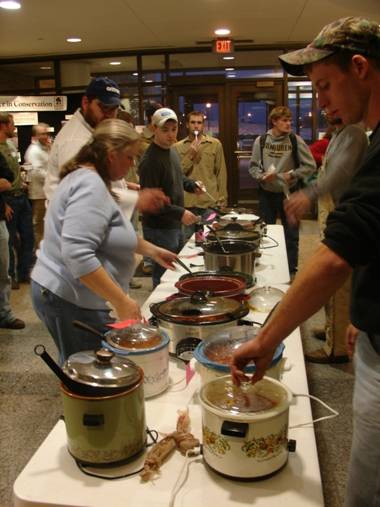 CAFNR folk took Collaborating for the Greater Good to a whole different level at the holidays. Efforts around the College focused on helping the less fortunate – all while injecting that signature CAFNR creativity and camaraderie!

Many departments adopt a family for the holidays – but each puts their own twist on how they participate in this giving opportunity.

The School of Natural Resources holds several good-natured (and often delicious!) competitions to raise funds for their adopted family. In addition to a donation box for gifts, they also hold a Departmental Challenge for Charity and a Chili Cookoff each year. The SNR Student Council oversees the efforts, although many across the school participate.

In the challenge, the four departments compete by adding coins (positive points) or bills (negative points) to their respective jars. Nearly $310 ended up in the four containers at the end of the war – Soil, Environmental and Atmospheric Sciences was the winner with 5,375 points!

“This all brought a smile to the Grinch’s face,” said Bruce Cutter, who communicated the festivities’ outcome to SNR folk. Cutter is the associate director of academic programs in SNR and professor of forestry.

The Community Development Extension staff and the Rural Sociology faculty adopted a family for the holidays as well, as they have done in the past. Sharon Gulick, state extension specialist, community economic and entrepreneurial development, headed up the effort and delivered all the gifts.

Departmental staff were each able to select an item off a display in the break room, which had Post-It notes with different items the mother had requested. Participation was optional and anonymous, but enjoyable, Gulick said. She estimates about 12 departmental faculty and staff members joined in.

“We decided to do this a couple of years ago rather than give each other small gifts at the holidays,” she said. In addition to items for a child and adult, any extra money donated went toward a grocery gift card and card to Wal-Mart to help the family purchase any other items they might need for the holidays.

Plant Sciences also turned their usual holiday gift exchange into an opportunity to help others three years ago. Each year they had changed the theme of their exchange, said Business Manager Susan Lasley – movie exchanges, ornament exchanges. “But after a while you sort of run out of new ideas,” she said.

“We talked it over and decided we would adopt a family who was less fortunate, and the money we’d been using for a gift exchange we would put towards the family,” she said.

Faculty and staff in the division now decorate a tree with ornaments detailing the adopted family’s Christmas wishes. The response is very good, Lasley said, and the office staff enjoys shopping for the family in need with donated cash and then holding a party to wrap the gifts.

“This year they asked that the gifts not be wrapped, so we missed that part of the fun, but I feel like we have enjoyed giving to those in need more than we enjoyed the trinkets we were buying each other,” she said. “We are so happy to have all of our DPS faculty and staff participating in this program.”

CAFNR’s Office of Research and Extension contributes to a different charity each year – but it’s always an organization that works with animals, plants or food, said Beverly Spencer, executive staff assistant II. Anyone can suggest an appropriate charity — in the past they have given to the Central Missouri Humane Society and the Food Bank for Central and Northeast Missouri, for example. This year, Spencer said she received a flyer in the mail for Heifer International and, after researching the group, suggested contributing to that organization this holiday season.

Heifer International provides livestock to families around the world to improve nutrition and generate income in sustainable ways. With the $420 the CAFNR office raised through voluntary donations, they were able to purchase a water buffalo, a goat, a hive of honey bees and a flock of chickens. Spencer said she especially appreciates this charity because they ask those they serve to not only go through training to care for the animals, but also have them sign a promise to pass along one offspring to another family in their village who has similarly gone through the training – “it’s a forever-giving system,” she said.

Spencer said their office staff used to go out for a holiday lunch, but decided about five years ago that since everyone already has many chances to celebrate at the holidays, it would make more sense to instead provide something to those less fortunate.

“It’s kind of special,” she said. “It makes you feel really good.”

Thanks to everyone in The College who reached out this holiday season to those in need – whether through an office initiative or personally. CAFNR truly does care! 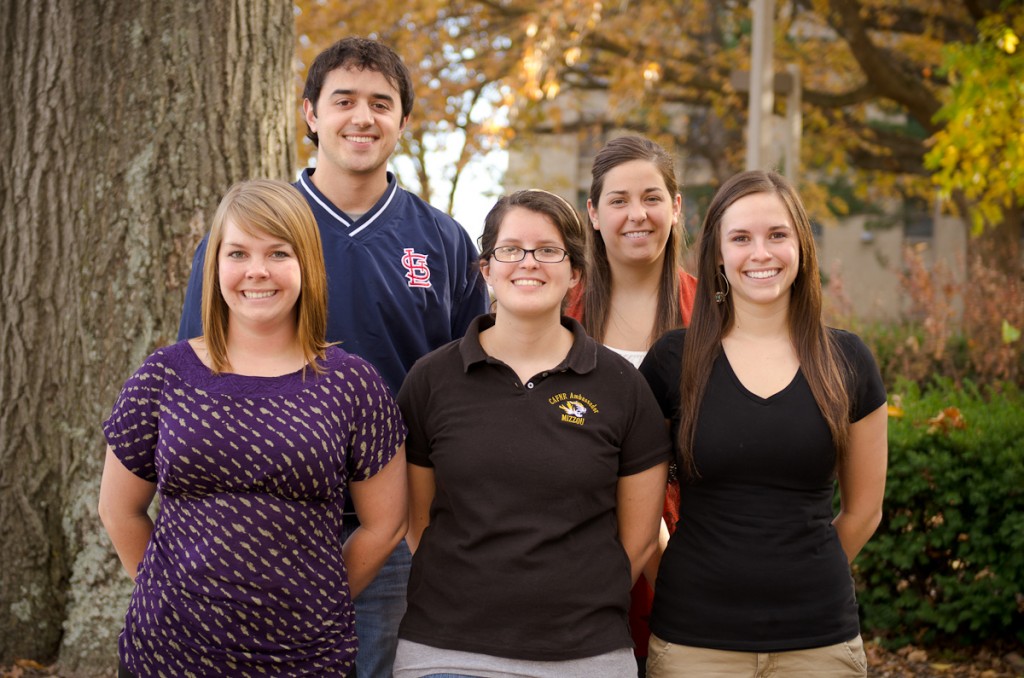 CAFNR Food Science Association students helped a Columbia-based non-profit group, and a wounded … Expand ▸CAFNR Food Science Association students helped a Columbia-based non-profit group, and a wounded Marine veteran, pack care packages for Marines stationed overseas. The students worked with Marine Parents, an organization that supports military members and their families. The students helped with the organization’s Care Package Project that ships approximately 1,200 boxes of food and necessities to Marines deployed to combat zones four times a year. The students packed boxes alongside Iraq War veteran Marine Gunnery Sergeant Nick "Gunny Pop" Popaditch. Popaditch was in Columbia to speak at the Marine Parents banquet about how he overcame his disabilities caused by a RPG (rocket-propelled grenade). Gelsey Minnick, vice president of the Food Science Association, said the association also donated $150 to Marine Parents to purchase food and other items. “This is a great way to help out a local organization while showing our appreciation for the men and women overseas.” Members of the MU Food Science Association who helped pack care packages were: Charlie Schinsky, senior from St. Louis and Maddie Faust, sophomore from St. Louis (left to right, back row); Gelsey Minnick, junior from Atlanta, Ga.; Becky Haynes, junior from Liberty; and Kimmy McGrath, junior from Warrenton (front row).