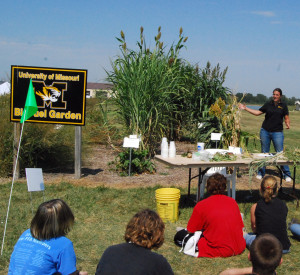 Flying over the Missouri and Mississippi Rivers, the cottonwoods, willows and switchgrass you might glimpse could soon power the jet engines propelling you through the air. Shibu Jose, director of MU’s Center for Agroforestry, envisions a 10-state biomass corridor that could fuel economic growth, power vehicles and jet planes and provide valuable ecosystem services throughout the region.

Presenters covered a variety of topics related to bioenergy from green nanoparticles and biocatalyst enzymes to developing a biobased regional economy.  Stakeholders, including land owners, fuel refiners, and conservationists, met after the symposium to strategize how to advance a biobased economy in the heartland of the U.S.

“Our nation has a goal to use 36 billion gallons of biofuels by 2022,” Jose said. “We can produce about 15 billion gallons from ethanol, but the rest has to come from cellulosic or advanced biofuels. It’s clear based on our national policy that we need to produce the biomass to produce the biofuel.” Jose’s innovative vision was recently featured in Mizzou Magazine, as part of their cover story on sustainable energy.

Upland Agroforestry buffer (oak trees and grass) on a corn-soybean rotation watershed at the Greenley Research Center, near Novelty, Mo.

MU researchers, including Ranjith Udawatta, research associate professor in CAFNR’s Soils, Environment and Atmospheric Sciences department, have documented improved soil quality and reduced nutrient and sediment runoff from agroforestry and grassland buffers in row-crop systems at Greenley Research Center near Novelty, and in grazed pasture at the Horticultural and Agroforestry Research Center (HARC) in New Franklin.

The results bolster the biomass corridor concept, which includes a combination of perennial grasses, such as switchgrass and miscanthus, cottonwood and willow trees, sweet sorghum and energy cane.

Such biofuel plants have powerful potential attributes. Switchgrass and miscanthus can be harvested every year for 15-20 years before replanting and cottonwood and willow trees can reach 20 feet in just three years. That means sensitive lands like floodplains don’t have to be disturbed each year for planting, which loosens the soil and can lead to sediment flowing downriver. 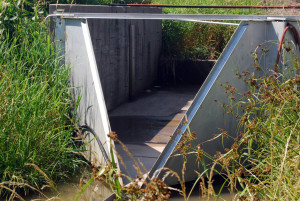 Farmers can grow biomass on marginal land that is subject to frequent flooding, and rather than risking losing their crop, they’re gaining another source of revenue, improving water and soil quality, creating wildlife habitat and helping foster a regional, sustainable fuel economy.

Jose imagines regional biorefineries for processing biomass into pellets, which could then be shipped to large-scale commercial refineries across the Midwest. The whole system — growing, harvesting, shipping and processing — could generate more than a billion dollars annually along the rivers and create thousands of new jobs.

“In the past we used to do all of these things for the sake of conservation, now we are also telling land owners you can still get that conservation benefit with a crop you can sell; it’s a market-based approach to conservation,” Jose said.