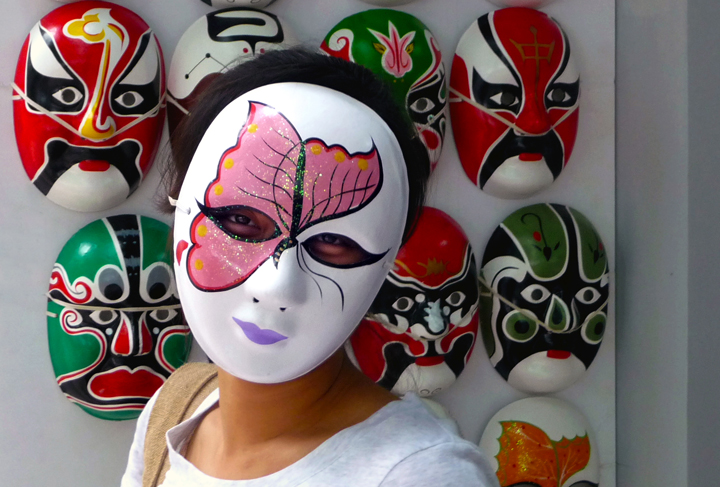 Food is at the center of a revolution in China.  Chinese are dining out more and increasingly wolfing down pizzas and Kentucky Fried Chicken.  Ag exports and imports are booming.  Farmers are flocking to the cities, triggering a rapid mechanization of ancient farms.  And the whole thing is growing at double-digit rates.

In June, 20 Mizzou College of Agriculture, Food and Natural Resources graduate food science students will travel to one of China’s largest science universities to experience this wildly expanding market first hand.  The visit is designed to prepare them for careers in a global food market where China is a major consumer and producer. 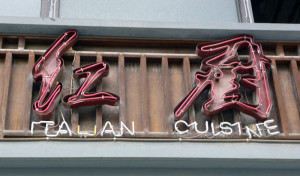 Diners in China are becoming more adventurous, chomping down pasta, tacos, BBQ and other exotic foods.

The trip will immerse the students in China’s changing cuisine and business practices by touring food factories and supermarkets, taking a bite of what the Chinese are eating, and hearing from the leading players, said Ingolf Gruen, associate professor of food science at MU who will lead the trip.  He’ll introduce the students to the differences in U.S. and Chinese food production practices, visit traditional Chinese companies, and speak with representatives of foreign food companies investing in China.

The visit is one of several CAFNR Study Abroad programs where students investigate global aspects of their studies by packing their bags and going there.  Each year, the program places 150-175 students in various disciplines to various parts of the world, said Matt Pourney, director of the program.  Last year, students went to Belgium to study European governmental and trade policies, and to the Czech Republic to learn more about that country’s agricultural economics. Other students traveled to Thailand to look at biodiversity and conservation work there.  Students interested in a career in horses flew the Atlantic to look at the Scottish equine market.

“Study abroad gives students a unique opportunity to gain a global perspective in their field of study,” Pourney said.  “It gives them a first-hand look at the interconnected nature of the world today and how they can operate and conduct business among other cultures.”

An Immense and Global Market

The food industry in China has grown rapidly, driven by the boom of the Chinese economy, rapid urbanization and increasing disposable income.  This growth has led to new consumption patterns in China, including growing numbers of consumers dining out and trying “foreign” cuisine. 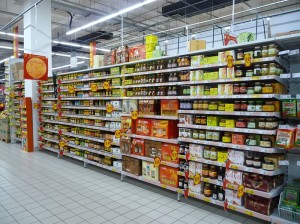 Chinese supermarkets have opened to the foods of the world.

According to Euromonitor International, a market research organization serving the European Union, China’s consumer food market has grown from $133 billion in 2004 to $294 billion in 2009, an annual growth rate of 12.5 percent over a five year period.  In 2014, Euromonitor estimates this will be a $500 billion market.

U.S. companies have noticed and are expanding operations in China.  Yum, which runs KFC and Pizza Hut restaurants, announced in April that it will buy the remaining stake in Little Sheep, a Chinese restaurant chain. Yum bought a 20 percent share in Little Sheep in 2009 for $63 million and increased its shareholding to 27 percent last year.  Yum’s revenue in China increased 18 percent to $5 billion last year, according to Euromonitor. 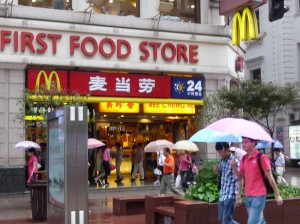 McDonald's was one of the first American companies to build a market in China.

Snacking is growing trend in China, too – something the European Union has noticed.  A robust growth of 46 percent in ice cream consumption is expected in the next four years. The EU is encouraging its members to export more products and form more joint dairy ventures in China.

China is also the world’s fastest growing wine consumption market, according to Australia’s version of the USDA. China is that country’s fourth largest bottled wine export destination with sales of $87 million in 2009, up from only $6 million in 2004.

Agriculture and Agri-Food Canada, the Canadian version of the USDA, anticipates that country’s Chinese imports of agricultural and seafood products to increase at almost 18 percent per year while the value of exports from Canada will increase at more than 25 percent per year.

MU students will stay in residence halls at Jiangnan University, located in Wuxi, Jiangsu, China.  JU is one of 100 universities (of approximately 1,700 in China) involved in the Ministry of Education’s Project 211 – a plan to raise the research standards of high-level universities and promote socio-economic development.  Project institutions are training four-fifths of Chinese doctoral students, two-thirds of graduate students, half of students from abroad and one-third of undergraduates. They hold 96 percent of the state’s key laboratories, and utilize 70 percent of scientific research funding. 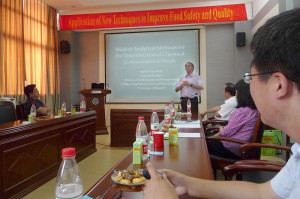 JU is about the size of MU with about 1,000 academic staff and 30,000 students.  Its areas of special emphasis include agriculture, food science, medicine, economics, law and biotechnology.  Its National Key Lab of Food Science and Technology, sponsored by the Ministry of Science and Technology, is the only one of its kind in China.  Gruen and other CAFNR faculty members have partnered with their JU colleagues to produce a curriculum to prevent contamination in China’s food exports.

“The Study Abroad course to China is the third installment of an expanding set of course offerings to MU Food Science students, which include visits to Germany and New Zealand,” Gruen said.  “It is our way of getting our students ready for the global nature of the food industry.”