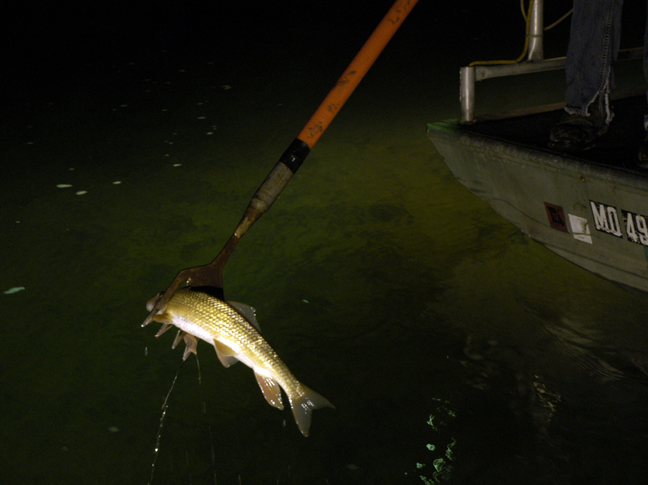 Most fishermen call it a day when the sun goes down, but on this December evening Landon Howell and his friends are just getting started.

Howell and Michael Stoops pilot a pair of flat-bottomed aluminum boats at speeds that would spell almost certain disaster for boaters unfamiliar with this stretch of the Current River. They deftly navigate upstream, dodging rocks, shoals and snags in the gathering darkness. Howell tells his two passengers, holding on to railings at the bow, where to stand to keep the weight evenly distributed.

The outboard motors idle and the boats shed most of their speed. Glaring halogen lamps powered by portable generators light up the clear, shallow water.

The men are looking for suckers, a type of fish that swims along river bottoms, vacuuming up algae, mollusks and aquatic bugs.

Conventional anglers regard suckers with disdain. Apparently, the feeling is mutual. “They don’t come to you like if you were regular fishing,” Howell says. “We’re pretty well just hunting them.”

Andrew Stoops and Steven Bird stab the water with gigs—long wooden poles with four-pronged metal spears at one end. 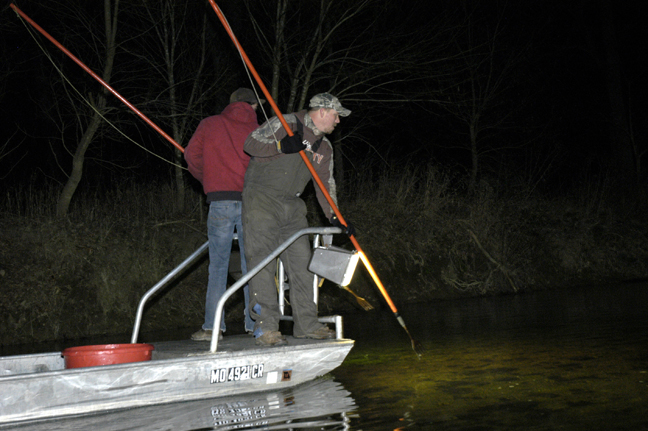 “It sounds crazy at first, but once you try it, it’s not too bad,” says Andrew Stoops.

Catching suckers with gigs is an Ozark tradition that goes back almost 200 years, says Mark Morgan, an associate professor at the University of Missouri School of Natural Resources.

Morgan is one of the few people to cast a scholarly eye on the gigging subculture. A researcher in the field of the human dimensions of natural resources, he has appeared on ESPN as an academic authority on catfish noodling, a barehanded angling technique that is illegal in Missouri.

As he learned about it, what impressed him was not so much the spectacle of catching fish with spears, but the way gigging serves as a bonding experience for families and their friends.

“It’s about people getting together to fish because they really love being outdoors, socializing with one another and eating fish on the riverside,” he said.

Several miles downstream, at the boat launch, the giggers’ friends and relatives are getting ready to fry the fish. A campfire crackles and propane burners heat up pots of cooking oil. 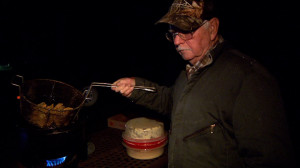 When the boats return, ironing boards are set up on a gravel bar for the messy work of filleting, scaling and removing the rib bones from the evening’s catch. Up at the campsite, Carl Younger, 51, uses a handy gadget to score the fillets before dredging them in cornmeal and seasoning. Scoring lets the hot oil penetrate the flesh, dissolving the small bones.

Younger’s father, 81-year-old Bud Younger, lowers a basket of fresh suckers into the oil. The fillets curl up as the batter turns brown and crispy.

“Suckers aren’t considered a delicacy, but once they’re fried up in this manner they’re truly great,” Morgan said.

Also on the menu are fried crinkle-cut potato slices and store-bought biscuits, which are fried, of course, then sprinkled with cinnamon and sugar.

The Current and Jacks Fork rivers and adjacent lands constitute the Ozark National Scenic Riverways, which is administered by the National Park Service. In spring and summer, tourists take to the rivers in canoes, rafts and inner tubes. Rod-and-reel anglers fish for trout and smallmouth bass. But during gigging season—mid-September through January—it’s mostly locals on the rivers.

For some giggers, the colder the better.

“When the water’s hot, the fish are no good,” said Bob Howell, who is Landon Howell’s grandfather. “They’ve got to be out of that real ice-cold water to be really good to eat.”

The 74-year-old Howell, who still avidly traps small game along the river, fondly recalls gigging with his father.

“My dad talked about going when he was a boy with his dad,” he recalls. “My great-great granddad came here in 1820, and from what records I’ve got, it was going on back then. I think that ever since people started settling on this river they’ve gigged these fish for something to eat.”

Gigging hasn’t changed all that much over the decades, despite some upgrades in the supporting technology.

“We never had none of these fancy lights,” Bob Howell said. “Just used regular old gas lanterns. And no motor on a boat. We’d just float down the river in an old wooden john boat.”

Staying in Touch With One Another and the Outdoors

Generations of giggers have kept this practice alive, but Morgan notes that the number of anglers is declining nationwide. “Slowly we are losing our connection with the outdoors,” he said.

“On average, sucker giggers participate in this activity for 25 years, going 11 times per season, so there must be something to it,” he added. “One of the lessons learned is that rural youth are on the river at night instead of on the Internet or watching television.”

That’s one reason why Morgan believes it’s important to study and understand this venerable but still-vital tradition.

“Sucker gigging is a significant part of Missouri’s cultural heritage,” Morgan said. “People in urban areas often look down on those in the Ozarks and think it’s maybe a hillbilly activity or redneck sport. But fishing is what America is truly about.”