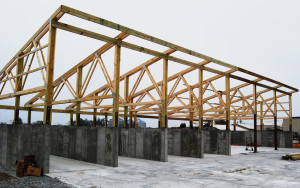 Like a small city, the University of Missouri trucks in tons of food each day to feed thousands of people.  At the end of the day, all of the orange peels, food scraps, used paper napkins and other leftovers leave campus to be dumped in the Columbia landfill. With more than 8,500 meals served per day, and an average of 4.5 ounces wasted each meal, more than 250 tons of food waste ends up in the landfill each year.

To Tim Reinbott, superintendent of the MU Bradford Research Center, a unit of the College of Agriculture, Food and Natural Resources, this process is inefficient.  He’s creating what he calls a “closed loop” system where food grown at Bradford is served by Campus Dining.  Then, that food waste travels back to Bradford to make compost to fertilize the crops grown there.  The new food, including tomatoes, peppers, squash and many other vegetables, then goes to Campus Dining, starting the cycle all over again.

It’s known as the “Zero Carbon Footprint Vegetable and Compost Production System,” and it’s the first of its kind nationwide.

“Students who throw it away get to eat it again,” Reinbott joked at a recent presentation on the project.

To turn the compost concept into a working project, Reinbott partnered with MU Campus Dining, Campus Facilities, MU Sustainability Office and the Mid-Missouri Solid Waste Management District.  He envisions not just a way to save money for the university, but create a working model that other universities, prisons and even small cities can use to cut costs and reduce pollution. According to government reports, food waste makes up 18 percent of the total waste stream in the U.S., and Americans toss out nearly 40 percent of the food they purchase. 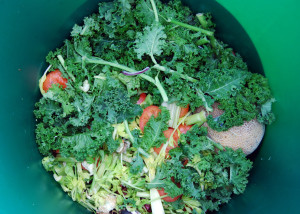 “It’s an opportunity for education and awareness for students, too,” said Eric Cartwright, executive chef for Campus Dining Services, which contributed $35,000 to build the facility. “There isn’t just a magic door where waste disappears into—something happens with what you don’t eat, or in the case of an apple core, the parts that aren’t designed to be eaten. If we can create a more closed loop it builds right back into what we’re trying to do which is to bring in more, fresher produce into our dining halls,” Cartwright said.

The Mid-Missouri Solid Waste Management District also awarded MU a $35,000 grant for construction costs. “It’s something new and there’s a need for recycling organics,” said Deanna Trass, district coordinator for the Mid-Missouri Solid Waste Management District.  “Anytime there’s an innovative way to repurpose things and keep them out of the landfill, we’re interested in making that happen,” Trass said.

At the heart of the plan is a high-tech version of something that generations of farmers and gardeners would recognize – a compost pile.

Construction of a 2,400 sq. foot, five-stall composting facility, called an Aerated Static Pile (ASP), was just completed at Bradford. On Friday, November 18, the first truckload of food waste and animal bedding was dumped in to start the cycle. Reinbott said that this process has already proven itself in other uses and eliminates many of the noxious gases, such as methane, that can escape into the atmosphere in open, non-aerated compost systems.

ASP composting is a system used to biodegrade organic material without physical manipulation. The blended waste mixture is usually placed on perforated piping, providing air circulation for controlled aeration. This accelerates the decomposition by encouraging the microorganisms to work harder, and the process works well for processing wet materials, such as pulped food waste.

Reinbott estimates that an MU ASP can accommodate at least two tons of waste material per day and can be continually added to.  This waste material will create approximately 175 tons of compost annually that can be applied to vegetable and field crops at Bradford to meet most, if not all, of the nutritional needs of the crops grown there.  Reinbott pointed out that this will almost eliminate the need for nitrogen fertilizer, an expensive product that is one of the largest sources of carbon in agricultural production systems.

Composting 250 tons of food waste is just the beginning of the savings and pollution reduction, he pointed out.  Waste paper products, about 1,500 tons of the stuff are produced by MU each year, can also go into the ASP, saving a hunk of the $350,000 that MU spends annually to haul the stuff to a landfill. Used MU animal bedding and manure – also about 1,500 tons a year – will go into the ASP for conversion to compost.

It takes about five weeks for the ASP system to convert such waste into field-ready compost, Reinbott said.  The process is mostly bio-chemical, needing electricity only to force air through the compost piles. Biological engineering students Logan Forsythe and Brent Elliot will work with Reinbott to monitor the temperature of the piles, run experiments on the most efficient ways to create high quality compost and help develop a protocol for converting waste vegetable oil from the dining halls into biodiesel. 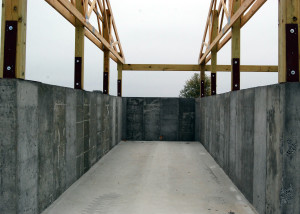 Reinbott has experimented with mixtures of Mizzou waste streams for years and has come up with a food, paper and animal refuse formula that is the quickest and most efficient way to make compost.  In fact, his model may create more compost than Bradford and MU can use, so Reinbott is looking at ways to sell the surplus to local farmers. He said that high quality compost known as “Mizzou Doo” packaged in black and gold bags might be available for purchase as early as next spring.

“This closed-loop cycle can be further strengthened by converting waste vegetable oil collected from Campus Dining – about 3,000 gallons per year – and converting into biodiesel,” Reinbott said.  “This fuel can be used to power the trucks required to transport the compostable materials to Bradford and then deliver the vegetables back to campus.  This fuel can also power the tractors and equipment used in vegetable production and power the diesel engines to run the ASP fans.  In essence, the system will have a zero carbon footprint.  Having an ASP composting facility in place is the first and essential step to getting the entire process started.”

Currently, Reinbott noted, some landfills are experimenting with large-scale composting with mixed results.  “One drawback to many systems being used is the broad range of materials that find their way into the waste stream, resulting in an inconsistent final product,” he said.  “Making use of a known source of raw materials will enable us to much better control inputs and thus produce more uniform outputs.”

Bradford Research Center is a both an outdoor classroom and a research laboratory that develops better and more efficient food.  Each year more than 7,000 people – from farmers and industry experts to high school students – tour Bradford to learn about best practices in agriculture and wildlife management.  More than 200 research projects, from plant breeding and weed control experiments to wastewater management, are conducted on 25,000 dedicated research plots.

Reinbott sees the ASP project as a way to introduce large-scale composting techniques to the next generation of agricultural specialists through student work-study and internship programs.  He foresees ways to agricultural journalism students get involved by educating the public on the model and rural sociology students on tracking the economic impact. “Students will be involved in everything from production to marketing,” Reinbott said.

While the program has been carefully planned around known scientific information, Reinbott said that he has one fantasy about the project.  “My dream is that someday nothing will be trucked from MU to a landfill,” he said.